Land protection and management practices provide big gains for both wildlife and climate.

MassWildlife is proud to incorporate climate change adaptation principles into our mission to conserve biological diversity in Massachusetts. We apply science-based habitat restoration and management practices today that anticipate emerging conditions under climate change in the future.

Climate change is driven by increased concentrations of greenhouse gases, mainly carbon dioxide, in the atmosphere. Forests reduce greenhouse gasses by storing large amounts of carbon as they grow. In fact, the carbon storage capacity of forested lands that are protected from development, gets larger with every passing year (Figure 1). By protecting and managing the 168,000 acres of Wildlife Management Areas (WMAs), MassWildlife plays a substantial and growing role in helping the Commonwealth meet its greenhouse gas emission reduction goals. Land protection and management are also critically important for the conservation and restoration of wildlife habitat, including habitats for our most vulnerable plants and animals.

Figure 1. MassWildlife lands have a net annual increase in carbon storage even after accounting for carbon release associated with habitat management activities.

Although most (78.8%) of WMAs is maintained as forest, many types of wildlife rely on open habitats, including declining populations of shrubland songbirds, native pollinators, and other Species of Greatest Conservation Need identified in the State Wildlife Action Plan. By managing a limited portion of our land as grassland, shrubland, and young forest habitat, MassWildlife ensures that all of the Commonwealth’s wildlife can thrive. Shrubland and grassland habitat restoration may involve removing trees, and although some carbon is released during management, the carbon budget analysis for MassWildlife lands shows that carbon storage provided by forest growth far exceeds loss (Figure 2).

Since 2006, about 0.02 million tons of carbon has been released as a result of habitat management on MassWildlife lands, compared to 1.2 million tons of carbon have been stored on MassWildlife lands through forest growth (Figure 2).  Carbon loss through habitat management for rare and declining species is just 1.7% of new carbon storage by growth on WMAs. 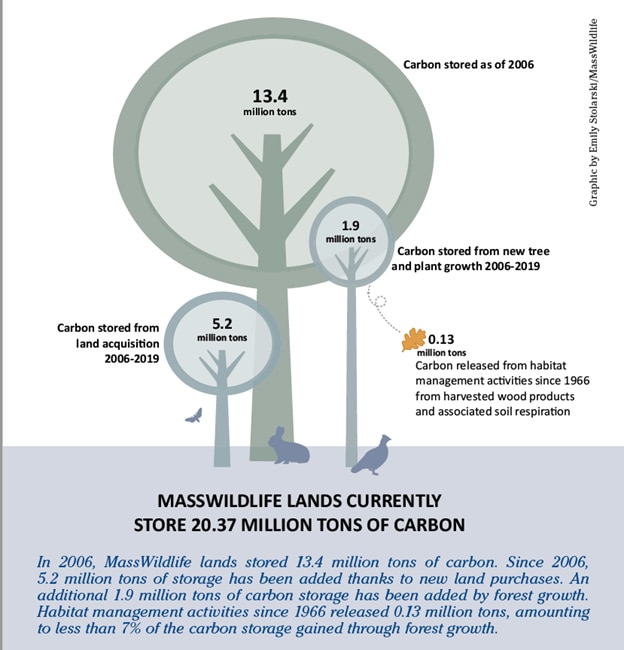