Geoforms—the physical structures of the underwater marine environment—include underwater topography, living (biogenic) structures that create their own physical environment, or man-made features such as shipwrecks, breakwaters, and dredge areas. Physical structure is a prime determinant of habitat for nearly all the bottom-dwelling marine organisms in Massachusetts waters. To understand and map habitat, therefore, it is imperative to map geoforms.

One way to characterize the seafloor is by mapping the underwater landscape features that are analogous to terrestrial plains, valleys, and hilltops. On land, habitat is defined by these landscape features (in part) due to their interaction with aspects of the physical environment, such as light intensity, wind exposure, and drainage. These landscape features in turn can be used as predictors of habitat suitability, community composition, and species distribution and abundance. Seafloor geoforms are similarly a highly important aspect of marine habitat. (See figure below). 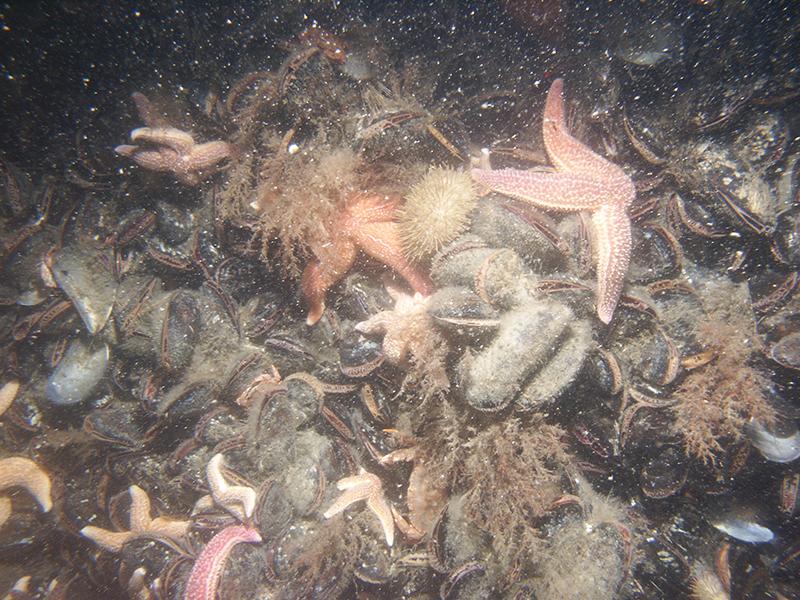 One common geoform in Massachusetts is characterized by a rugged seafloor composed of cobbles, boulders, and bedrock ledge. This complex, three-dimensional matrix is correlated with high biodiversity and is essential to the life history of many species of sponges, urchins, lobsters, fish, and attached algae (seaweed). Click to see the full size image (PDF, 3 MB).

Geoforms also include living structures. For example, as successive generations of oysters settle and grow, the resulting oyster reefs become highly complex, with many structural irregularities and crevices that provide microhabitats for many different species of animals ranging from worms to fish.

Small fishes, including silversides and menhaden, find shelter from predators and from strong tidal currents at oyster reefs. Many of these fishes feed extensively on the larval animals associated with reefs, before eventually becoming prey themselves to larger fishes. Oyster reefs are also used as a nursery habitat by many important recreational and commercial species including flounder and striped bass. Sea stars, mud crabs, and some mollusks prey on the oysters themselves.

While not typically thought of as such, man-made structures are also geoforms and can either be habitat themselves or alter the surrounding physical habitat in profound ways. These changes are sometimes done purposefully to create specific habitat types in areas where they do not naturally occur (e.g., artificial reefs that serve as shelter and foraging areas for some fish), but more often are a byproduct of resource extraction or development for other purposes. For example, dredged channels deepen subtidal habitat, reducing light and increasing water flow, while wind energy towers and jetties create a hard physical structure analogous to an artificial reef.

CZM is mapping geoforms using a variety of different data including bathymetry, National Oceanic and Atmospheric Administration (NOAA) charts, sediment samples, and bottom photos. Brought together, these features provide a better understanding of the physical structure element of marine habitats at multiple scales. 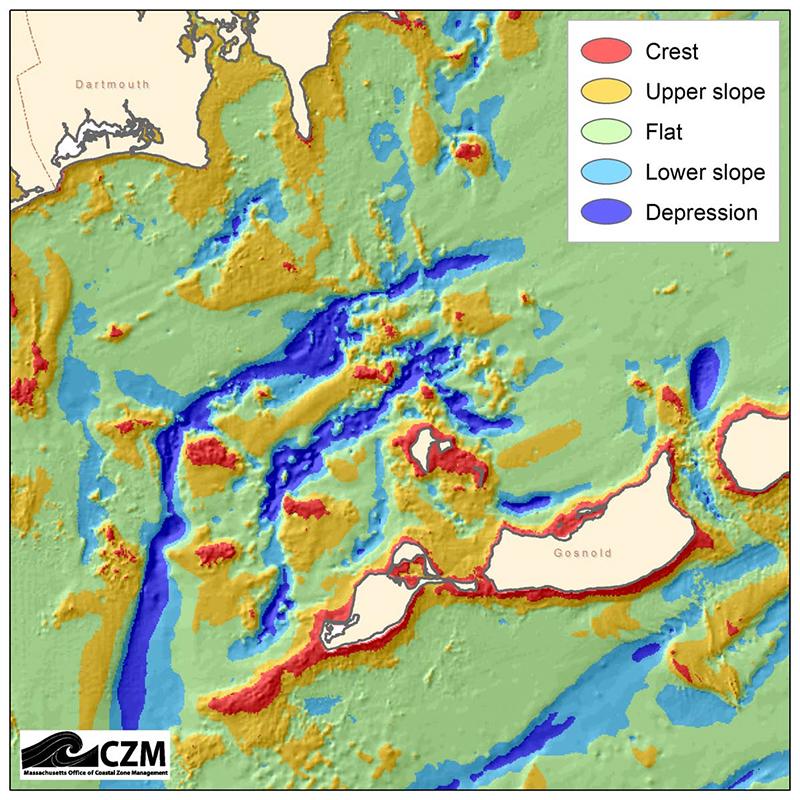 A geoform map of the mouth of Buzzards Bay, between Dartmouth and Gosnold. The geoforms represented in this map are: crests, upper slopes, flats, lower slopes, and depressions. Click to see the full size image (PDF, 186 KB).