History of the John Adams Courthouse

The historic John Adams Courthouse was constructed in 1894.

Designed by Boston city architect George A. Clough (1843-1916), the courthouse was completed in 1894 at a cost of approximately $3.8 million. Clough's reliance on classical elements such as arches, columns, pediments (triangular forms), and cornices (ornamental moldings) typifies this period of American architecture.

The original occupants of the building (the Supreme Judicial Court, the Social Law Library, the Suffolk County Superior Court, the Boston Municipal Court, and the Suffolk County Probate and Family Court) required more space by the first decade of the twentieth century. In 1909, two additional stories were added to the structure. The addition, also designed by Clough, took the form of a high sloped roof, known as a mansard roof. 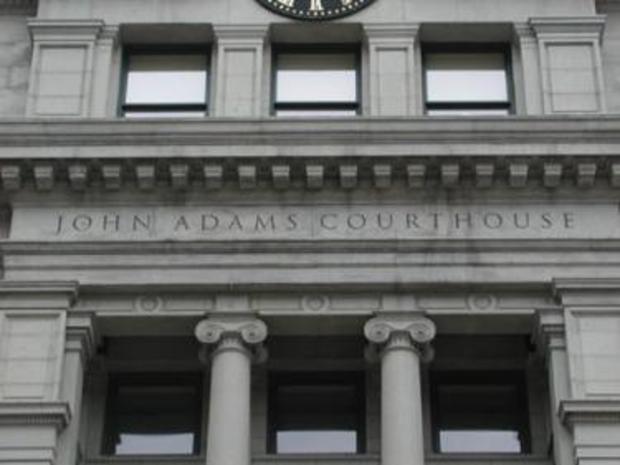 On May 14, 2002, Acting Governor Jane Swift signed An Act Designating the Old Suffolk County Courthouse as the John Adams Courthouse in honor of John Adams, author of the Massachusetts Constitution, former Chief Justice of the Supreme Judicial Court, and second President of the United States. At a ceremony celebrating the designation, then Supreme Judicial Court Chief Justice Margaret Marshall remarked:

"John Adams was the ingenious architect of our Constitution. He believed passionately that all people were born with certain rights that no government could take away. Driven by this vision of freedom, he devised an entirely new structure of government, one that had never been tried before. His draft of the Massachusetts Constitution proposed a balanced government, where the judicial branch existed independently but co-equally with the Executive and the Legislature. The notion that judges would decide cases based on the rule of law rather than the demands of the powerful was radical for its time. Yet the idea of an independent judiciary has become one of the great cornerstones of human freedom."

The Great Hall: History and Design

The Great Hall serves as a ceremonial space, an exhibition space, and a grand internal corridor linking Pemberton Square and Government Center to Ashburton Place and the Massachusetts State House on Beacon Hill. Albert Haberstroh, of the Boston firm of L. Haberstoh & Son, designed the mural decorations in the Great Hall.

Bands of classical coffers with rosettes demarcate the barrel vaulted ceiling of the Great Hall. The ceiling's central painted panel features the seal of the Commonwealth, which depicts a Native American holding an arrow pointed downward in a gesture of peace. A blue ribbon surrounding the figure contains the Latin phrase, "Ense petit placidam sub libertate quietam" ("By the sword we seek peace, but peace only under liberty"). 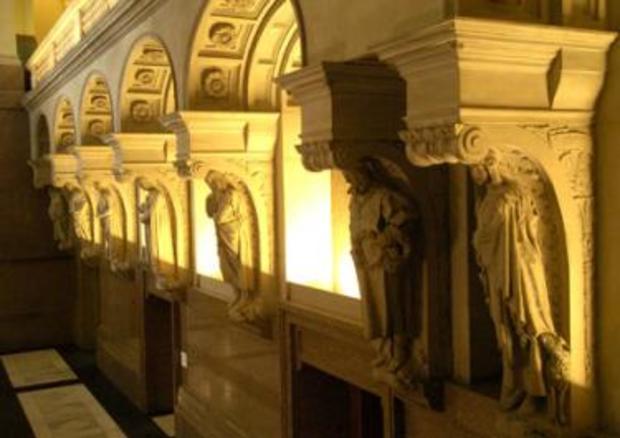 Also in the Great Hall is a bronze statue of the noted Massachusetts attorney and statesman Rufus Choate (1799-1859). Choate was regarded as Boston's finest trial attorney of his time and served in the United States House of Representatives (1830-1834) and the United States Senate (1841-1845). He was also a great defender of the institution of an independent judiciary as envisioned by John Adams and spoke eloquently in its defense at the state constitutional convention of 1853. 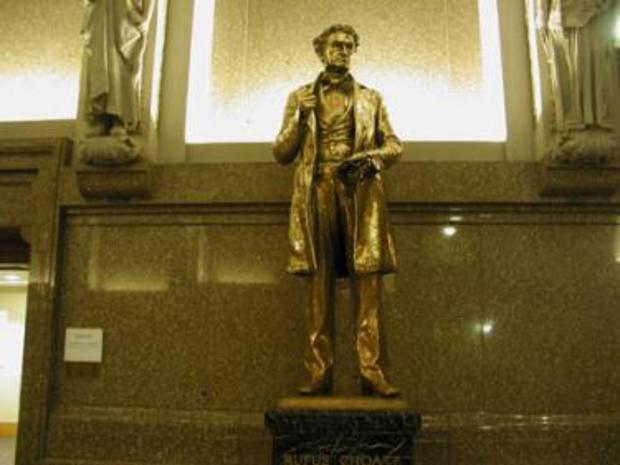 The Rufus Choate statue was sculpted by Daniel Chester French (1850-1931) for the original opening of the courthouse. French is perhaps best known for the statue of Abraham Lincoln sited in the Lincoln Memorial in Washington, D.C. Another of his well-known works is the Minute Man statue at Concord's North Bridge in Minute Man National Historical Park. Prior to the statue's recent cleaning, only Choate's left toe gleamed--a condition attributable to the routine practice of attorneys rubbing the litigator's foot for good luck.