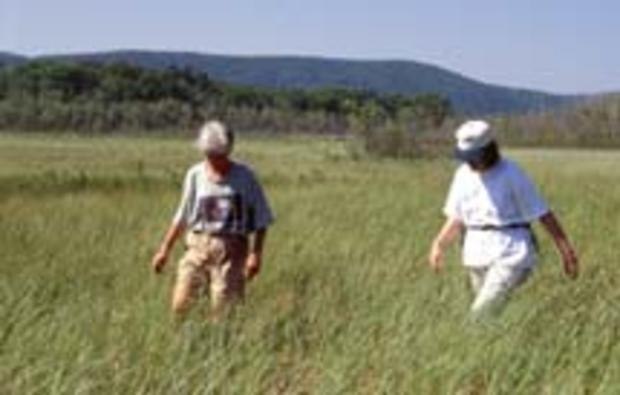 The Kampoosa Bog Drainage Basin ACEC is approximately 1,350 acres in size and is located in the towns of Lee (225 acres) and Stockbridge (1,125 acres) in Southern Berkshire County. The Kampoosa drainage basin is part of the larger Housatonic River watershed.

The heart of the ACEC is Kampoosa Bog and its associated surface waters, wetlands, groundwater and rare species habitat. Scientifically, Kampoosa is not a bog, but a fen, contained in a small basin (the Kampoosa drainage basin), with an inflow of calcareous cold groundwater. Scientists refer to Kampoosa Bog technically as a Lake Basin Graminoid (grass-like) Calcareous Fen. Due to the critical ecological importance of surface and ground water to the fen and the high concentration of rare species found there, the boundary of the ACEC is designed to approximate the sub-drainage basin of Kampoosa Bog.

The Kampoosa Bog ACEC contains one of the Commonwealth's most significant rare species habitats. The fen and adjacent areas within the ACEC provide habitat for at least 19 state-listed rare species, within a relatively small area of 1,350 acres. According to the Massachusetts Natural Heritage and Endangered Species Program, Kampoosa Bog supports not only a very high number of state-listed rare species, but provides habitat for several rare species that are found at very few other sites in Massachusetts. According to the Natural Heritage Program, "preserving the integrity of this calcareous fen is critical to maintaining one of the premier rare species sites in Massachusetts." The Nature Conservancy has given Kampoosa a global ranking in terms of its significance, meaning it is imperiled throughout its range due to rarity or highly vulnerable to extinction due to biological factors, and requires "the highest priority for protection."

Highly significant archaeological resources are also located within the ACEC, determined by the Massachusetts Historical Commission as eligible for listing in the National Register of Historic Places.
Following ACEC designation, the Kampoosa Stewardship Committee was formed by a variety of local, regional and state private and public agencies and organizations, as well as interested citizens, to preserve and restore the resources of the ACEC by fostering community stewardship.