What is the Headstart Program and how does it help the turtles of Massachusetts?

The Northern Red-bellied Cooter Headstart Program began in 1984 as a way for MassWildlife’s Natural Heritage and Endangered Species Program (NHESP) to help the survival of northern red-bellied cooters in Massachusetts, a turtle listed on both federal and state endangered species lists. The Headstart Program is part of MassWildlife’s overall turtle conservation effort, in addition to raising awareness, explaining the threats to native turtle populations, and providing information on ways residents, educators, and conservationists can help turtles in their communities.

Headstarting is a conservation technique in which turtles are raised in captivity to give them an advantage to surviving into adulthood.

The process begins when turtle hatchlings are removed from the wild in early fall and paired with educational and scientific facilities from across the state. For 8–9 months the turtles live in a warm aquarium environment with unlimited food. This method greatly accelerates the growth of the turtles and reduces the likelihood of death from predators during a turtle’s first year of life when they are most vulnerable. This gives each turtle a "head start" at life.

At the time of release, the headstarted cooters which are less than a year old are approximately the size of a 3-year-old in the wild. Before they are released, MassWildlife biologists insert a Passive Integrated Tag (PIT) into the turtle for identification, tracking, and monitoring. The turtles are then ready to be released in areas where they hatched or in a nearby, suitable reintroduction site.

When the Headstart Program began, the estimated population of northern red-bellied cooters in Massachusetts was only 300. Now the population is over 1,000 adults. This is one of the longest and most intensive freshwater turtle headstart program in existence.

Since its inception, 4,700 headstarted turtles have been released at 34 sites in southeastern Massachusetts. Dispersal of headstarted cooters has been confirmed through observations of known headstarted cooters in ponds to which they were not released. The first wild nesting of a headstarted female was documented in 2000. From 2013 to 2016, MassWildlife and UMass Amherst partnered to study the effectiveness of the headstart program. The study found that annual survivorship rates appear to exceed 95% in many ponds and that reproduction and recruitment in headstarted populations is widespread, but locally variable. 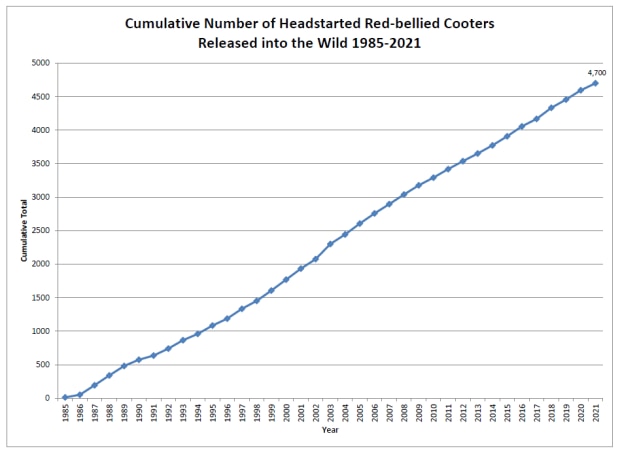