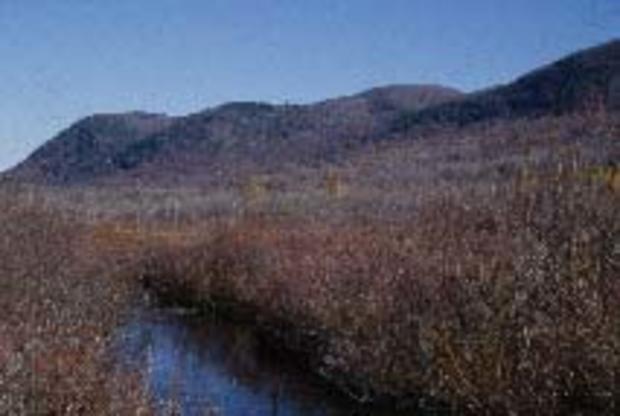 The Schenob Brook Drainage Basin ACEC, with its associated wetlands, comprises one of the most significant natural communities in Massachusetts. The largest continuous calcareous seepage swamp and the finest examples of calcareous fens in southern New England are located here. Over 40 state-listed rare and endangered species are located in the ACEC.

The ACEC is located in the southern Berkshire mountains, at the Massachusetts-Connecticut boundary. Schenob Brook flows into Hubbard Brook, which in turn flows into the Housatonic River located east of the ACEC. The watershed area includes the eastern slopes of Mounts Frissel, Ashley, Race, Everett, and Undine in the town of Mount Washington.

The unique wetlands include New Guinea Swamp, Willard Brook Swamp, Barnum Street Swamp, and the Schenob Brook fen and swamp. Approximately 2250 acres of the ACEC are wetlands. Several brooks cascade down the deep ravines and rocky gulches of the mountain slopes to the valley below. The Appalachian Trail traverses the western portion of the ACEC and provides panoramic views of some of the most scenic landscapes in Massachusetts. Portions of the Mount Everett State Reservation and Mount Washington State Forest are located within the ACEC.

Other important resources located in the ACEC include prime agricultural lands, with many small farms producing hay, corn, and livestock, and commercial tree farms, orchards, and woodlands; groundwater and springs, which supply local drinking water; extensive floodplains, which provide important flood storage and control; fishery habitat, with over twenty documented fish species; and historic and archaeological resources, which date back 10,000 years and include vintage colonial architecture.