Find links to information on how this model was applied by the Massachusetts Office of Coastal Zone Management (CZM). 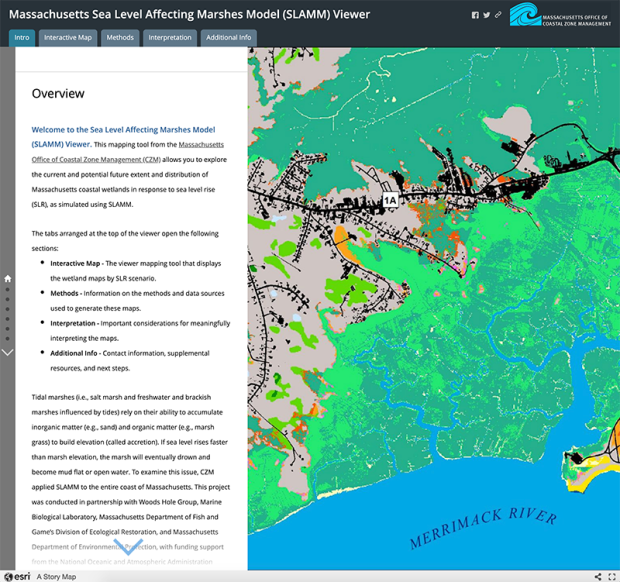 Tidal marshes (i.e., salt marsh and freshwater and brackish marshes influenced by tides) rely on their ability to accumulate sediment and organic matter to build elevation. If sea level rises faster than a marsh can build elevation, it will eventually drown, becoming mud flat or open water. To examine this issue, CZM—in partnership with the Woods Hole Group, Marine Biological Laboratory, Massachusetts Department of Fish and Game’s Division of Ecological Restoration, and Massachusetts Department of Environmental Protection—applied the Sea Level Affecting Marshes Model (or SLAMM) for the entire coast of Massachusetts. Funding support for this project was provided by the U.S. Environmental Protection Agency (EPA) and the National Oceanic and Atmospheric Administration (NOAA).

Massachusetts Sea Level Affecting Marshes Model (SLAMM) Viewer is an interactive, web-based mapping tool developed to explore the potential areal extent and distribution of coastal wetlands in Massachusetts as they respond to four different sea level rise scenarios over time. The viewer also provides an overview of the methods and data sources used to run SLAMM, along with important considerations for interpreting the map data.

Modeling the Effects of Sea Level Rise on Coastal Wetlands (PDF, 20 MB) is a report that details the SLAMM modeling approach, identifies data gaps and limitations, summarizes results at multiple scales, and provides recommendations for improved simulations. The report was prepared for CZM in 2016 by Woods Hole Group with technical support from CZM, Marine Biological Laboratory, and other partners.

CZM is in the process of identifying and characterizing marsh migration corridors throughout Massachusetts. These corridors are typically areas adjacent to salt marsh (either dry land or wetlands other than salt marsh) that have the potential to convert to salt marsh as sea level rises.

For other sources of information on SLAMM and the impacts of sea level rise on tidal marshes, see: