The following section describes how the Commonwealth will use the new technology of Energy Storage and summarizes the target for 1000 MegaWatt hours (MWh) of Energy Storage in Mass. by 2025.
Skip table of contents

The Baker Administration launched the Energy Storage Initiative in May 2015, with the goal of advancing the energy storage segment of the Massachusetts clean energy industry by:

The ESI includes a study, demonstration projects, inclusion in broader policy and programs, and a procurement target for electric distribution companies.

The Act requires each electric distribution company annually report energy storage installations in their territory no later than February 15. 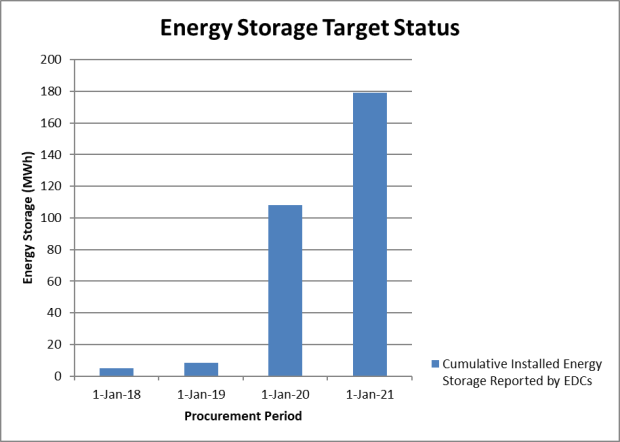 On February 15, 2021, EDCs reported 179 MWh of installed energy storage with an additional 874 MWh of storage in the pipeline.

On May 30th, the DOER held a stakeholder event in order to facilitate discussion on the potential inclusion of energy storage technologies in the Commonwealth's Alternative Energy Portfolio Standard (APS) and additional potential energy storage incentives. The event included four panels comprised of various industry representatives and moderated by DOER. Slides from the event can be found below.

Following the stakeholder sessions, the Act authorized DOER to establish a Clean Peak Energy Standard (CPS).  DOER determined the CPS is the appropriate portfolio standard to include energy storage and did not pursue broadening energy storage inclusion in the APS.

Introduction and Panel 1:Storage Applications and Use Cases: Benefits, Reasoning, Considerations to support via Portfolio Standard

Panel 2: Considerations for Storage in the APS and Current Market Perspectives

Panel 3: Considerations for a Clean Peak Standard or New Portfolio