This section describes the makeup and responsibilities of the Massachusetts Emergency Management Agency.
Skip table of contents

The Massachusetts Emergency Management Agency (MEMA) was established under the Massachusetts Civil Defense Act, Chapter 639 of the Acts of 1950. Section 18 of Chapter 6A of the Massachusetts General Laws placed MEMA within the Executive Office of Public Safety and Security. According to its website, MEMA “is the state agency charged with ensuring the state is prepared to withstand, respond to, and recover from all types of emergencies and disasters.”

MEMA’s operations are funded through a state appropriation that is supplemented by grants from the Federal Emergency Management Agency.

MEMA’s director is appointed by the Governor. During our audit period, MEMA had approximately 80 full-time-equivalent employees and 12 to 15 contract employees who provided training to local stakeholders as needed. To facilitate emergency response, MEMA has developed four regions across the state to encompass all cities/towns in the Commonwealth, as indicated in the map below. MEMA’s Region 1 office is in Tewksbury, its Region 2 office is in Bridgewater, and its Region 3 and Region 4 offices are in Agawam. 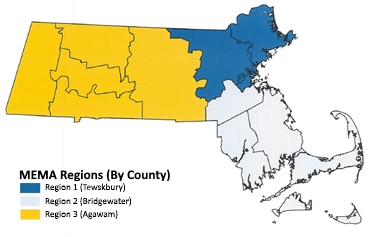 According to a fact sheet titled “The Emergency Planning and Community Right-to-Know Act” from the United States Environmental Protection Agency (EPA), in 1986, because of escalating concerns regarding “local preparedness for chemical emergencies and the availability of information on hazardous chemicals” in facilities throughout the United States, EPA worked with Congress to enact the Emergency Planning and Community Right-to-Know Act (EPCRA). EPCRA was created to help state and local communities and Native American populations plan for chemical emergencies. It also requires businesses to periodically report to the federal, state, and local governments information on their storage and use of hazardous substances, which these governments are supposed to use to protect their communities from potential chemical hazards.

According to EPA’s fact sheet “How to Better Prepare Your Community for a Chemical Emergency—A Guide for State, Tribal and Local Agencies,”

The purpose of EPCRA is to:

Chapter 116(11001) of Title 42 of the United States Code (USC) requires the governor of each state to appoint a state emergency response commission (SERC). The SERC is responsible for implementing EPCRA within the state. This responsibility includes the following:

On May 27, 1987, the Governor issued Executive Order (EO) 276, designating the Massachusetts Civil Defense Agency and Office of Emergency Preparedness as the lead agency for emergency notification, planning, and training. EO 276 was revoked on January 23, 1996 by EO 383. On May 3, 1996, the Governor designated MEMA as the SERC in Massachusetts in a memorandum:

MEMA has established a 26-member commission (called the Massachusetts State Emergency Response Commission) to facilitate EPCRA compliance. The members are the MEMA director, who serves as chair; 1 nominated member from each of eight Massachusetts agencies (the Fire Chiefs Association, Department of Fire Services, Department of Environmental Protection, Department of Public Health, Association of Hazardous Materials Technicians, Department of Transportation, State Police, and Chiefs of Police Association); 1 nominated member from an environmental organization; 5 voting members appointed by the chair; and 11 nonvoting members appointed by the chair.

According to the commission’s bylaws, its duties include the following:

As noted earlier, the designated state SERC is responsible for establishing emergency planning committees (EPCs) and appointing members to each EPC. However, in Massachusetts, each city or town chooses either to establish an EPC as a single community, in which case the EPC is designated by MEMA as an LEPC, or to establish one as part of a group of communities, in which case the EPC is designated as a regional emergency planning committee (REPC). As of the end of our audit period, of the 351 cities and towns in the Commonwealth, 294 had voluntarily organized into 70 LEPCs and 24 REPCs (Appendix), and 57 were not associated with LEPCs or REPCs (Finding 1a).

In 1997, the 26-member commission initiated a voluntary Emergency Planning Committee Certification Program. According to the program’s application form, the program created a process for LEPCs and REPCs to “ensure all EPCs are moving towards meeting the goals and missions of EPCRA.” Certification is also used to establish eligibility for LEPCs and REPCs to receive federal hazardous material emergency planning grant funds that are distributed by MEMA. As of October 2018, there were 49 LEPCs and 15 REPCs participating in the certification program. According to MEMA, of these participants, 31 LEPCs and 11 REPCs had achieved EPCRA compliance.

Tier II or “Community Right to Know” reporting is a requirement, set forth in 42 USC 116(11022), that businesses give information to government agencies and the public about what hazardous materials1 are used or stored at the businesses’ facilities. Any facility that has certain hazardous materials above a threshold established by EPA at any time during the calendar year is required to submit a Tier II report, by March 1 of the next calendar year, to the SERC, the LEPC or REPC, and the local fire department. Information in Tier II reports includes the type of hazardous material, the state it is in (solid, liquid, or gas), the quantity stored, its location at the facility, and contact information for the facility’s designated emergency point of contact. The intent of this reporting requirement is to provide the community with information on what chemicals are present. Tier II reporting also provides government agencies with information about facilities so emergency personnel can respond and make informed decisions. Tier II reporting is a federal obligation imposed by EPA, but reporting is done at the state and local levels.

1.    The Environmental Protection Agency defines hazardous materials as substances that may present physical hazards. Information and procedures for handling and working with hazardous materials are maintained on detailed information sheets called Material Safety Data Sheets. Chemical manufacturers provide these sheets to purchasers of hazardous chemicals. More than 500,000 products have such sheets.