Find information on the Quabbin Park Cemetery, including a guided tour.

Click here for a guided tour of the Quabbin Cemetery, an interactive program that provides a history of the cemetery and the Swift River Valley along with details at 27 individual places within the cemetery. 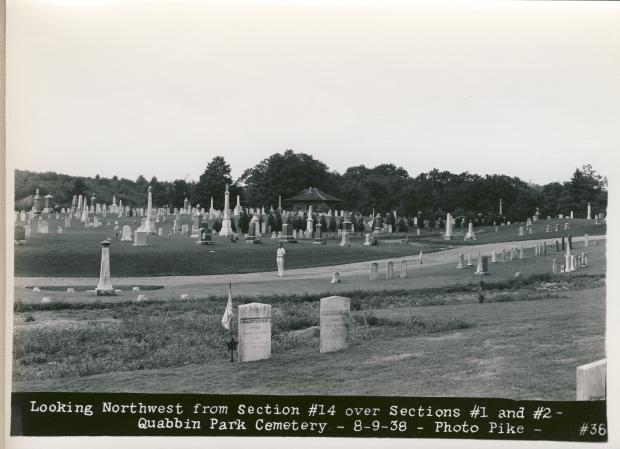 The Quabbin Park Cemetery (QPC) was built as part of the Quabbin Reservoir project.  It was developed between 1931 and 1932 by the Metropolitan District Water Supply Commission (MDWSC) to receive the remains of 6,601 graves removed from the Swift River Valley.

Altogether, 7,613 graves were moved from 34 cemeteries scattered throughout eight towns.  A majority of these were moved to the QPC, while some graves were relocated to cemeteries in other towns by choice of families.  This site was developed on 82 acres of former farmland and woodland south of Route 9 in Ware on land outside of the Quabbin Reservoir watershed.  Descendants are able to access their ancestors’ gravesites at this site which is easily reached and is outside of the flooded valley.

Prior to moving any graves, the MDWSC  plotted and mapped all the known cemeteries on the 81,000 acres of land bought for the project. Photographs were taken of every gravestone and all data was recorded.   Families with recorded deeds were contacted and asked where they wanted to have their ancestors’ remains reburied.  If the family chose Quabbin Park Cemetery the bodies were reburied by the MDWSC in new lots in the same position as their original lot layout. Residents were not charged for reburial at the new cemetery.  If they chose to have family members reburied at other cemeteries, they were not charged for the transport, although they would have had to purchase burial lots there.  Additionally, if a family owned unused burial lots at the former cemeteries they were entitled to lots in the new cemetery.

Along with graves, the MDWSC moved War Memorials and markers from the former Swift River valley towns of Dana, Enfield, Greenwich, and Prescott to the QPC.  These monuments greet visitors as they enter the cemetery grounds.  They have come to memorialize the four towns themselves and are an integral part of the Memorial Day Services at Quabbin Park Cemetery, held the Sunday before the observed Memorial Day holiday.  In addition to honoring Veterans and those who lost their lives in service to our country, the ceremony also recognizes the sacrifices made by former residents of the Swift River Valley so that the Quabbin Reservoir could be built.

The entrance to Quabbin Park Cemetery on Route 9 is marked by two stone columns that include stones from the foundation of every church in the valley.  Bronze plaques were also placed on these columns, listing the name of every cemetery removed for the reservoir project.

It is still an active cemetery, however purchase of burial lots is restricted to former residents of the four towns, their direct descendants, or employees and former employees of DCR.

Vital records for the four disincorporated towns are housed at the DCR Quabbin Administration Building in Belchertown.  Additional information about the Quabbin Park Cemetery and the location of gravesites is available to the public on request through the Quabbin Visitor Center.  The Center is located within the Administration Building which can be accessed through the Main (or West) Entrance, three miles west on Route 9 from the Quabbin Park Cemetery.

The Quabbin Visitor Center has developed an on-line guided tour of Quabbin Cemetery.  This interactive program provides a history of the cemetery and the Swift River Valley along with details at 27 individual places within the cemetery.

There are also instructions on how to use an app on your cell phone to use while visiting the cemetery.

Click here for a guided tour of the Quabbin Cemetery. 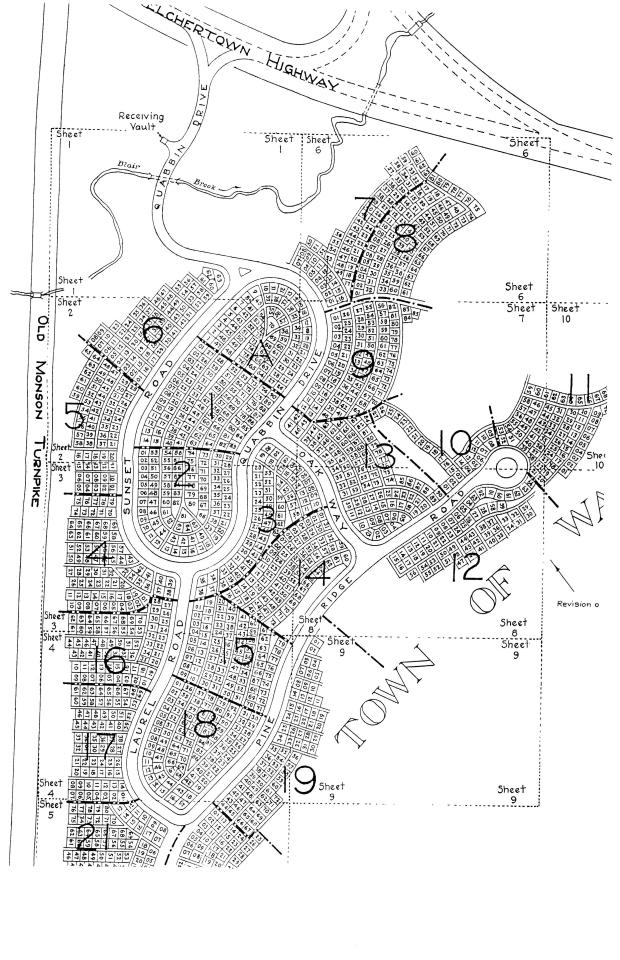 In this app, you can: 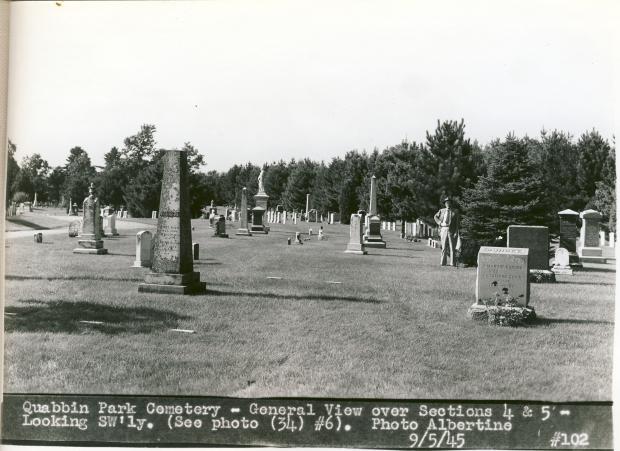 Please be respectful of this cemetery and the gravesites within its boundaries.

The following are prohibited except by prior written approval of the DCR Quabbin Regional Director: 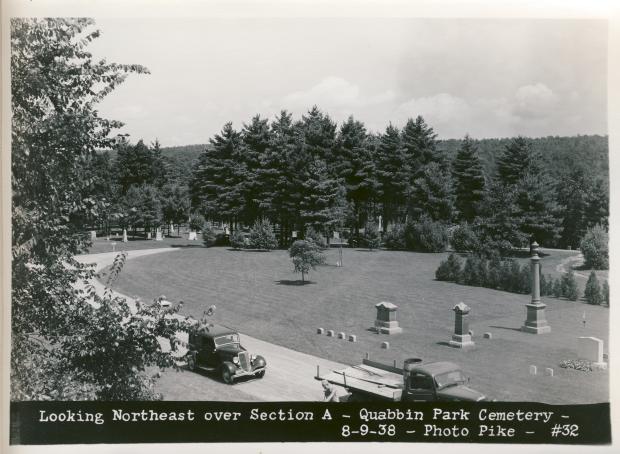 The Massachusetts Department of Conservation and Recreation's Archives and the Massachusetts Water Resources Authority Library,  in cooperation with the Massachusetts State Archives, and DCR's Office of Watershed Management, have worked with the Boston Public Library to make thousands of historic photographs from the construction of the water supply system available online.

The Quabbin Park Cemetery is on Rt. 9 in the town of Ware. 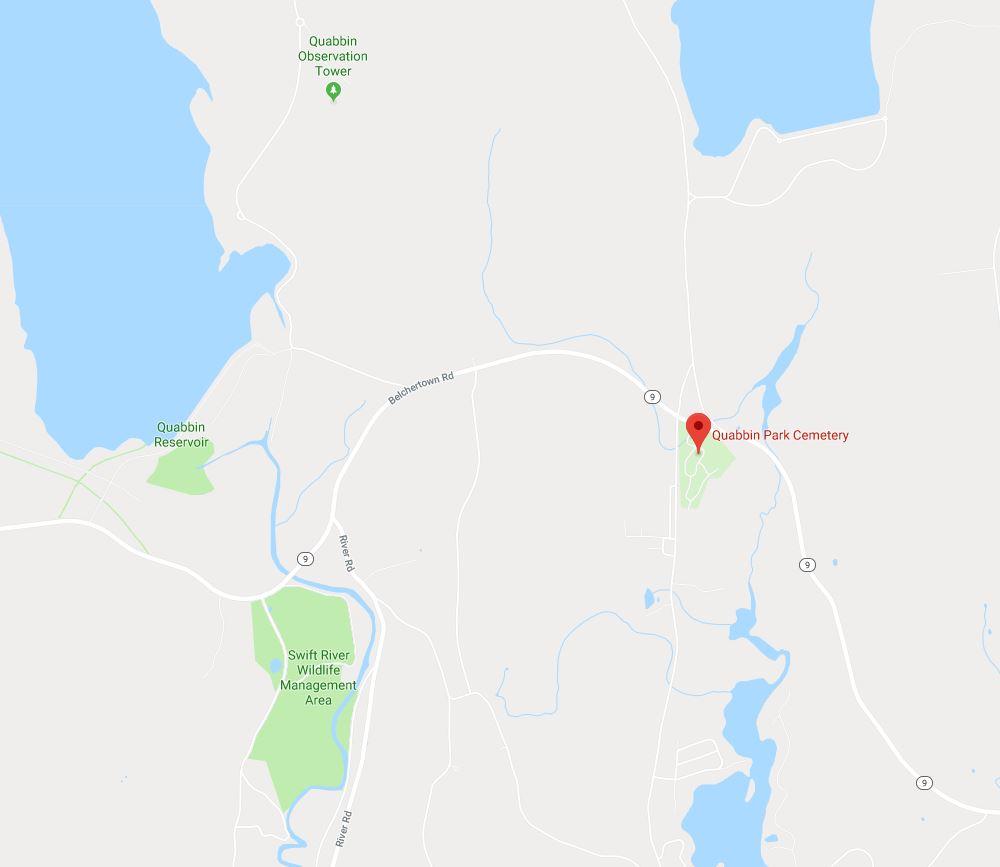