Beavers play an important role in New England's ecology. Learn about beavers, their ability to transform the landscape, and how to deal with beaver problems. 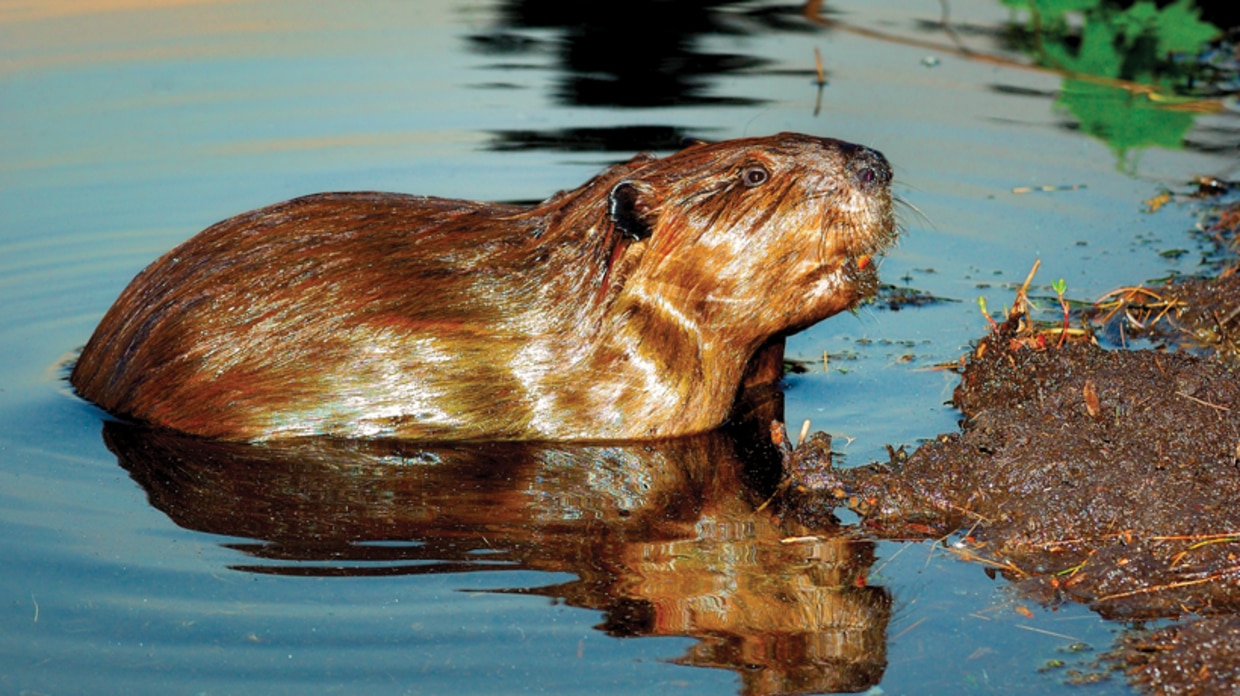 Beavers are common and abundant throughout most of Massachusetts. They are becoming increasingly common in southeastern Massachusetts, but are still absent from Cape Cod and the islands. Since European settlement, more than half of the wetlands in the lower 48 states have been lost. By damming streams and forming shallow ponds, beavers create wetlands. These wetlands provide habitat for a tremendous diversity of plants, invertebrates, and wildlife. People benefit too. Wetlands control downstream flooding by storing and slowly releasing floodwater. They also improve water quality by removing or transforming excess nutrients, trapping silt, binding and removing toxic chemicals, and filtering out sediment.

Beavers are North America’s largest native rodents, weighing between 35 and 80 pounds as adults. They can be 2–3 feet in length, with an additional 10–18 inches for the tail. Males and females are similar in size. Beavers have dark brown to reddish brown fur. Large, webbed hind feet and a flat, wide leathery tail help them to move swiftly in water. An animal often mistaken for the beaver is the much smaller muskrat, which is another aquatic rodent. However, muskrats weigh only 2–3 pounds and have a narrow, rat-like tail.

Adult beavers have few predators and may live up to 20 years or more. They stay with the same mate for life and breed during winter (January through March). The females give birth to 1–9 kits inside a lodge between April and June. These kits stay with their parents through two winters before dispersing the following spring. A single family unit is called a colony, and is typically made up of 6–8 individuals; two adults, that year’s kits, and the young from the previous year.

Beavers are strict vegetarians. They feed on a variety of aquatic plants (especially water lilies) and the shoots, twigs, leaves, roots, and bark of woody plants. The bark, particularly the inner bark of trees and shrubs, are important foods, especially in winter. Aspen, birch, alder, and willow are particularly favored foods. Beavers favor habitat containing shrubs and softwood trees, flat terrain, and perennial streams that can be dammed to create ponds. They are unique among wild mammals in that they alter their habitat to meet their needs. They do this primarily by damming up small rivers and streams to form ponds.

There are five main options for resolving conflicts with beavers.

People who learn to tolerate a certain amount of beaver influence on their land generally find that co-existing with beavers provides far more benefits than perceived harm. Beaver create excellent wetland habitats that benefit a huge diversity of plant and animal life.

Fencing can provide a long-term solution, while preserving the beneficial aspects of beavers. The most effective way to protect specific trees and shrubs is to construct exclosures around them. These exclosures should be constructed of heavy-gauge fencing, be a minimum of 4 feet tall, and be flush with the ground. To protect larger areas, such as orchards or nurseries, standard fencing is usually sufficient since beavers are poor climbers, rarely burrow under fences, and generally don’t chew fencing unless it is wrapped tightly around trees or shrubs.

Breaching and removing the dam*

Dam breaching is an immediate, but short-term solution to flooding problems caused by beaver. If beaver remain at a site during a dam breach, they will be cued by the sound of escaping water, and will usually rebuild the damaged dam quickly, sometimes overnight.

Sometime referred to as “beaver pipes,” WLCDs can regulate water at desirable levels behind dams. By successfully installing an effective WLCD, the life of a beaver wetland, and its associated benefits, can be prolonged. WLCDs require regular maintenance and may not be effective in all situations.

Beavers are an important natural resource in Massachusetts. They are classified as a furbearer species, for which a regulated trapping season and management program have been established. Removal of problem beavers can be a quick way to alleviate beaver problems when done by an experienced trapper. Beavers can be trapped during the open season (November 1 – April 15) by a licensed trapper using permissible traps (i.e. box or cage-type traps). By removing beaver during the regulated trapping season they can be used as a natural resource. An Emergency Permit is needed to trap beavers with restricted traps (i.e. body-gripping traps, “Conibear” traps) and to trap beaver outside the regulated trapping season. It is against state law to capture and release beaver into another area.

*These options require permits or a trapping license. Learn more about how to get the right permits by reading  A Citizen’s Guide to Addressing Beaver Conflicts.

If you are experiencing problems with beavers or have questions, contact your nearest Masswildlife office.