Black bears continue to expand their range in Massachusetts. Learn about the lives and habits of these fascinating animals and get tips for avoiding conflicts with bears in your area. 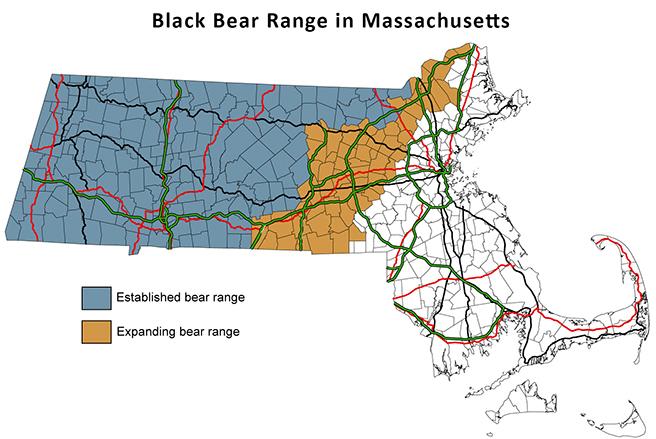 Though Massachusetts is the third most densely-populated state in the country, black bears have been increasing in numbers and distribution since the 1970s. The statewide population of bears is estimated to be over 4,500 animals and is growing and expanding eastward. Black bears live and breed in Worcester County, northern Middlesex County, and west to the Berkshires. Bears, mostly young males and some breeding females, are living in other eastern Massachusetts communities along Route 495. Dispersing young bears and wandering males often find themselves east of Route 495.

Black bears are black overall with a brown muzzle and sometimes a white chest patch. Their feet are large and well-padded, with moderate-sized, curved claws. Male black bears generally range in weight from 130 to 600 pounds and females from 100 to 400 pounds.

Black bears have good eyesight and hearing. Their extraordinary sense of smell is used both to locate food and recognize potential danger. They are excellent climbers and use trees to rest, escape threats, and protect their young. Black bears mate between mid-June and mid-July. Depending on food availability and snow cover, bears will den between mid-November and early December and exit between early March and mid-April. Bears commonly den in brush piles, under fallen trees or jumbles of rocks, or in mountain laurel thickets. A litter of usually two or three cubs is born in the den in mid-to-late January and they remain with the sow (adult female) for about 17 months.

Bears are omnivores, meaning they eat both vegetation and meat. In spring, bears feed on lush, green emerging plants and are often seen in wetlands. In summer, they take advantage of ripening berries and can often be found in thick regenerating forest stands where berries are often found. Ripened corn and stands of oak, beech, and hickory trees are favored foods in the fall. Bears also feed on grubs and insects, dead animals, and occasionally young deer. Bears will visit birdfeeders, orchards, and beehives. It is not unusual for bears to use residential areas, and they are often attracted to yards by bird feeders and unsecured trash. Bears have excellent long-term memory and can remember the location of food sources years after the first visit. Black bears are important and valuable mammals in Massachusetts. They are big game mammals for which regulated hunting seasons and a management program have been established.

Bears that have been habituated (accustomed) and dependent on human-associated foods, such as bird seed, trash, and pet food, are likely to cause damage and become a nuisance. Removal of food sources and other attractants is key to preventing problems with bears.

If you live in an area with bears, it is best to not set out bird feeders. In general, most bears are denned from mid-December through February. If you choose to put out bird feeders, doing so during this time may decrease the chance of a bear coming to your feeder. In mild winters, some bears may be active year-round. Bring in any feeders at the first sign of bear activity.

Put trash barrels out the morning of trash pickup, not the previous evening. Store all garbage in closed containers in a garage or outbuilding. Using double bags or sprinkling with ammonia will help reduce odors. If you compost, do not throw meat scraps, greasy, oily, or sweet materials in your compost pile. Businesses and campgrounds in bear country should invest in bear-proof dumpsters with a locking lid. Trash should always be placed inside the dumpster, and never left accessible to bears.

Always feed pets indoors. Clean greasy barbecues and grills after each use. Do not leave food scraps, grease containers, or spilled grease in your yard. PROTECT BEES AND CHICKENS: Use electric fencing to safeguard hives and coops. Electric fences are most effective when put up and continuously charged before the first damage occurs. Keep open, mowed areas on all sides of hives and coops and do not locate hives or coops in abandoned areas or close to brushy, overgrown areas.

If you see a bear in your neighborhood

A bear’s first response to something unusual is to leave. If a bear is feeding in an area where it doesn’t belong, such as your yard, on a porch, or in a dumpster, step outside, yell, and make lots of noise. The bear will usually leave—accompanied by its young. Habituated bears may ignore minor harassment. If you continue to see bears, check your property and remove any potential food sources.

Black bears are usually wary of people. Normal trail noise will alert bears to your presence and they will often disappear before you see them. If you see a bear, it may not immediately recognize you as a human and may be curious until it scents you. Make the animal aware of your presence by clapping, talking, or making other sounds while slowly backing away. Do not approach bears or intrude between a female bear and her cubs. Keep dogs leashed and stay a respectful distance away.

If you are experiencing problems with black bears or have questions, contact your nearest Masswildlife office.