Bobcats can live in a variety of habitats, including residential areas. Learn about these beautiful and elusive predators and get tips if you are having problems with bobcats in your neighborhood. 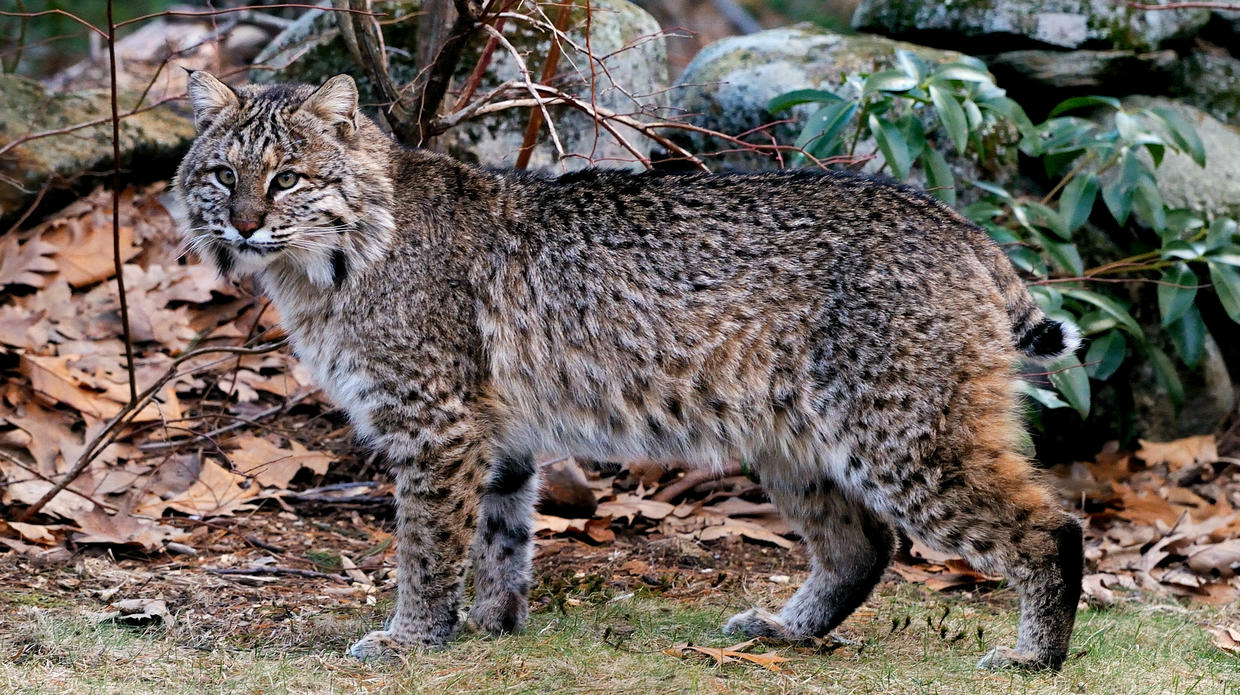 The bobcat is the only wild cat now found in Massachusetts. Bobcats are common in the central and western parts of the state, present in the northeast, and expanding into the southeast.

The bobcat is a medium-sized feline, approximately twice the size of a domestic house cat. It can be easily identified by its short, “bobbed” tail (up to 12 inches), prominent face ruff, and slightly tufted ears. Its coat of short, dense fur can vary from a yellowish to reddish brown with distinct or faint black spots along its flanks and white underparts that are also spotted with black. In summer, the fur tends to be shorter and more reddish in color, becoming longer and much paler in the winter, although there can be much variation in color among individuals. Adult bobcats weigh 15–35 pounds and measure 28–47 inches in length. Size varies depending on sex, as male bobcats are approximately 33% larger than their female counterparts .

Bobcats breed from February through March. They are polygamous and do not form lasting pair bonds. The young are born after a 62-day gestation period in April or May. Females produce one litter each year consisting of 1–4 kittens, with an average litter size of 2. The female is the exclusive provider and the male does not participate in raising the young. At birth, the kittens are blind and helpless but have a thick coat of spotted fur. The kittens are born in a den lined with dried grass, leaves, moss, and other soft vegetation that the female scrapes into the den. Dens are located in rock crevices, under rocky ledges, in caves, in brush piles, or in hollow trees, stumps, or logs. Females may use the same den sites for several years in a row. The female nurses the kittens until they reach two months of age. At one month of age, the young begin taking solid food and venturing from the den. The young remain with the adult female until they are full grown, usually through their first fall or winter. Females reach sexual maturity at one year of age, although they do not typically produce their first litter until two years of age. Males do not reach sexual maturity until two years of age. Bobcats live an average of twelve years in the wild and females continue to produce one litter per year until death. Although some young fall prey to owls, coyotes, and adult male bobcats, food abundance is the primary factor affecting the survival of both kittens and juvenile bobcats. Bobcats are an important natural resource in Massachusetts. They are classified as a furbearer species, for which a management program and regulated hunting and trapping seasons have been established.

As carnivores, bobcats most commonly prey on medium-sized animals such as rabbits and hares but will eat mice, squirrels, skunks, opossums, muskrats, birds, and snakes. Occasionally bobcats will prey on larger animals such as deer but this is generally when other food items are scarce. Only sick, injured, young or very old large animals are likely to be killed. Bobcats hunt by stalking prey until they are close enough to pounce. They may also wait on a trail or in a tree to ambush prey or run down prey over short distances. Although bobcats have a fairly good sense of smell, they rely primarily on their keen eyesight and hearing to detect both prey and danger. When food is plentiful, they will cache the excess by covering it with leaves, grass, or snow and return to feed on it repeatedly. Bobcats are shy, solitary, and generally elusive. While usually silent, bobcats can produce a large repertoire of noises. A bobcat may scowl, snarl, and spit when confronted with danger and may be heard screaming during the breeding season. Bobcats maintain well-defined home ranges that vary in size depending on prey abundance, season, and climate. Males maintain larger home ranges than females and individuals can travel up to four miles daily. Both sexes use scent marking to mark trails and den sites. Their use of scent is thought to help individuals avoid direct contact with each other as they travel within their home ranges. Bobcats can be active day or night but tend to exhibit crepuscular (dawn and dusk) activity. Their activity peaks three hours before sunset until midnight and again between one hour before and four hours after sunrise. They remain active year round and do not hibernate. Bobcats are proficient climbers and will climb trees to rest, chase prey, or escape from predators (chiefly domestic dogs). Like domestic cats, bobcats try to avoid water whenever possible but when forced to flee to water, they can swim quite well.

Bobcats are well-adapted to a variety of habitats, such as mountainous areas with rocky ledges, hardwood forests, swamps, bogs, and brushy areas near fields. Bobcats deal with human influences but tend to avoid areas with extensive agriculturally cleared lands that eliminate other habitat types. Bobcats are adapting to suburban settings and may be seen in backyards and residential areas. Bobcats rarely cause conflicts with human activities.

Bobcat tracks may sometimes be confused with the tracks of domestic housecats although adult bobcat prints are larger than a house cat. Bobcat tracks have four toes in the front and back although the front foot actually has five toes. The fifth toe is raised high on the forefeet so it does not leave an impression when it walks. The claws also do not leave an impression, as they are usually retracted.

Bobcats may prey on small livestock and chickens. Avoid pasturing animals or placing coops in remote areas or in areas near heavily wooded cover. Pen livestock in or near a barn at night. Keep chickens within secure pens or coops. Electric fencing may be used as a deterrent.

Bobcats are the only wild cat in Massachusetts. Learn more about mountain lions.

If you are experiencing problems with bobcats or have questions, contact your nearest Masswildlife office.