Fishers are members of the weasel family. They are shy and elusive, but can be found throughout Massachusetts. Learn about these fascinating predators and what to do if they are causing problems in your yard. 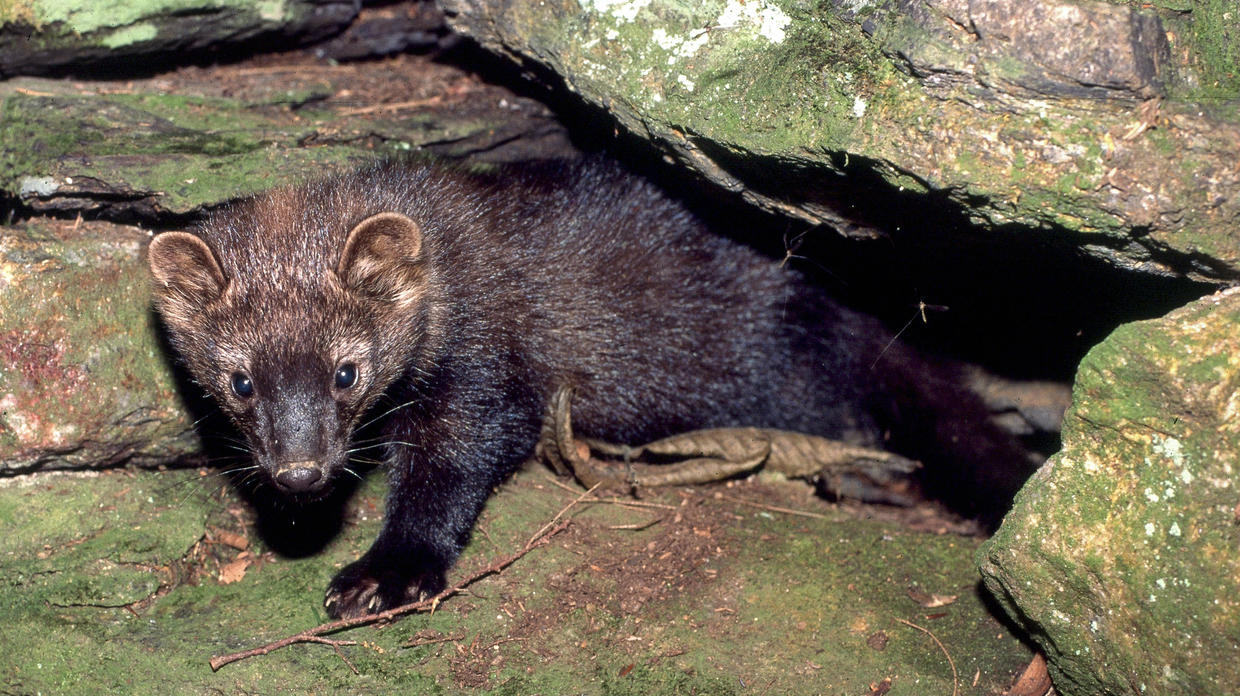 Due to its alert, secretive nature and solitary habits, most people have never seen this interesting predator. It disappeared from the state by the 19th Century due to agricultural land clearing. Fishers have since made an amazing comeback, and now live in populated areas that offer mature forest habitat and the squirrels it preys on.

The fisher is one of the largest members of the Mustelid or weasel family. Fishers exhibit sexual dimorphism, which is physical differences in body size between females and males. Adult males weigh 8 to 16 pounds and measure approximately 3 feet in length. Adult females weigh 4 to 6 pounds and measure approximately 2 feet in length. In both sexes, the tail accounts for approximately one-third of the total body length. The fisher exhibits the typical “weasel” shape with a long, slender body, short legs, and furred tail. It has a pointed face with large, rounded ears set close to the head. It is well adapted for climbing and has sharp, retractable claws similar to those of a domestic cat. Its coloration is generally a rich brown to black with grizzled grayish coloring on the head and shoulders. Females typically have the darkest fur. Individuals may have white patches of fur on their chest and lower abdomen.

Fishers breed from February to March and exhibit a reproductive strategy called “delayed implantation.” The adult female breeds within days after giving birth, but the fertilized eggs remain dormant in her uterus for the next 10 –11 months. The fertilized eggs then implant in the uterine wall and begin normal development. The young are born 1–2 months after implantation. Females produce 1 litter each year consisting of 1–4 kits, with an average litter size of 3. The young are born helpless, blind, and sparsely furred. Maternal dens, typically located in a cavity high in a large tree, are used for the first 8–10 weeks. Once the kits become mobile, they are moved from the maternal den to one on or below the ground. It is believed that the maternal den protects the helpless young from aggressive male fishers and ground predators. The female nurses the kits until they reach four months of age. By five months of age, the kits are approximately the same size as the adult female and have begun to learn how to kill their own prey. The young remain with the female until late summer or early fall, at which time they disperse to begin their solitary lives as adults. They reach sexual maturity at one year of age, and females produce their first litter at the age of two.

Fishers are shy and elusive animals that are rarely seen even in areas where they are abundant. They can be active day or night. They tend to exhibit nocturnal and crepuscular (dawn and dusk) activity in the summer and diurnal (daytime) activity in the winter. They remain active year round and do not hibernate. Their preferred habitat is mixed forest with heavy canopy cover, as they tend to avoid traveling in large open areas. They commonly use hollow logs, stonewalls, tree cavities, and brush piles to rest. Fishers are omnivorous. Their primary foods include small rodents, squirrels, rabbits, birds, eggs, fruit, porcupines, and carrion. They will also opportunistically prey on poultry and domestic cats. Although they are proficient climbers, most of their hunting takes place on the ground.

Problems with fishers may sometimes arise, but are usually restricted to predatory attacks on domestic birds, rabbits, and free ranging house cats. If you want to make your property less attractive to fishers and avoid having any problems with these predators, follow these basic practices. Remember, share these tips with your neighbors; your efforts will be futile if neighbors provide food or shelter for fishers. Fishers are an important and valuable natural resource in Massachusetts. They are classified as a furbearer species, for which a regulated trapping season and management program have been established.

If you are experiencing problems with fishers or have questions, contact your nearest MassWildlife office.

Use feeders designed to keep seed off the ground, as the seed attracts many small mammals, like squirrels, that fishers prey upon. Remove feeders if fishers are regularly seen around your yard.

Don’t hesitate to scare or threaten fishers with loud noises, bright lights, or water sprayed from a hose.

Fishers are predators that prey on medium-sized mammals and poultry. Fishers view domestic cats and rabbits as food, and will prey on them when hunting. They will also raid chicken coops and can kill numerous chickens at a time. For their safety, cats should be kept indoors at all times. Pet rabbits and poultry should be kept in tightly secured buildings or hutches that prevent access by fishers.