Opossums are marsupials found in Massachusetts. They are known for “playing possum” when threatened, falling over and pretending to be dead for up to several hours. 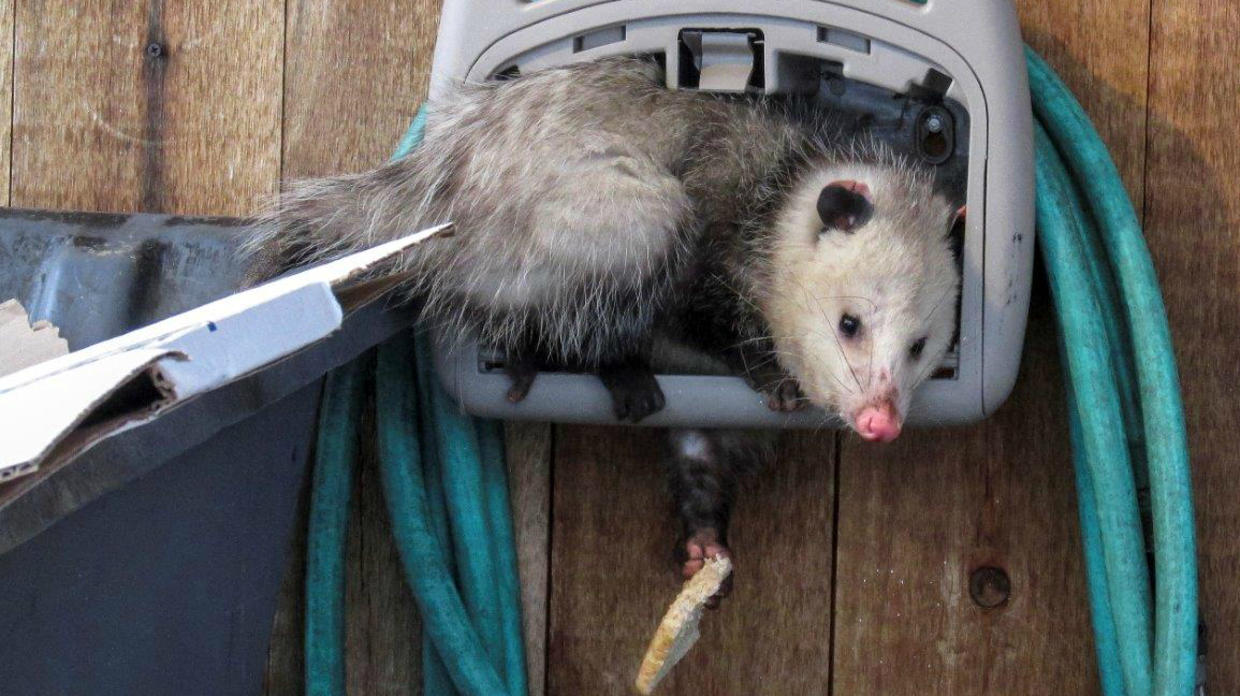 Opossums are found throughout Massachusetts, except on Martha’s Vineyard and Nantucket. They are known for “playing possum” when threatened, falling over and pretending to be dead for up to several hours.

Virginia opossums are the only marsupial found in the United States. Marsupials are mammals that use a pouch to carry their young. While "possum" is a slang term that is often used, it is technically incorrect to use in reference to the Virginia opossum; there is a distinct group of marsupials in Australia and New Zealand that are true possums.

The opossum is an agile climber and good swimmer. Adults weigh 4–11 pounds and measure approximately 2–3 feet in length, including a long hairless tail. It uses its prehensile (grasping) tail to stabilize itself as it walks along tree branches. The hind feet have an opposable big toe that functions much like a human thumb. Opossums are an overall grizzled white color with a pink nose, large black hairless ears with pink tips, and short dark legs. They have 50 teeth, more than any other land mammal on this continent, which they may bare when threatened. Opossums have the smallest brain to weight ratio of any North American mammal; regardless, they are an incredibly adaptable species that has been able to thrive in North America.

Opossums are solitary animals except when coming together to mate or when females have young. Opossums breed from January to July. After about 2 weeks, they give birth to a litter of 1–13 kits. Kits are born blind and hairless without well-developed rear limbs. Immediately after birth, young crawl into their mother’s pouch and nurse for 8 weeks. Young will then ride on their mother’s back for 4 weeks and will become fully independent at 12 weeks. Opossums become sexually mature at 8–12 months of age and typically have 1 litter per year.

Opossums can be found in open woods and farmlands next to water, as well as suburban and urban areas. They are mostly nocturnal but are sometimes seen in daylight, especially when food is scarce. Opossums are nomadic and tend to not den in the same area for consecutive nights. They den in abandoned burrows, tree cavities, hollow logs, and brush piles.They remain active year round and do not hibernate. Massachusetts is near the northern end of the opossum’s geographic range and as a result they can have difficulty dealing with the cold temperatures experienced here. For this reason, opossums often use homes, sheds, garages, and other buildings as refuges from the cold. It is also not uncommon to see the signs of frostbite on an opossum’s furless ears, nose, and tail.

Their primary foods include eggs, grains, nuts, fruit, birds, snakes, frogs, mice, and carrion (dead animals). Opossums will also take advantage of human associated foods, such as garbage, pet food, bird seed, corn, and poultry. Because they eat many road-killed animals, they often become road kill themselves. Opossums are also preyed upon by owls, raptors, bobcats, coyotes, and unsupervised dogs. When opossums are threatened, they will growl, hiss, and bare their teeth or climb a nearby tree to escape. If they are unable to escape, the opossum will play dead for several minutes to several hours until it believes the danger has passed.

While opossums may look strange or scary to some people, opossums are harmless and very rarely present any threat to human health and safety. It is extremely rare for opossums to contract rabies; it is thought that their low body temperature presents an inhospitable environment in which the virus cannot thrive.

If you want to make your property less attractive to opossums, follow these basic practices. Remember, share these tips with your neighbors; your efforts will be futile if neighbors provide food or shelter for opossums. Opossums are an important and valuable natural resource in Massachusetts. They are classified as a furbearer species, for which a management program and regulated hunting and trapping seasons have been established. If you are experiencing problems with opossums or have questions, contact your nearest MassWildlife office.

Use feeders designed to keep seed off the ground. Remove feeders if opossums or other wildlife are regularly seen around your yard.

Exposed garbage and open compost piles can attract opossums to your property. Secure garbage with tight fitting lids and put garbage out the morning of pick up, instead of the night before.

Poultry should be kept in tightly secured buildings or hutches that prevent access by opossums and other wildlife. If cornered, opossums may attack dogs and cats. For the safety of your pets, keep them leashed at all times and feed pets indoors.

Opossums may use chimneys, attics, and spaces under houses, porches and sheds as denning sites. Close off these areas to prevent animals from using them. Since opossums are good climbers, remove overhanging branches near your home and cap your chimney.