Sample Landscape Plan for a Coastal Bank with an Existing Seawall

Historically, engineered structures such as seawalls and revetments were built to protect coastal banks from erosion and storm damage. However, these structures can cause serious problems along an eroding shoreline. First, they arrest the flow of sand from the bank to beaches and other properties along the shore—exacerbating erosion problems at these locations. They also deflect waves, increasing erosion in adjacent areas and ultimately undercutting the stability of the structure itself. In addition, these structures can alter groundwater flow and surface water runoff and destabilize the bank and adjacent areas. Because of these problems, the Massachusetts Wetlands Protection Act prohibits construction of most new engineered structures on coastal banks that serve as a sediment source.

For existing seawalls, revetments, and other engineered structures, plants can be used around them to help uptake water, control runoff, and buffer storm waves to prevent erosion and protect vulnerable areas. Plants will also help beautify the area, provide wildlife habitat, and filter pollutants before they reach the ocean.

Unless otherwise noted, all plants in the landscape plan, landscape profile, and plant key below are native to Massachusetts (see the definitions for native and non-native species at the bottom of this page). For more detailed descriptions of each plant, see Grasses/Perennials, Shrubs/Groundcovers, and Trees.  For more coastal landscape plans, see Coastal Bank and Coastal Dune.

Landscape Plan for Coastal Bank with an Existing Seawall 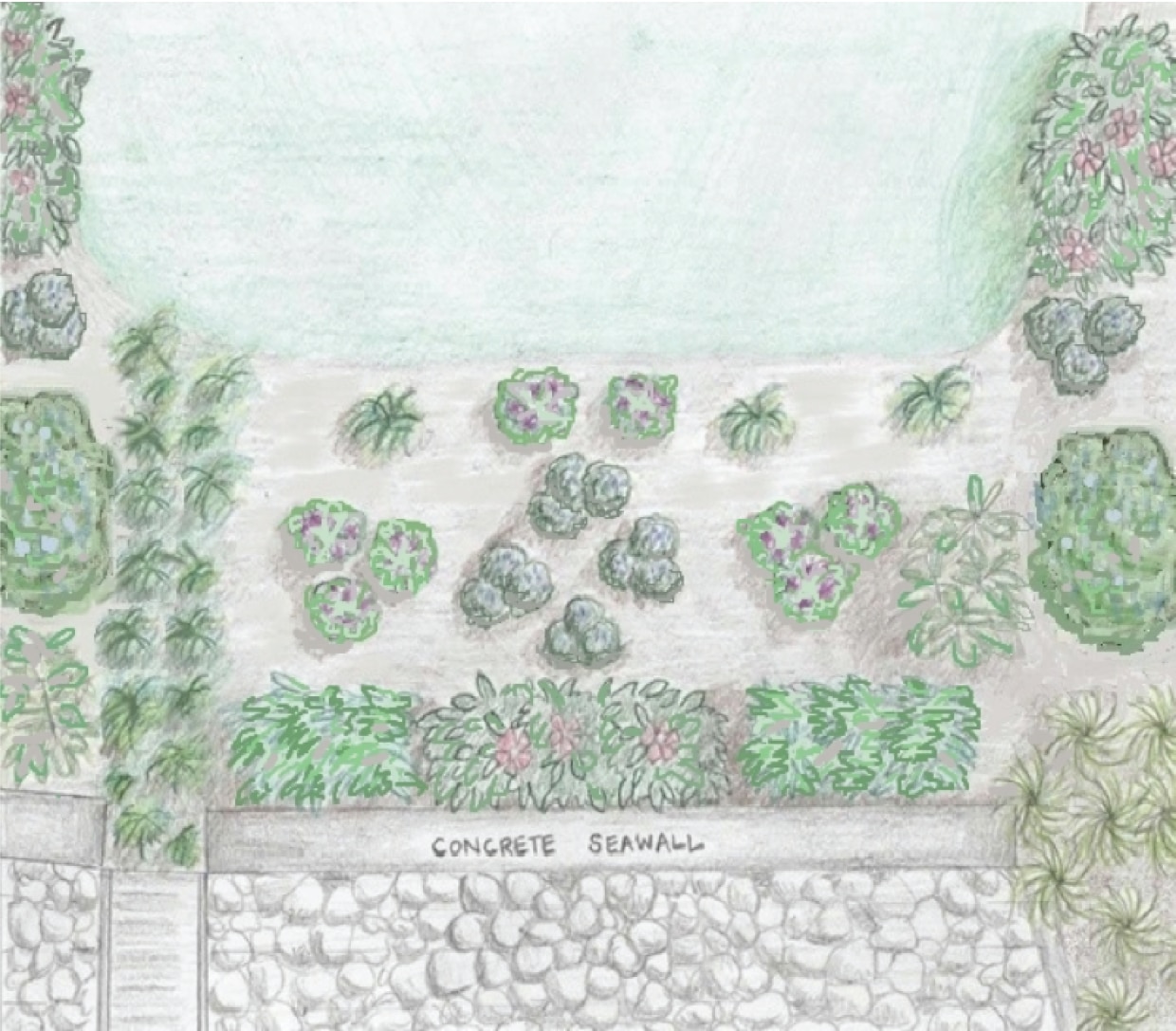 This design adds plants around an existing seawall to help capture runoff before reaching the structure, preventing erosion and sinkhole development behind the wall. A thick buffer of deep-rooting fibrous switchgrass (or other similar grass) is recommended to stabilize the sediments and prevent wave scour on the exposed bank next to the seawall.

Landscape Profile for Coastal Bank with an Existing Seawall 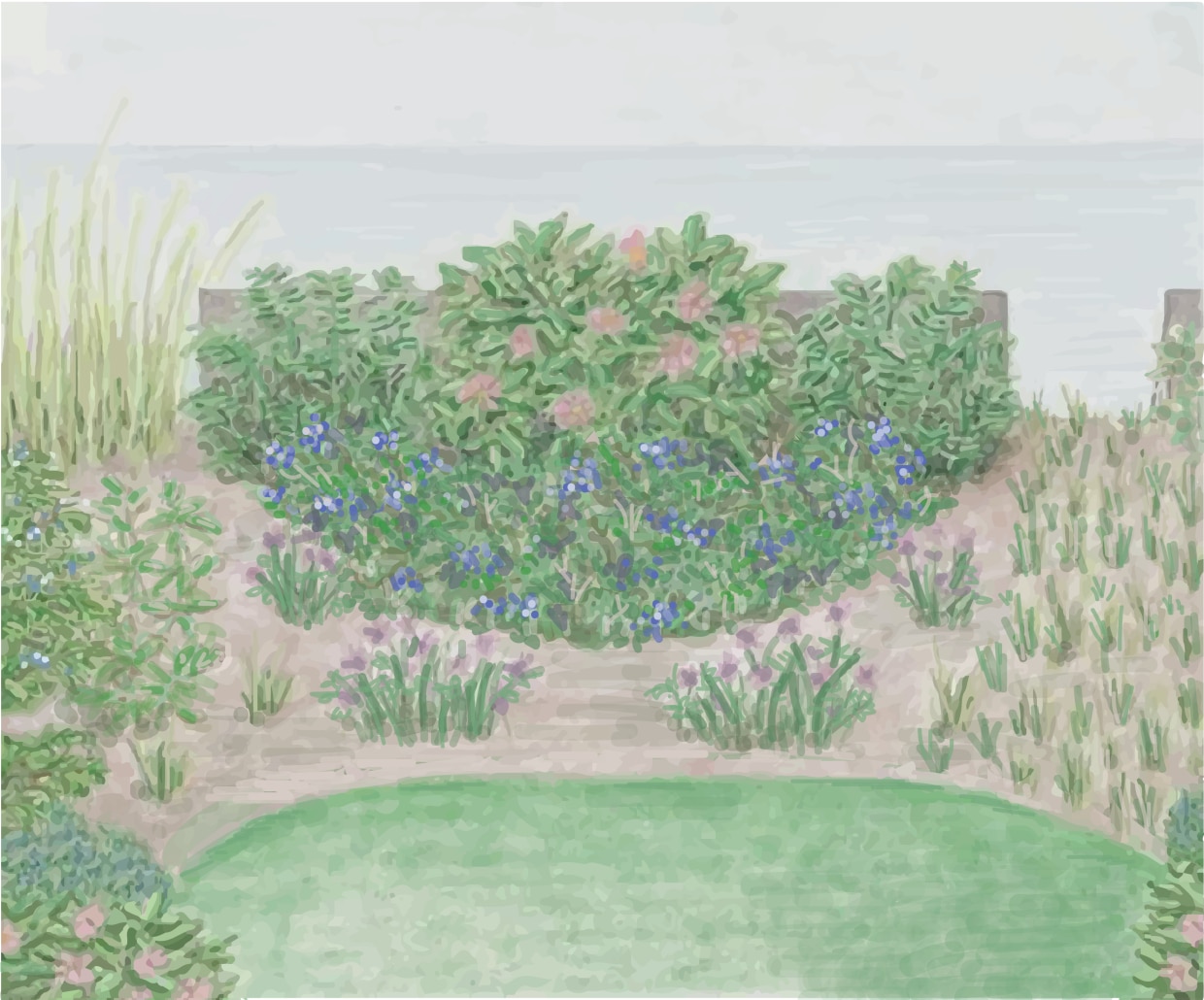 Here, a variety of native grasses, perennials, groundcovers, and shrubs will help beautify the area, provide wildlife habitat, and filter pollutants before they reach the ocean. Pennsylvania sedge is used throughout the site as a substitute for lawn grass, as a durable erosion-resistant pathway to the stairway, and for low-maintenance accents in other areas of the garden. Native shrubs and perennials are used to screen the seawall, absorb stormwater runoff, and provide berries and shelter for wildlife. 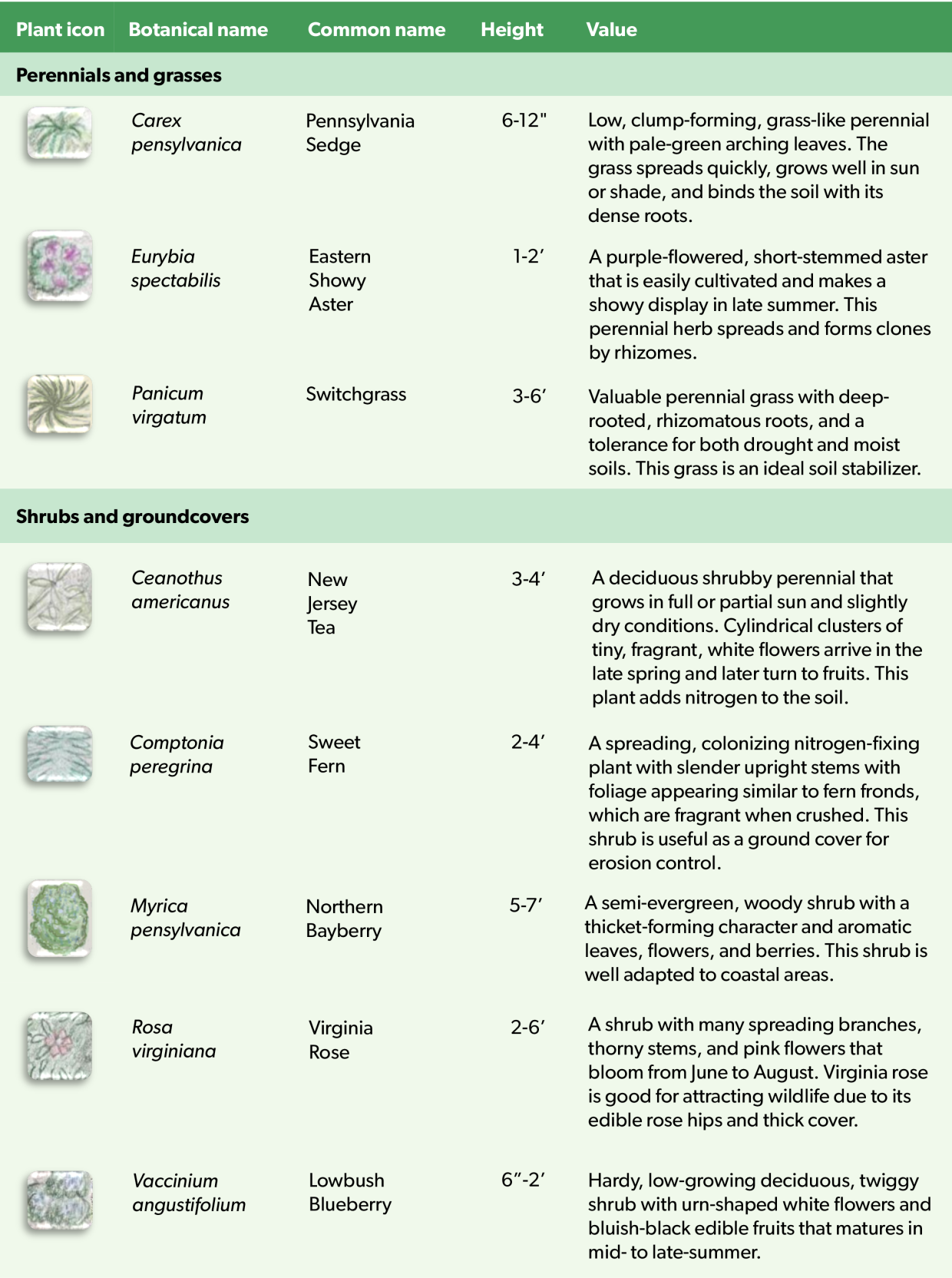