Whelk is a common name given to edible marine snails and winkles. There are two species of whelks that are commonly found in and harvested from Massachusetts waters: channeled whelk (Busycotypus canaliculatus) and knobbed whelk (Busycon carica). Whelks are considered to be species of shellfish and are managed by the Division of Marine Fisheries (DMF) and the Marine Fisheries Advisory Commission (MFAC). Successful management requires a strong understanding of the fishery and population trends, as well as an accurate assessment of the stock status. 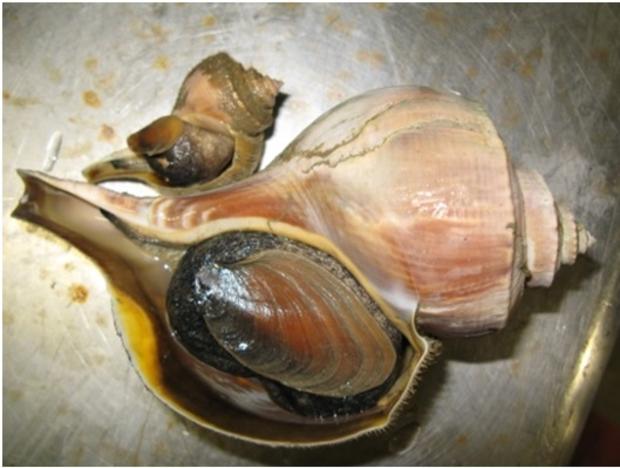 Channeled and knobbed whelks (“whelks”) are edible marine snails. They are carnivorous scavengers and predators of shellfish that inhabit benthic, shallow, nearshore environments. These animals feature a coiled, spiraled shell with a muscular foot that protrudes from its opercular opening.

The species range along the east coast from southern Massachusetts to Florida. Massachusetts represents the northern geographic range for these species and the animals are generally confined to the waters south and west of Cape Cod. This includes Nantucket Sound, Vineyard Sound, Buzzards Bay and Mount Hope Bay. Movement is thought to be limited with only small scale seasonal migrations of less than several miles.

DMF completed two growth and maturity studies on these species in 2013 and 2015. The 2015 study confirmed the findings of the initial 2013 study. Between 2010 and 2015, while these studies were occurring, DMF sampled over 1,500 whelks taken from state-waters. Shell length and width were measured to the nearest millimeter, sex was determined by the presence or absence of male or female reproductive organs, and maturity was evaluated microscopically during dissection.  Whelk, like other large marine snail species, are slow growing animals. DMF found that the incremental growth bands on the operculum suggest a seasonality in growth. Spring and and fall have higher growth rates and some growth occurs during the summer. Growth slowed or ceased during the winter months, when whelks tend to burrow into the sediment and stop feeding.

Based of field observations, whelk tend to spawn during the late summer period. Males directly fertilize the females and more than one male may fertilize a female. Females then develop their egg casings overtime. When spawning begins, the large casings are released in strings by the female whelks and anchored to the sediment. Whelks then hatch about nine months after the egg strings are deposited. There is no larval period for these animals.

DMF considers channeled whelk to be depleted throughout their range within the waters under the jurisdiction of the Commonwealth. A 2018 stock assessment of channeled whelk within Nantucket Sound showed this resource to be overfished with overfishing occurring.

Description of the Fishery

In the early-to-mid 1990s, DMF established a conch pot permit endorsement, implemented a moratorium on new permits, established rules for permit transfers and implemented at 200 trap limit. This was done to limit the proliferation of new trap gear, and it was done in combination with similar management initiatives in other fish pot fisheries. Since 2000, attrition has produced a steady decrease in the overall number of trap permit holders, but the number of active permits has stayed relatively stable at around 90 fishermen.

Despite relatively stability in the number of active permit holders, the quantity of trap hauls began to increase substantially around 2005. As a result channeled whelk landings increased from about 1 million pounds annually to around 2.5 to 3 million pounds annually. This shift in fishing effort was likely driven by a 150% increase in the ex-vessel value for whelks, as well as a serious decline in the Southern New England lobster resource. While Nantucket Sound has always been the epicenter of the trap fishery, this has become increasingly so since the the mid-2000s.

The trap fishery peaked in 2011 and 2012 when over 3 million pounds of channeled whelk valued in excess of $6 million dollars were landed annually. Interestingly, this peak occurred during a time when catch per trap haul (CPUE) was on the decline in Nantucket Sound, as well as the other major harvest areas (Vineyard Sound and Buzzards Bay). This increase in landings was driven by fishermen hauling more traps more frequently. This demonstrates that the resource was becoming depleted despite record high landings. Landings have since decreased to under 2 million pounds per year. This is likely a result of reduced abundance, as well as conservation measures implemented to enhance the spawning stock biomass. High ex-vessel values has buoyed the fishery at a value of around $5 million per year.

In the late 1980s, DMF established a 2¾” minimum shell width for knobbed and channeled whelk. The 2¾” minimum size was not based on a biological metric, but rather the smallest animals that processors were willing to handle. This initial minimum size rule included a tolerance for undersized animals in the retained catch. Then in the early-to-mid 1990s, DMF implemented effort control measures in the trap fishery to reduce the proliferation of trap gear. This included establishing a limited entry conch pot permit endorsement, implementing a 200 trap limit and introducing a December 15 to April 14 closed fishing season.

Management remained static until around 2010. In response to decreases in CPUE in the trap fishery, concerns were raised regarding the sustainability of the whelk resource.  As these animals are relatively stationary, slow growing and late to mature, they are prone to rapid, serial depletion if exposed to intense fishing effort with inadequate conservation measures in place. To address these concerns and initiate improvements to whelk conservation management, DMF conducted a size at maturity study in 2013. The size at maturity studies demonstrated that no female whelks (knobbed or channeled) were sexually mature at the current 2¾” minimum shell width. In fact, female channeled whelk in Nantucket Sound did not begin to reach sexual maturity until they had a shell width of about 3½”, and 50% of female whelk in Nantucket Sound were not sexually mature until they had a shell width of approximate 37/8”. These findings were reaffirmed in a subsequent 2015 study. Female knobbed whelk begin to reach maturity and reach 50% size at maturity at a slightly smaller size.

An analysis of fishery dependent data was also conducted. In addition to a reduction in CPUE in the trap fishery, the data demonstrated that the size of channeled whelk caught by trap fishermen was becoming increasingly truncated around the minimum size. This was problematic because the minimum size did not protect any sexually mature females, and obvious concerns about the declining spawning stock biomass were raised.

Based on this research, DMF initiated a management approach to gradually increase the minimum size to a size where 50% of female whelks would be sexually mature. The gradual approach was necessary to minimize impacts on industry given that these animals are slow growing and only grow at about 1/8” to ¼” per year. In 2013, the Marine Fisheries Advisory Commission (MFAC) approved the first minimum size increase. This raised the minimum shell width from 2 ¾” to 27/8”. The tolerance for undersized animals was also eliminated. Then in 2015, the MFAC approved a second 1/8” minimum size increase, raising the minimum shell width to 3”.

Up until this time fishermen used a variety of tools (e.g., rings, cans, pvc pipe) to measure whelks and determine compliance with the minimum size. However, each of these tools had varying abilities to accurately measure the animals. Moreover, given the asymmetry of the whelk shell the animals could be manipulated to enhance the retention of near legal sized animals. As a greater emphasis was being paid to minimum size management and the undersized tolerance was eliminated, the method of measuring the animals needed to be improved to ensure that it was accurate and repeatable. Given that the whelk fishery is a high volume fishery, the method and tool would have to lend itself to efficient usage.

DMF collaborated with industry and developed the “chute gauge” and parallel method of measurement. The chute gauge is a rigid three-sided open topped gauge with the distance between the inside walls having the same measurement as the minimum shell width. The animal would then be gauged using the parallel method of measurement. This method of measurement required the animal to  dragged through the gauge with its operculum facing down and as flat on the bottom of the gauge as possible, and have the axis drawn between the siphonal canal and the top of the shell be parallel to the walls of the gauge. Those animals that fit through the gauge are considered to be sub-legal sized and must be immediately released on the fishing grounds.

While this method removes any discretion involved in gauging the whelk, the asymmetry of the animal results in the shell width not mirroring the distance between the gauge walls (“gauge width”). In fact, animals that are considered legal using this method have a shell width that is approximately 1/8” to 3/16” larger than the gauge width. Accordingly, using the any orientation method of measurement and a 3” gauge width would result in a de facto minimum shell width of 31/8”.

In order to simplify management, DMF adopted a regulatory approach that would specify the dimensions of the gauge to be used and the method of measurement. Any animals that fit through the specified gauge using this method of measurement would then be considered sub-legal. These regulations were approved by the MFAC for 2017 and the first gauge width was set at 27/8”, resulting in a de facto minimum shell width of 31/16”. Then in 2019, the MFAC approved a schedule to bring the minimum size up to 50% size at maturity. This schedule sets forth biennial gauge increases of 1/8” beginning in 2019 with the gauge width being increased to 3”, and ending in 2029 with a terminal gauge width of 3 5/8. This terminal gauge width corresponds to a shell width of approximately 37/8”, which is 50% size at maturity for channeled whelk in Nantucket Sound.

In addition to the size at harvest controls, DMF also implemented regulations governing daily harvest limits in the mid-2010s. This included a 15 mixed whelk daily recreational limit. This was done to establish a level of activity at which a commercial shellfish permit would be needed to harvest whelks. DMF also adopted a one level filled fish tote mixed whelk limit for commercial hand harvest and SCUBA harvest and a 1,000 mixed whelk limit for trawlers. These limits were implemented to constrain fishing effort at existing limits and prevent the proliferation of new whelk fisheries.