Why add the LOC_ID to your CAMA database?

MassGIS explains the unique parcel identifier that is part of the standardization, describes the advantages of adding this unique identifier to your CAMA database, who supports doing this, and what you have to do to implement this step in your community.

What is the parcel mapping standard’s unique identifier?

The standard’s unique identifier for a parcel is referred to as the “locational ID” (or “LOC_ID” for short); it is based on the location of a point inside each parcel in the standardized parcel mapping and is unique statewide.

The LOC_ID is not intended to replace existing map or CAMA record identifiers. However, the LOC_ID does enable tighter and easier integration between your CAMA database and the standardized parcel mapping. This integration is accomplished by incorporating the LOC_ID for each parcel directly into the corresponding tax listing(s) in the CAMA database.

Why is the LOC_ID needed in addition to the unique CAMA ID, the parcel ID, or the GIS ID?

Who supports using the LOC_ID?

Because the LOC_ID is an easier way of linking CAMA records with parcel mapping, it is supported by all the main parcel map maintenance and GIS consultants working in Massachusetts (Tighe and Bond, James W. Sewall Company, PeopleGIS, Polaris Consultants, MainStreet GIS, CGIS Mapping, CDM Smith, Cartographic Associates (now CAI Technologies), and Applied Geographics); it is also supported by all of the regional planning agencies that provide parcel map maintenance services; other GIS consultants likely also support use of the LOC_ID.

>> See Status map of LOC_ID use

In September of 2014, the MAAO endorsed as best practice the use of the MassGIS Parcel Standard.

How do I get the LOC_ID added to my CAMA database?

Having the LOC_ID added to your CAMA database is a step typically completed by your CAMA software vendor (some communities have staff with this type of expertise). An assessor initiates this step by contacting MassGIS for a crosswalk file that you will then provide to your CAMA vendor. The file from MassGIS links LOC_IDs with the corresponding CAMA database unique ID (e.g., Patriot “AccountNo”, Vision “PID”, PK-Systems “key”, CSC “Link ID”, etc.). The CAMA provider then uses that file to update the CAMA database, with the LOC_ID typically being put into an existing “GIS ID” field in the database (in the CSC CAMA an obsolete field is being re-purposed).

Once they are in the CAMA database, how do I keep LOC_IDs up-to-date?

LOC_IDs for new or reconfigured lots are created by whoever maintains your standardized mapping.  So, if you are requiring that your maps be maintained to comply with Level 3 of the current MassGIS standard, whomever maintains your maps needs to provide you with new LOC_IDs for new or changed lots.  This is probably best done by having them provide a spreadsheet with map/block/lot information in one column and the corresponding LOC_ID in another column.  The tax record can be found in the CAMA system based on map/block/lot information and the new LOC_ID can then simply be copied and pasted into the appropriate location in your CAMA system user screen.  Here’s how to find the location for entering new LOC_IDs in the four most commonly used CAMA systems: 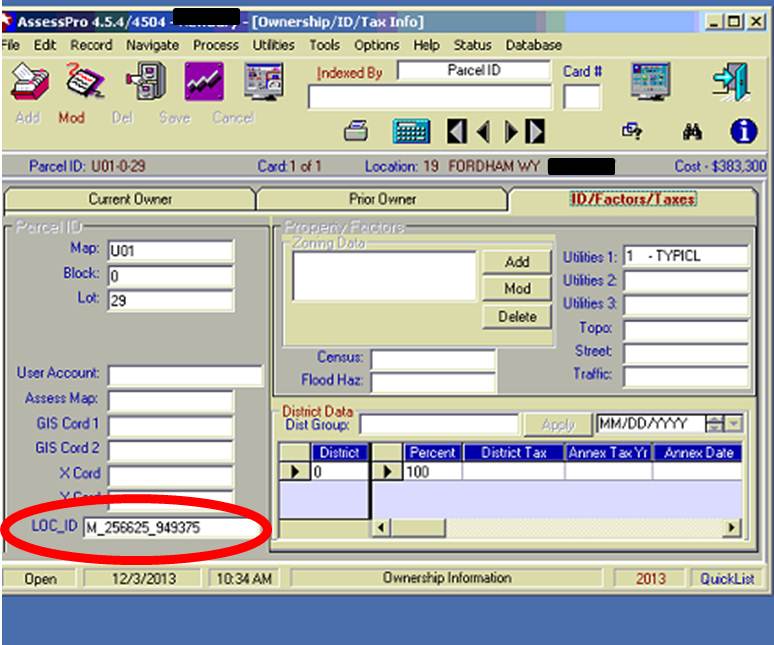 The LOC_ID is being stored in a seldom-used legacy field called Own Acct. It’s in the Parcel record – see below.  “Owner Account” was an account ID used years ago in the original tax collection system and is no longer used.  Assessors can enter data in that field themselves, whether for new or existing accounts.

Go to the Supplemental Data screen and look for the GIS_ID field toward the bottom.

When updated mapping is provided to PK (usually annually), it should be accompanied by a list of new/changed parcel map/lot numbers and their corresponding LOC_IDs. PK will load that info to the database.