A Strategic Monitoring Plan for Massachusetts

In March 2003, EPA published “Elements of a State Water Monitoring and Assessment Program,” to encourage states to collect more scientifically defensible data for water management decisions and for tracking surface water quality status and trends. Every ten years, States are required to develop monitoring strategies to demonstrate how they will implement the EPA guidelines.

WPP identified core principles in the development of the Strategy: a) the focus on the watershed as the planning unit for water quality management, b) the assessment of aquatic biological communities (i.e., bioassessment) as the most reliable indicators of water quality conditions and ecosystem health, c) the application of new monitoring technologies and development of streamlined systems for data processing and analysis, and d) the increased use of partnerships to meet water quality goals. This involves enhancing the sharing of WPP’s monitoring data and expanding WPP’s use of monitoring data from external (“third-party”) sources (see MassDEP’s Volunteer Monitoring resources). Eighteen monitoring program elements are recommended in the Strategy to meet these monitoring objectives.

There are two types of monitoring designs used in WPP’s Monitoring program. In probabilistic or statistical monitoring networks, sites are randomly chosen from a category of waterbodies, such as shallow streams, deep rivers, or lakes. The sites are sampled to estimate the condition of that category of surface water. These surveys are a cost-effective way to report the condition of waters statewide and provide a measure of water quality trends and the effectiveness of water quality management programs.

Deterministic monitoring designs use “targeted” sites chosen to fill data gaps and answer questions about waterbodies. These data are used to assess whether designated uses (such as swimming and boating) are met for each waterbody, identify sources of pollution, and support the development of total maximum daily loads (TMDLs), wastewater permit limits, watershed-based plans, and measurement of water quality trends.

Results of these surveys are submitted to EPA to fulfill the requirements of CWA sections 305(b) and 303(d). The following table summarizes how WPP combines the two types of monitoring designs to meet program needs.

The goal of MAP2 is to provide an assessment with a known statistical confidence as to whether certain designated uses (e.g., aquatic life, recreational, aesthetics) are supported in MA waters and the potential stressors affecting those uses. Wadable rivers and streams were assessed from 2011 through 2015; followed by a survey of lakes and ponds from 2016 - 2018. A four-year assessment of coastal and estuarine waters was initiated in 2020 and will continue through 2023. WPP plans to continue these surveys to evaluate long-term water quality trends and to assess the effectiveness of water quality management programs.

Lakes and Ponds (2016-2018)
This MAP2 network enables an unbiased assessment as to whether the aquatic life, recreational, fish consumption, and aesthetic uses of lakes and ponds are supported statewide. The survey design was based on a computer-generated random selection of waterbodies. The major Massachusetts river basins were divided into three groups (i.e., “West”, “Northeast” and “Southeast”), each containing approximately 25 lakes. The survey focused on one region each year over three years sampling a total of 79 lakes. The following water quality and ecological variables were measured:

WPP is evaluating data from the lakes and ponds survey and will assess the waterbodies in accordance with the Massachusetts Consolidated Assessment and Listing Methodology (CALM) Guidance Manual.

Coastal and Marine Waters (2020-2023)
In 2019, the Massachusetts Coastal Condition Assessment, or MCCA was designed to provide an unbiased assessment of the condition of coastal and marine waters and determine the percentage of these waters supporting the aquatic life use. In addition, the MCCA will establish a baseline to measure future trends in conditions. The MCCA is administered collaboratively by WPP and the Massachusetts Bays National Estuary Partnership (MassBays). The pilot study began in 2020 consisting of 15 sampling sites. From 2021 – 2023, a minimum of 25 sites were selected for sampling each year in different geographic regions of the Massachusetts coastline which, including the pilot year, will result in a total of 90 sites statewide. At the completion of the survey, a final report will be prepared. Field crews record ambient conditions, collect water column profile data and water and sediment samples, assess the benthic infauna community, and record the presence/absence of eelgrass at each site once per month from June through September as listed below:

One goal of the Strategy is to monitor each watershed at least once every seven years, while retaining flexibility to perform additional monitoring or shift resources among the watersheds to meet program needs. The map below illustrates how Massachusetts’ 27 major watersheds and coastal drainage areas are arranged into four major regional groups (A-D) or “cohorts”, each consisting of three to ten river basins or coastal drainage areas.  In turn, the major groups are subdivided into one or two minor sub-groups, each of which represents one year of the seven-year monitoring schedule (A1, A2, etc.). WPP initiated the seven-year targeted monitoring schedule in 2021, selecting 100 stream sites throughout the A1 watersheds (i.e., Concord, Merrimack, Nashua and Shawsheen, see map below). Monitoring included measurements of standard field parameters (pH, dissolved oxygen, temperature); sample collection for laboratory analyses (nutrients, dissolved organic carbon, major ions and E. coli); and habitat, benthic macroinvertebrate, and fish community assessments. 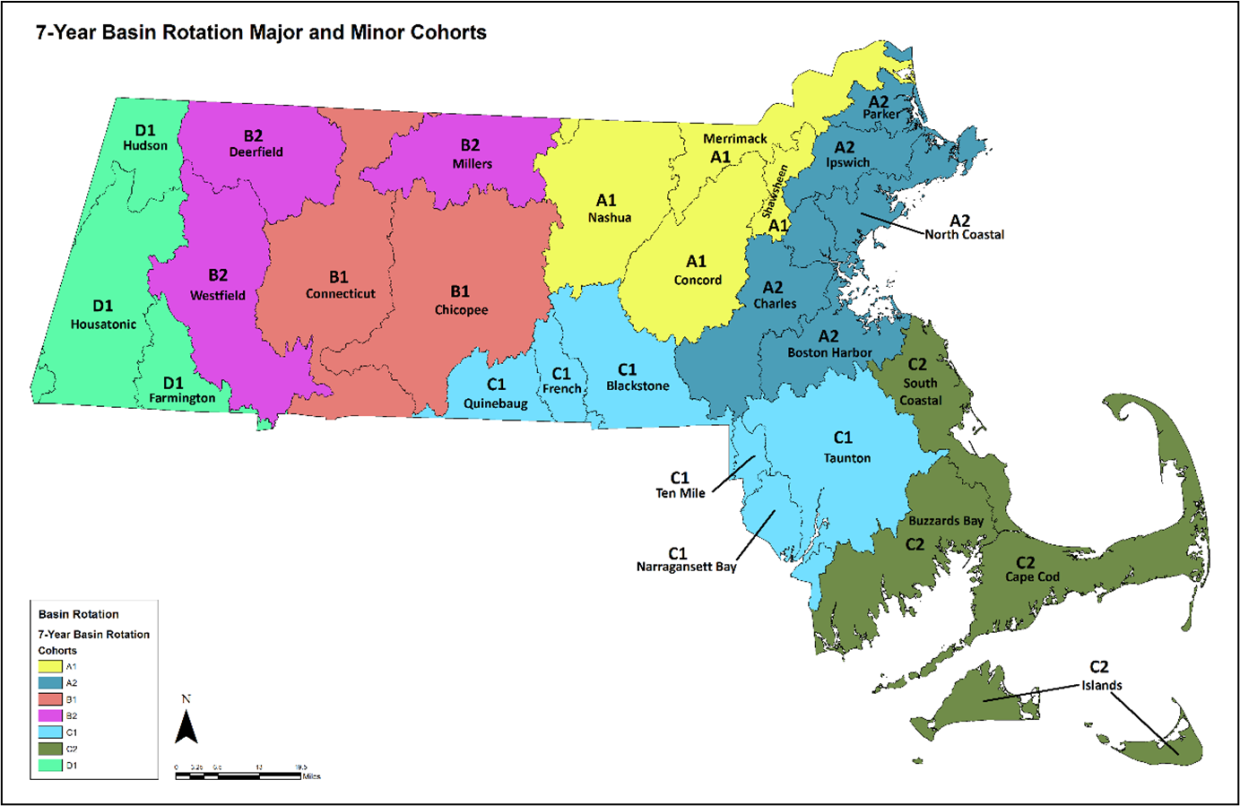 WPP biologists perform habitat assessments and monitor the health of aquatic communities to determine if the aquatic life use is supported in Massachusetts’ rivers, lakes, and coastal waters.  Evaluation of the condition of macroinvertebrate, fish, and algal populations in surface waters provides a direct measure of ecological response to pollutant exposure and habitat degradation. The importance of biological community assessment, or bioassessment, is conveyed in the CWA goal to restore the biological integrity of the nation's waters through the attainment of water quality conditions that provide for the protection and propagation of aquatic life.

Macroinvertebrates
WPP developed three macroinvertebrate community Indices of Biotic Integrity (IBI) for use in assessing the biological condition of perennial (year-round), wadable streams. IBIs integrate multiple biological metrics that respond predictably to a gradient of environmental stressors. IBIs were calibrated using a reference condition approach that identified characteristics of macroinvertebrate communities in least-disturbed streams and established reasonable expectations for what is attainable in similar streams. IBI scores are compared to condition thresholds ranging from severely degraded (an “unhealthy” stream) to exceptional (a “healthy” stream). For riffle-dominated, high gradient streams, Massachusetts’ Level IV ecoregions were sorted into two groups (i.e., Western Highlands (58a through f ecoregions) and Central Hills (58g, 59a through d, f, and h ecoregions) that exhibit distinct biological expectations. An IBI was derived for each group using data from hundreds of samples. A third statewide IBI for low gradient streams was developed using samples collected across Massachusetts and Rhode Island. These IBIs have enhanced WPP’s capacity to identify biological and water quality degradation and have led to better informed aquatic life use assessments for CWA reporting. Benthic macroinvertebrate assessments are performed at up to 100 stream sites per year.

Fish
The structure and function of the fin fish community are measured by WPP to assess aquatic life use attainment. Data quality and comparability are assured using qualified fisheries professionals and the application of consistent methods (e.g., EPA Rapid Bioassessment Protocols) to improve data comparability among wadable sampling sites throughout the state. The fish are collected from multiple habitats (i.e., riffle, run, and pool habitats) in relative proportion to their local availability. Since no formal fish IBI currently exists for Massachusetts, fish community data are used to semi-quantitatively assess the general condition of the resident fish community as a function of the overall richness (number of species) and abundance (number of individuals) of fish present. Stream condition is determined from knowledge of the ecological requirements (e.g., water temperature and clarity, dissolved oxygen content, etc.) and relative tolerance to water pollution of the fish species collected. Massachusetts Department of Fish and Game developed Target Fish Community (TFC) models that describe expected fish community composition in selected rivers. For these rivers, fish community data are compared to the applicable TFC models to assess aquatic life use attainment. Fish sampling is also performed to confirm the presence of cold-water species populations to inform the designation of waters as cold-water fisheries in the Surface Water Quality Standards.

Algae
Algae is a third biological community that WPP monitors. WPP analyzes the attached algae (i.e., periphyton) community in shallow streams, or the phytoplankton in deeper rivers and lakes using indicator species to infer water quality conditions from the environmental preferences and tolerances of the species present. Algal indicators of nutrient enrichment or the presence of metals or other pollutants are noted. Algal biomass determination or chlorophyll analysis are useful to evaluate the primary productivity of a system (i.e., the rate at which energy is converted to organic substances by photosynthetic organisms) and the trophic status of lakes, ponds, and impoundments. Similar information from riverine and coastal waters is used to identify surface waters with elevated nutrient levels.

EPA encourages states to include multiple biological assemblages in their bioassessment programs and for the development of biocriteria. WPP has begun a multi-year design and development of biocriteria using the diatom community as a possible second assemblage. Benthic diatoms are ubiquitous in the aquatic environment, typically abundant, and their short life cycle makes them good indicators of rapid changes in environmental conditions.

Annual summaries of WPP’s water monitoring activities can be found here. These summaries provide an overview of the monitoring elements that were carried out each year and where they occurred. However, they do not present monitoring results.  Information pertaining to WPPs water monitoring data is presented here.