Firefighter of the Year Awards 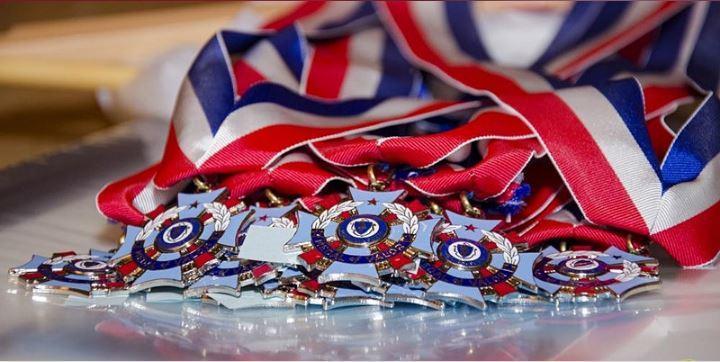 Each year, the governor presides over the "Firefighter of the Year" Awards ceremony to honor outstanding acts of heroism and bravery as well as community service by Massachusetts firefighters.

Nominations for the 33rd annual Firefighter of the Year Awards are now being accepted!

Nominations should reflect conduct and actions that occurred between July 1, 2021, and June 30, 2022.  The head of the department should first review the Nomination Info Sheet for basic information on awards, categories, and criteria. Then, complete and sign the Nomination Form and submit it with any supplemental material (reports, photos, testimonials, etc).  Completed nomination packets may be emailed to Kerry.Weihn@mass.gov or sent by mail to Firefighter of the Year, c/o Kerry Weihn, Department of Fire Services, P.O. Box 1025, Stow, MA 01775.

To read more about the 32nd annual Firefighter of the Year Awards, read the press release. To watch a video of the ceremony, visit the DFS YouTube channel.

The Medal of Honor was presented in-person to Tina Menard on behalf of her husband, Worcester Fire Lieutenant Jason Menard, who lost his life in a November 13, 2019 fire during which he saved a fellow firefighter. The virtual ceremony including a tribute to Lt. Menard can be viewed online at: https://www.facebook.com/MassDFS or YouTube .

Firefighters from the departments of Attleboro, Chicopee, Fitchburg, Hanover. Hanson, New Bedford, Rockland and Worcester will be honored during the ceremony. Worcester Fire Lieutenant Jason Menard will be honored posthumously.

Read about these local heroes and why they were recognized.

We hope you will watch the entire ceremony, but here is a timeline of the video.

Governor Charlie Baker, Lt. Governor Karyn Polito and other state officials presented awards at the 30th annual Firefighter of the Year Heroic Awards ceremony on November 26, 2019. The ceremony was held at Worcester's Mechanics Hall and was emceed by WCVB TV 5 anchor Doug Meehan.

The Governor and the Secretary presented awards to 14 fire departments in the following categories: