Many people may be surprised to learn there are moose living in Massachusetts. If you're lucky enough to see a moose, stay a respectful distance away to enjoy this magnificent animal. 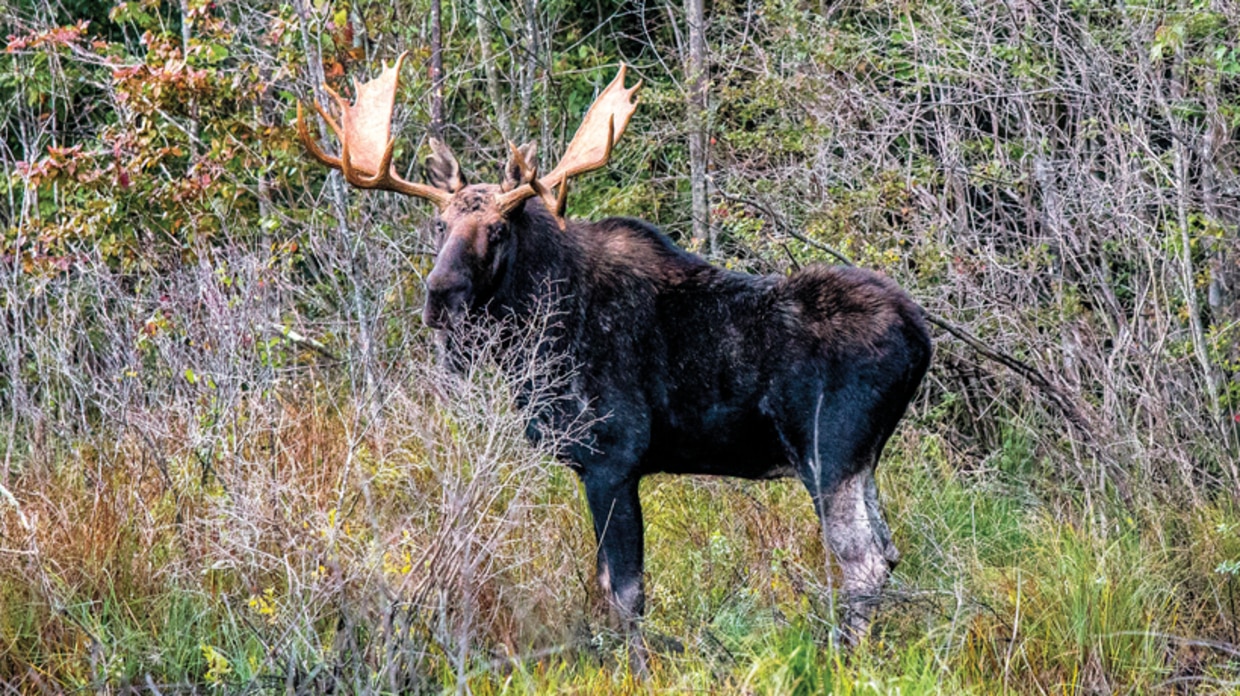 Historically, moose roamed the forests of Massachusetts. However, by the early 1700s, unregulated hunting and extensive forest clearing for pastures and farming by early settlers led to their disappearance. Moose began to appear again in greater numbers in Massachusetts starting around the 1980s, expanding south from neighboring states. Moose populations grew in northern New England from a combination of forest cutting practices and protection from unregulated hunting. Moose can now be found in most of western and central Massachusetts, with occasional sightings in eastern Massachusetts.

Moose are an important natural resource in Massachusetts and their recent return is a testament to the state’s high quality wildlife habitat and management. Moose hunting is prohibited in Massachusetts.

Moose are the largest members of the deer family in North America. In the fall, an adult cow (female) moose can weigh from 500 to 700 pounds and a bull (male) moose can weigh from 600 to over 1,000 pounds. They can stand up to 6 feet tall at the shoulder and have long legs 3–4 feet in length, which allow them to walk in deep snow. Only bulls grow antlers, which begin growing in March to early April and are fully grown by August when the velvet is shed. Antlers are shed beginning in December, though some young bulls retain their antlers until late winter. Moose have large, almost horse-like heads, with a flap of skin that hangs beneath their chin called a bell, which is more pronounced in adult bulls than in cows or immature bulls. Moose vary in color from light brown to almost black, with the face generally dark brown or black on bulls, and light brown on cows.

Cow moose breed at 2 or 3 years of age. In mid-May they give birth to 1 to 2 calves weighing 20–25 pounds. By fall, the calves will weigh almost 300 pounds! Unlike deer, moose offspring stay close to their mother after birth and she will actively protect her calf against predators. Moose are most active at dawn and dusk. The breeding season (rut) for moose runs from September to October. This is a time when rutting moose are seen more often because they are actively seeking a mate. Increased moose activity also occurs in April and May when the adult cow drives off her young of the past year before she calves.

Because of their large size and strength, adult moose have very few natural predators, which explains their general lack of fear of humans and bold behavior. However, young, sick or injured moose can succumb to predation by black bears or coyotes. In Massachusetts, most moose die from vehicle collisions, accidents in the wild (drowning, falls, etc.), disease, starvation, and old age. In recent years, climate change, winter tick, Brainworm (a tiny parasite carried by white-tailed deer), liver flukes, and a combination of stressors have become significant factors for moose populations.

Moose, like deer, lack upper incisors; they strip off browse (twigs and other plants) and bark rather than snipping it neatly. Moose eat large amounts of leaves, twigs, and buds, as well as sodium-rich aquatic vegetation in the summer. Willows, aspens, maples, oaks, fir, and viburnums are their preferred foods. Land areas recently logged or disturbed by fire, wind events, or beavers provide excellent moose habitat as these sites contain new plant growth. In the summer, moose tend to seek food and relief from flies and mosquitoes by spending time in wetlands. Winter food mostly consists of buds and twigs, needle bearing trees, and hardwood bark. A healthy adult moose can eat 40–60 pounds of browse daily.