DCR is undertaking the redesign for reconstruction of Morrissey Boulevard between Mt. Vernon Street and Neponset Circle.

The main goals of the project are to provide more effective drainage and flood control; increase safety for all users; restore the historic character of the Parkway through implementation of landscape and urban design elements; improve accommodations for cyclists and pedestrians; improve access to abutting DCR parks and recreational properties; and maintain sufficient capacity for regional traffic. The project will incorporate a number of sustainable environmental features and is intended to make this critical corridor resilient to climate-driven impacts for the next 50 years or more.

Morrissey Boulevard is a critical arterial roadway that services a combination of regional commuter traffic and local institutions, residents, and businesses. It is also a key connector providing access to important open spaces and recreational areas, including the Neponset River Greenway, Tenean Beach, Victory Road Park, and Malibu Beach.

The roadway also happens to be one of the most climate-vulnerable pieces of infrastructure in Greater Boston.  The Department of Conservation and Recreation (DCR) must fully or partially close the roadway on a regular basis, due to flooding caused by high tides, intense storms, or combinations of both.  The frequency of flood-related closures is only expected to increase due to a number of factors related to climate-change, including sea level rise and escalating storm intensity. 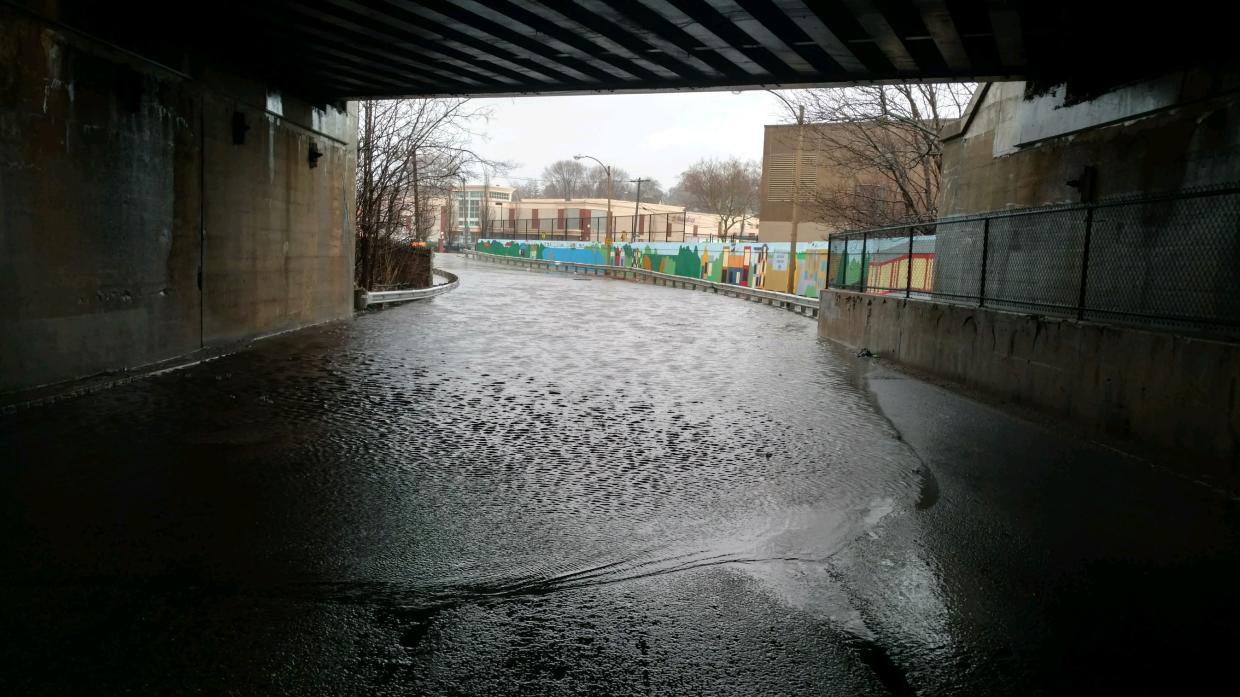 Morrissey Boulevard is also not as welcoming as it could be to users wishing to cross it or to travel along it, on foot or on a bicycle. With its multiple travel lanes, fast-moving traffic, large intersections, and inconsistent landscape treatments, the corridor can be difficult and intimidating to navigate and lacks much of the parkway character typical of other historic DCR roadways.

The purpose of this project, therefore, is to redesign and reconstruct Morrissey Boulevard so that it is more resilient, more accommodating of non-vehicular modes, such as walking and bicycling, and more of a connector – and less of a barrier - between abutting communities and all of the recreational and open-space resources that the Dorchester Bay area has to offer.  At the same time, the redesigned roadway will also continue to serve its critical role in the regional vehicular transportation network, and as the primary means of access to abutting properties.

The planning and design process builds on environmental and preliminary design work that was completed in the 1990s.  It is guided by the most up-to-date modeling related to flood risks and will incorporate natural and sustainable processes to protect the roadway and enhance water quality in Dorchester Bay.  Current best practices for pedestrian and bicycle facilities are being applied to the corridor to ensure the safest and most inviting experience.  Traffic signals, signs, and pavement markings will be completely modernized, increasing the efficiency of traffic flow.  New roadway lighting, landscaping, and urban design amenities will be provided, and will be consistent with DCR’s Historic Parkways Treatment Guidelines.

DCR is committed to involving  the community during all phases of design and construction of the Morrissey Boulevard Project.   To that end, the project includes a robust community planning process to identify critical issues and opportunities related to the project and to assist in the development of concepts and ideas to meet project goals.  In addition to targeted stakeholder meetings, the community engagement process includes a series of public meetings, held as various design project milestones are reached, communications with the public through electronic media, and the posting of meeting materials and PowerPoint presentations on DCR’s website.

In mid-2015, DCR engaged a team of engineers, landscape architects, and ecological specialists led by HDR Engineering, Inc. to begin the planning and design process, committing $3.2M toward that purpose.   During the fall of 2015, the team completed a new topographic and right-of-way survey of the corridor; performed traffic counts; field-delineated environmental resources such as wetlands; and collected other relevant technical data.

On March 28, 2016, DCR held a public meeting/listening session to share an analysis of the information obtained, introduce the redesign project, and obtain input from the community on key issues and concerns regarding the parkway.  This public meeting was followed by a three-week public comment period.

At a public meeting held on September 27, 2016, DCR presented an introduction to, and obtained feedback on, conceptual designs for the full length of the project, with a focus on concepts for the reconfiguration of roadways lanes, intersections, crosswalks, and adjoining sidewalks and paths used by pedestrians and bicycles.   This public meeting was followed by a three-week public comment period.

On June 27, 2017, DCR, with the team of consultants, held a public meeting to present 25% plans for the full length of the project at a public meeting, which was followed by a three-week public comment period.

During the fall and early winter of 2017, DCR met with several targeted stakeholder groups to obtain their feedback on the project.

As these portions of the public process concluded, DCR began to explore requests that had been received for that would demonstrate the agency’s commitment to working with residents wherever possible.  These short-term improvements  include several traffic signal phase  sequence and timing modifications DCR will complete in the fall of 2018 at the Freeport Street, Bianculli Boulevard, and two Mount Vernon Street intersections.  In addition to these improvements to traffic signal timing, DCR will also inspect all traffic signal equipment, including poles, pedestrian buttons, lamps, utility cabinets, loop detectors, and other elements to ensure that they are in good repair.  Any deficiencies will be repaired.

In terms of the overall Morrissey Boulevard project, in the course of this year, DCR has been coordinating peer reviews by MassDOT and the City of Boston, to ensure that all parties are in agreement regarding the approach and scope of the project.  Additionally, DCR is hard at work identifying and addressing the right of way and encroachment issues that have cropped up during our planning process. Addressing these types of concerns is crucial to achieving our 75% design milestone. This fall, DCR will be filing an Environmental Notification Form (ENF) on the project with the Massachusetts Environmental Policy Act (MEPA) office with the Energy & Environmental Affairs Secretariat.  The MEPA process will provide opportunities for the public to review and comment on potential environmental impacts of the project; for information on how to participate in the process, see   https://eeaonline.eea.state.ma.us/EEA/emepa/emonitor.aspx .

Subsequent to the MEPA process, later in the fall of 2018, DCR will be holding a public meeting to present, and obtain feedback on, 75% design plans for the entire length of the Morrissey Boulevard project.

During the project, DCR will continue to work closely with state and local officials, as well MassDOT and a variety of Boston public agencies, to coordinate the Morrissey Boulevard Redesign for Reconstruction project with other local and regional planning and design efforts.

If you have questions or concerns about this project  or wish to subscribe to a listserv to receive periodic project updates, please email Mass.Parks@state.ma.us, noting "Morrissey Redesign" in the subject line or call 617-626-4973.

Email Department of Conservation and Recreation at mass.parks@state.ma.us