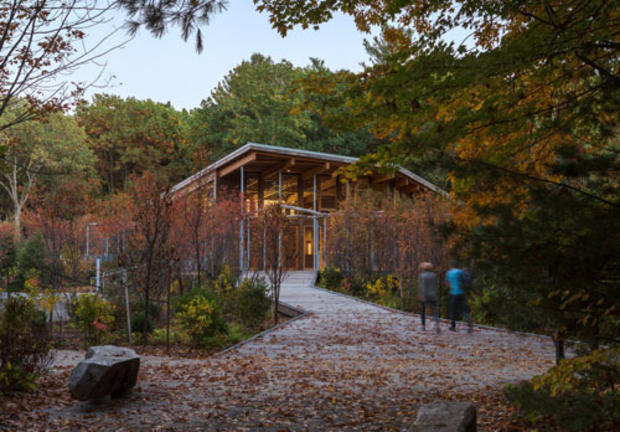 Walden Pond State Reservation is an internationally famous National Historic Landmark, considered the birthplace of the modern Conservation Movement through its association with author and naturalist Henry David Thoreau.  He lived and worked at Walden Pond from July 1845 to September 1847, and seven years later, published his iconic work Walden; Or, Life in the Woods.

The Reservation is also a heavily used recreation facility with a very popular public swimming beach, as well as opportunities for hiking, boating, and fishing.  Approximately half a million people visit Walden Pond State Reservation annually, many of whom travel from out-of-state or from other countries.

The new Visitor Center serves as a gateway to the Reservation. This beautiful wood and glass building is truly interwoven with the landscape

Features include a one-story design; an extensive deck; interior exhibit space; larger meeting and administration/operations space; a bookstore/gift shop; and, public bathrooms. The new zero net energy Visitor Center is a model of “green technology,” featuring sustainable building materials, including locally sourced wood, low flow plumbing fixtures, a super-insulated building, and high efficiency windows. The DCR is expected to achieve LEED Gold status for this building, making it the first LEED building in the DCR building portfolio.
The information desk, benches in the Visitor Center, desktops, and conference room table were all made from wood from the immediate site.  DCR Forestry assisted in milling wood that was cut down on-site to make way for the new building; this, in turn, was sent to a kiln for drying and ultimately has become part of the project.

The project also includes seamless universal access throughout the immediate site and building.  Pedestrian safety improvements were accomplished through over 9,000 plantings, minimal fencing and an expanded, more clearly marked crosswalk across Route 126.

Phase I of the project involved installation of utilities, including a new septic system, and construction of a 100 kW solar photovoltaic carport canopy placed over two existing parking lots to power the new Visitor Center and the rest of the park.  The solar canopy project included two electric vehicle re-charge stations with four charging ports, emphasizing the Commonwealth’s commitment to environmental sustainability.

The solar canopy went live in the summer of 2016.  In the first three months of operation, the solar array produced more than half the building’s projected annual energy consumption – truly making this a net zero building.

The Phase I construction contract for installation of utilities was awarded to Blue Diamond Equipment Company of Foxboro.

The contract for design and construction of the solar canopy project was awarded to Ostrow Electric, headquartered in Worcester, with Solar Design Associates of Harvard.

Phase II of this project, construction of the Visitor Center, was completed with Division of Capital Asset Management and Maintenance (DCAMM) oversight.

Maryann Thompson Architects of Watertown designed the building; Michael Van Valkenburgh Associates, Inc. of Cambridge was the Landscape Architect; and Object IDEA of Salem was the exhibit designer. The General Contractor for the new Visitor Center was Stutman Contracting, Inc. of Oxford.

In September 2017, DCR installed exhibits that interpret the life and legacy of Henry David Thoreau. The exhibits consist of a 3-D map of the Reservation, a timeline of Thoreau’s two-year stay at Walden Pond, various Thoreau-related artifacts on loan from the Walden Woods Project and the Thoreau Society, and a sustainability touch-screen exhibit that displays energy production and highlights the sustainable elements of the building. The Visitor Center also contains an interactive display installed by the Walden Woods Project that allows visitors to identify their “Walden”, a place of special significance to them, and a 18-minute introductory film on Henry David Thoreau that was executively produced by Ken Burns and donated by the Walden Woods Project. Two interactive mobile exhibits are anticipated to be installed in the visitor center in early 2018.