The Wachusett Controlled Deer hunt in the designated  "Reservoir Zone" hunting area (the 2,800 acres around the Wachusett Reservoir within the boundary set by Routes 110, 12, 140, and 70) will take place during the archery, shotgun and primitive firearm seasons. If the number of applicants exceed the limit to conduct a safe hunt, then permits for this hunt will be selected by lottery.  Applications will be available on this page from July 1 to August 31.  The lottery, if needed, will be selected in early September.

Hunting on all other areas of DCR Watershed lands in the Wachusett Reservoir Watershed require a 5-year access permit from DCR that can be requested at any time. 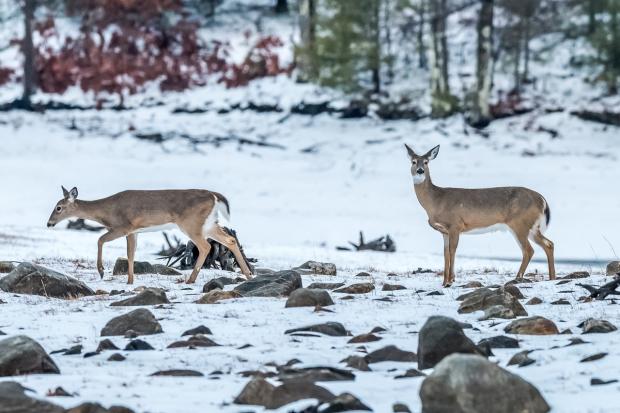 There are two types of DCR Watershed permits based on the location of the property:

The DCR Permit is in addition to a valid Massachusetts Hunting License and a Hunter Safety Certificate, if required, by the Division of Fisheries and Wildlife.

The Division of Water Supply Protection (DWSP) has developed several interactive maps with detailed information about hunting areas on DWSP property.  There are two ways to access these maps: one is an online program that is accessible from your desktop computer or mobile device’s web browser; the other is through an App you can download directly to your mobile device and use in the field.  The mobile device App is recommended for use in the field.

Click on the links below to directly access the on-line program.  Please see the Instructions for Using DCR Division of Water Supply Protection's Deer Hunt Interactive Maps for information about the mobile app.

Note: Location information on these maps is for reference purposes only.  The maps are not meant to be used to determine accurate location with regards to boundaries or other features.  Please obey signage and respect our neighbors.  Hunters should be aware that these maps are updated as needed and setbacks, boundaries and available features may change.

DWSP has designated a "Reservoir Zone" hunting area as the 2,800 acres around the Wachusett Reservoir within the boundary set by Routes 110, 12, 140, and 70.

The Wachusett Controlled Deer hunt will take place in 2022 from October 17 to December 31 for the following types of hunting:

The Reservoir Zone is open for white-tailed deer hunting ONLY.

Hunters must apply for a permit.  If a hunter threshold is reached, permits will be a randomly selected by lottery based on a specific hunter density. Selected hunters will be given a special access permit to hunt within the Reservoir Zone.

Hunters will be required to walk into this zone from one of the existing gate locations. 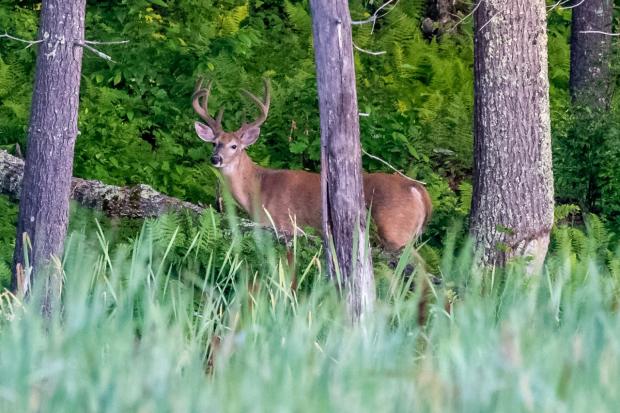 Harvest data is important to understand the deer populations on DCR Division of Water Supply Protection lands.  Information collected about the deer harvest helps DCR with the management and logistics of the hunts held on the Quabbin Reservoir, Wachusett Reservoir, and Sudbury Reservoir watersheds, which provide drinking water to 3.1 million people.

Harvest data must be submitted to two agencies: Massachusetts Division of Fisheries and Wildlife (MassWildlife) and DCR Division of Water Supply Protection (DWSP). It is a LEGAL REQUIREMENT to submit your harvest information to MassWildlife through the MassFishHunt system. It is also required that you submit your harvest information to DWSP’s database.

Deer hunting was prohibited on Wachusett Reservoir watershed lands since its construction at the beginning of the 20th century. DCR's land ownership at Wachusett Reservoir for most of the 1900s was just the property around the reservoir itself.  Significant acreage, often collections of small parcels scattered around the watershed, have been acquired since 1985 to the preserved the source drinking water for 3 million people.  A successful pilot hunting program began in 1996 on DWSP lands west of Interstate 190, although nearly 7,000 acres east of the highway remained closed to hunting.

DCR Foresters have identified significant impacts on forest regeneration in the un-hunted lands closer to reservoir itself.  Deer densities above a certain threshold have an impact on tree regeneration and growth.  DWSP staff estimated deer populations, documented forest regeneration impacts, and concluded that additional deer hunting is necessary to maintain the Wachusett Reservoir watershed forest.

The management of deer in the Wachusett Reservoir watershed is outlined in DWSP's 2017 Land Management Plan. The plan discusses the issue of utilizing hunting as a means to reduce the deer density to acceptable levels to minimize impacts to the water supply protection.  Following a public meeting and comment period in June 2018, DCR established a hunting program for its Wachusett Reservoir watershed properties.