About the Supreme Judicial Court

The Supreme Judicial Court (SJC), established in 1692, is the oldest appellate court in continuous existence in the Western Hemisphere and operates under the oldest, still functioning written constitution in the world.

History of the Court

King William III (William of Orange) and Queen Mary II assumed the throne of England in 1688, an event known to us as the "Glorious Revolution." At this time, the colony of Massachusetts Bay had been without a charter for five years, as the previous charter had been revoked by King James II due to the colony's violating trade restrictions imposed by England and exhibiting religious intolerance toward members of the Anglican Church. In 1691, at the urging of Reverend Increase Mather, Rector of Harvard and Pastor of Second Church in Boston, King William and Queen Mary issued a charter which established the Province of Massachusetts. Known as the Second Charter, it authorized the provincial government to "erect and constitute judicatories and courts of record . . ." During the spring of 1692, as witchcraft hysteria gripped Salem and its environs, Colonial Governor William Phips appointed a special Court of Oyer and Terminer to hear and determine charges of witchcraft within the counties of Essex, Middlesex, and Suffolk. This Court permitted "spectral evidence," the testimony of an allegedly afflicted person that the accused had appeared in the form of an apparition. Between June 2 and October 29, 1692, the Court of Oyer and Terminer sentenced twenty people to death. This Court was dissolved at the end of October, 1692, but several dozen people remained in prison, awaiting trial on the charge of witchcraft.

On November 25, 1692, the General Court passed legislation creating the Superior Court of Judicature and various lower courts. The five Justices of the newly-established Superior Court of Judicature sat for the first time on January 3, 1693, in Salem. The new Court, which ignored spectral evidence as unreliable, heard the cases of twenty-six persons accused of witchcraft; twenty-three were found not guilty and the remaining three were later pardoned by the Governor.

The Superior Court of Judicature was a trial and appellate court; the court had original jurisdiction over felony prosecutions, and appeals consisted of trials de novo (a new trial with evidence).

The Superior Court of Judicature played an important role in this nation's struggle for independence. In 1761, the Court decided the "Writs of Assistance" case, one of the most important cases heard in colonial America. In that case, Boston attorney James Otis argued that the writs - general warrants that allowed officials to search for smuggled material within any suspected premises - violated man's inherent and inalienable rights. Though the court upheld the writs, Otis's argument galvanized the colonists. John Adams, who witnessed Otis's argument, wrote, "then and there, the child Independence was born."

In 1775, after the battles of Lexington and Concord, the Massachusetts Revolutionary Council took over the colony's government and removed the justices of the Superior Court of Judicature. The Council replaced four of the five justices who had been appointed by the Royal Governor with revolutionary sympathizers, including John Adams, who was appointed as Chief Justice. 2 In 1780, the Constitution of the Commonwealth of Massachusetts went into effect and the Superior Court of Judicature was given a new name: the Supreme Judicial Court of Massachusetts. The Massachusetts Constitution proclaims the centrality of judicial independence in Article 29:

It is essential to the preservation of the rights of every individual, his life, liberty, property, and character, that there be an impartial interpretation of the laws, and administration of justice. It is the right of every citizen to be tried by judges as free, impartial, and independent as the lot of humanity will admit. It is, therefore, not only the best policy, but for the security of the rights of the people, and of every citizen, that the judges of the supreme judicial court should hold their offices as long as they behave themselves well, and that they should have honorable salaries ascertained and established by standing laws.

Over time, as the appellate caseload grew, the Supreme Judicial Court gradually relinquished its trial court jurisdiction. The legislature removed the court's original (trial) jurisdiction over tort cases in 1880 and over capital (murder) cases in 1891. The Appeals Court was created in 1972 to relieve the appellate burden on the Supreme Judicial Court.

The SJC is the Commonwealth's highest appellate court. The Court consists of a Chief Justice and six Associate Justices appointed by the Governor with the consent of the Executive Council. The Justices hold office until the mandatory retirement age of seventy, as do all Massachusetts judges.

The seven Justices hear appeals on a broad range of criminal and civil cases from September through May. Single Justice sessions are held each week throughout the year for certain motions pertaining to cases on trial or on appeal, bail reviews, bar discipline proceedings, petitions for admission to the bar, and a variety of other statutory proceedings. The Associate Justices sit as Single Justices each month on a rotation schedule.

In addition to its appellate functions, the SJC is responsible for the general superintendence of the judiciary and of the bar, makes or approves rules for the operations of all the courts, and in certain instances, provides advisory opinions, upon request, to the Governor and Legislature on various legal issues.

The SJC also has oversight responsibility in varying degrees, according to statutes, with several affiliated agencies of the judicial branch, including the Board of Bar Overseers, the Board of Bar Examiners, the Clients' Security Board, the Commission on Judicial Conduct, the Massachusetts Legal Assistance Corporation, the Massachusetts Mental Health Legal Advisors' Committee, and Correctional Legal Services, Inc. 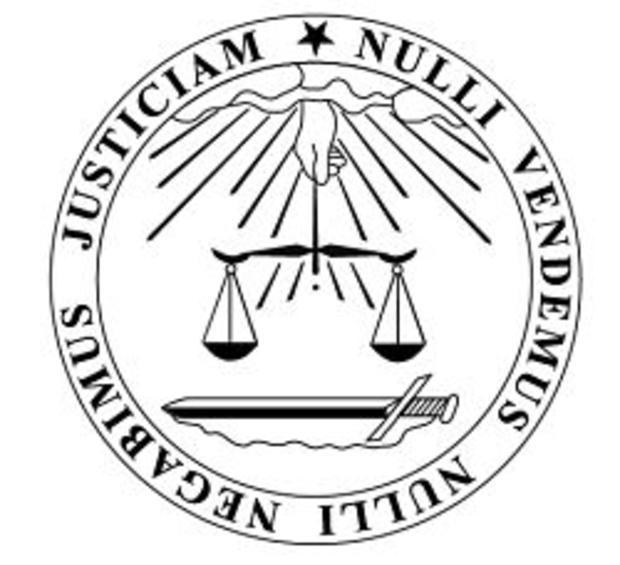 To promote the rule of law and foster public trust by leading an independent judiciary that assures every person equal access to the fair, timely and impartial resolution of disputes in courts managed with efficiency and professionalism.

The court's modern mission statement derives from the court's historic seal of 1785, which contains a promise made in the Magna Carta -- Nulli Vendemus Nulli Negabimus Justiciam. An English translation of this Latin text is "We sell justice to no one; we deny justice to no one".