The plants listed below are good choices for the rugged coastal conditions of Massachusetts. The Coastal Beach Plant List, Coastal Dune Plant List, and Coastal Bank Plant List give recommended species for each specified location (some species overlap because they thrive in various conditions). For a printer-friendly version of this web page, see the PDF copy of the Coastal Landscaping in Massachusetts - Plant List (PDF, 605 KB).

Photos and additional information for selected species are available on the following pages:

CZM recommends using native plants wherever possible. The vast majority of the plants listed below are native (which, for purposes of this website, means they occur naturally in eastern Massachusetts). Certain non-native species with specific coastal landscaping advantages that are not known to be invasive have also been listed. These plants are labeled “not native,” and their state or country of origin is given in parentheses. (See definitions for native plant species and non-native plant species at the bottom of this page.)

Sheltered intertidal areas (between the low-tide and high-tide line) of beach, marsh, and even rocky environments are home to particular plant species that can tolerate extreme fluctuations in water, salinity, and temperature. The following plants are appropriate for these conditions along the Massachusetts coast.

Dry beach areas are home to plants that can tolerate wind, wind-blown sand, salt spray, and regular interaction with waves and flood waters. Certain plants actually thrive on accumulations of sand to help them grow. The plants listed below are appropriate for dry beach conditions in Massachusetts.

Plant List for Exposed Areas of a Coastal Dune

Fronting dunes and exposed secondary dunes are habitat for plant species that can tolerate wind, wind-blown sand, and salt spray; endure interaction with waves and flooding; and often even thrive on sand inundation. The plants listed below, as well as those listed above for Dry Beach areas, are appropriate for these environments along the Massachusetts coast.

Plant List for More Sheltered Areas of a Coastal Dune

More protected secondary dunes are able to host a greater variety of plant species, because they are more sheltered from wind, salt-spray, and wave action. The plants listed below, as well as those listed above for Exposed Areas of a Coastal Dune, are appropriate for these more sheltered dune environments in Massachusetts.

Plant List for Exposed Areas of a Coastal Bank

The top and face of the coastal bank is where the landform is most exposed to wind, salt spray, and storm waves. The plants listed below are appropriate for the rugged conditions of an exposed coastal bank in Massachusetts.

Plant List for More Sheltered Areas of a Coastal Bank

Areas landward of the top of coastal bank are more protected from wave action, but may still be significantly affected by wind and salt spray. The plants listed below, as well as those listed above for Exposed Areas of a Coastal Bank, are appropriate for these more protected areas of the coastal bank in Massachusetts.

For more information about many of the plants that are listed above, visit the United States Department of Agriculture (USDA) Natural Resources Conservation Service's (NRCS) PLANTS Database, the University of Connecticut (UConn) Plant Database of Trees, Shrubs, and Vines, the Lady Bird Johnson Wildflower Center Plant Database, and the Native Plant Trust’s Go Botany website. The specific native status of each plant was determined by using The Vascular Plants of Massachusetts: A County Checklist published as a CD by the Natural Heritage and Endangered Species Program. 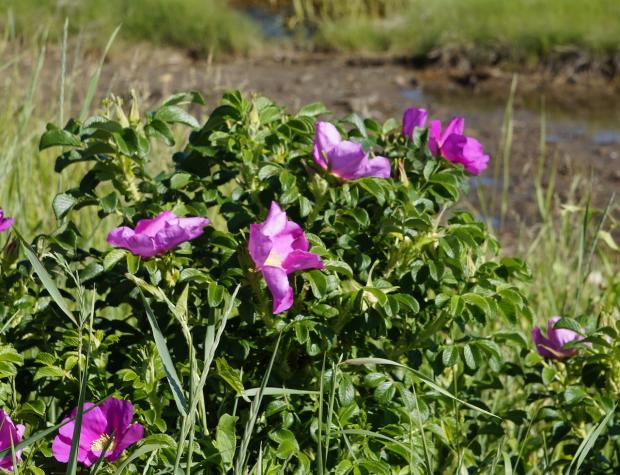 Rugosa rose (Rosa rugosa) is considered to be non-native (native to eastern Asia) and potentially invasive in some regions or habitats of Massachusetts and may displace desirable vegetation if not properly managed. Though the shrub is extremely tolerant of sea spray and effective at directing pedestrian access away from dunes, it has the ability to form dense thickets that shade and outcompete other native bank, beach, and dune plants. Rugosa rose can also spread vigorously through both seed dispersal (carried by the rose hips) and underground rhizomes. Therefore, care should be taken when considering planting rugosa rose on coastal properties.