Canada geese thrive in residential and suburban areas, and can sometimes become a nuisance. Read on to learn about geese and get tips for avoiding and solving problems with these big birds. 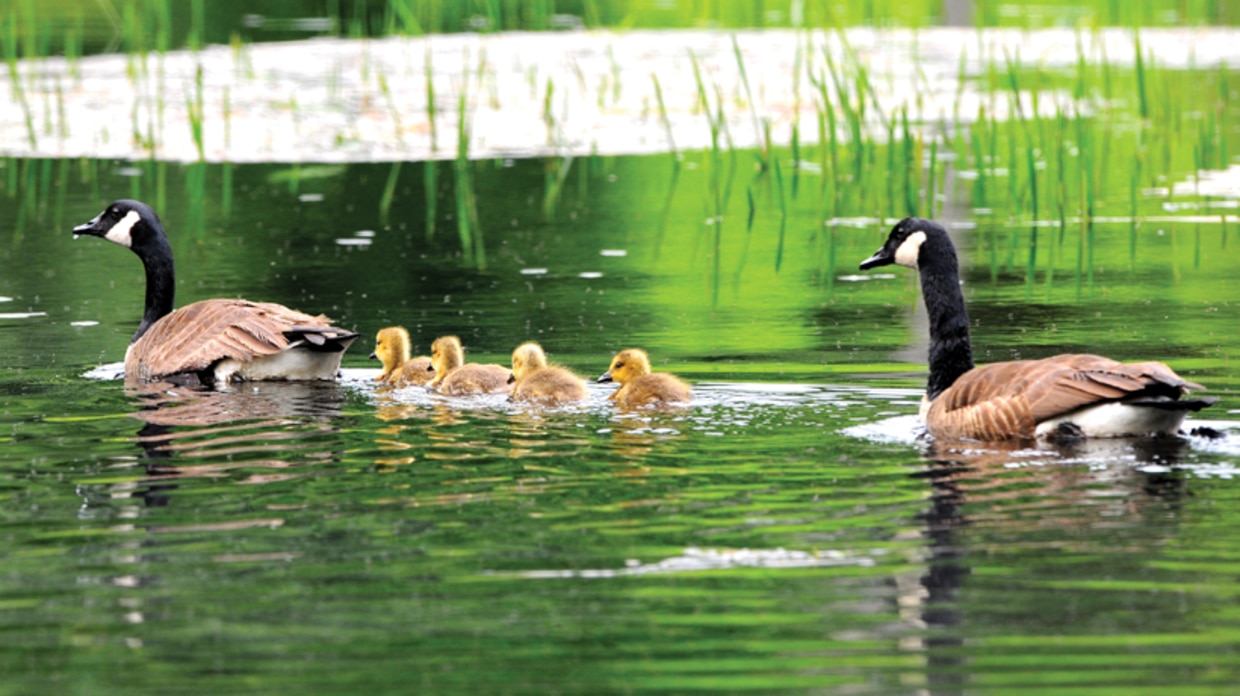 Perhaps no sound more clearly evokes an image of wilderness than the honking of migrating geese. Canada geese have passed through Massachusetts on their journeys to and from their arctic breeding grounds for centuries. Prior to the 1930s, it was unusual for geese to nest here, yet today in Massachusetts you can find Canada geese any time of the year. In fact, in some areas, people feel there are too many geese!

Canada geese are large birds, averaging 10–14 pounds. Among waterfowl in North America, Canada geese are second only to swans in size. Their long black neck and white cheek markings are particularly distinctive.

Geese form permanent pair bonds, but if one goose dies, the other will seek a new mate in the next breeding season. Most Canada geese don’t begin mating until they are three years old. Adult females lay 4–6 eggs in a clutch. If the clutch is destroyed, geese generally don’t re-nest, but with two large birds guarding a nest, the chances of success are good. Usually by the time the young are 4–6 weeks old, the broods begin gathering in large flocks. Non-breeders and yearlings form separate flocks. By fall, they all gather into one large flock for the winter. There are two different populations of Canada geese in Massachusetts. The first is the migratory population which passes through in the spring and fall. Massachusetts is one of the many resting areas for these migrating birds. The second is the resident population: descendants of captive geese used by waterfowl hunters. When live decoys were outlawed in the 1930s, many captive birds were released into the wild. With no pattern of migration, these geese began nesting. In the 1960s and early 1970s, MassWildlife moved geese from the coast into central and western Massachusetts to the applause of both hunters and non-hunters. No one imagined the population explosion that followed. While MassWildlife has recorded geese living up to 22 years in the wild, 60% of geese live 4 years or less, and only 10% live beyond 8 years. Geese in urban areas tend to live twice as long as those in more rural areas.

Geese are primarily upland grazers. Lawns at houses, golf courses, and mowed parks that are well-watered, fertilized, and bordering water provide an excellent source of food. In suburban areas, there are few natural predators. Hence, they nest on muskrat houses, beaver lodges, tussocks, and on islands in reservoirs where territorial defense breaks down and geese nest within a few yards of one another.

As goose numbers increase, so do problems, especially with goose droppings. Canada geese produce a half pound to a pound and a half of dropping every day. Now geese are on golf courses, in gardens, over shellfish beds, on lawns, beaches, water supplies, and cranberry bogs. Here are a few suggestions to prevent goose grief. Keep in mind that persistence and a combination of tactics will keep geese from becoming pests.

Geese (and ducks) concentrate wherever people feed them. Feeding encourages birds to stay in one place and build up flock sizes the habitat can’t support. Water quality may suffer. Feeding makes geese less wary of people. It is in the birds’ best interest to stop providing them with food.

Putting out flags, tying aluminum pie plates along strings, and using scarecrows may help keep geese away from an area until they learn these objects pose no threat. Full bodied swan or coyote decoys sometimes work because geese perceive the decoys as threats. It’s important to move decoys periodically or the geese will realize the decoys aren’t real. For an active approach, try walking up to the birds and flap a tablecloth. Trained dogs are especially effective. Loud noises may also work, but geese can adapt to noise.

Geese walk to their feeding sites from water, and will rarely fly over a fence, especially during the molting period (summer) when the birds are flightless. A 3-foot chicken wire fence is an effective barrier. Geese like to be able to see around obstacles, therefore, planting a hedge or leaving a wide swatch of uncut weeds between water and mowed grass creates a natural, low maintenance barrier.

If you destroy or take eggs from a nest, the gees will continue to lay eggs and replace the missing ones. It is illegal to destroy eggs of most bird species, including Canada geese.

You can apply for a special permit to addle eggs or destroy geese nests on your property (application to apply for a permit can be found below). Addling is shaking, puncturing, or freezing eggs and returning them to the nest. Dipping the eggs in corn oil is the simplest and most common approach. Breaking up the eggs is often ineffective because geese will just lay more eggs.

The presence of Canada geese is not enough reason to get a permit to addle eggs. There must be a reasonable basis for addling eggs, such as property damage.

Canada geese are important and valuable birds in Massachusetts for which a regulated hunting season and management program have been established. Even when geese are discouraged by the above tactics, they can move elsewhere and bring problems to other areas. To achieve a reasonable comfort level for both geese and people, the number of geese must be reduced. Geese have been hunted for centuries and their tasty meat is prized. Timing and length of hunting seasons, the number of birds that can be taken, and hunting methods are strictly regulated. In 1995, the Massachusetts Fisheries & Wildlife Board instituted special “early” and “late” goose seasons designed specifically to reduce the resident goose population, by allowing hunting in September before migrant birds move through and in late January into mid-February after migrant geese have moved south. Resident geese are also harvested during the regular waterfowl hunting season. Recent studies indicate that for populations to be controlled, at least 30–35% of the birds need to be harvested annually. Currently, the hunting harvest is about 25%. Some municipal ordinances effectively prohibit hunting, inadvertently creating “sanctuaries” that allow buildup of flocks. Creative solutions allowing for hunting geese in season include: golf clubs and race tracks inviting waterfowlers onto their grounds at designated hours; towns networking with sportsmen’s clubs to find waterfowl hunters to hunt municipal properties and reservoirs within certain guidelines; and landowners opening their lands to hunters willing to abide by restrictions the landowner imposes.

If you are experiencing problems with Canada geese or have questions, contact your nearest Masswildlife office.