The Land Court has superintendence authority over the registered land districts in the county Registries of Deeds and plays an important role in facilitating the transfer of registered land property ownership.

The Land Court has exclusive, original jurisdiction over the registration of title to real property and over all matters and disputes concerning such title subsequent to registration.  Registration of title occurs when the Land Court, after having the title exhaustively searched by a court-appointed title examiner, and after due process is afforded to all interested parties, reviews and then adjudicates and decrees the state of the title.  Thereafter the current state of the title, as it is sequentially updated by registration of future transactions, is embodied in a certificate of title which not only evidences title, but is in fact the guarantee of title, subject only to the exceptions provided by statute and matters of federal law.  Subsequent owners of registered land are issued numbered certificates describing the property and noting any encumbrances (such as mortgages) or rights affecting the property.  The initial decree of registration and the subsequent certificate of title are in rem, that is, against the whole world.

In its role overseeing the Commonwealth’s system for the registration of title to real property, the Land Court exercises superintendency authority over the registered land districts in each registry of deeds.  The Land Court has both judicial and administrative powers and a staff consisting not only of judges and clerks, but of survey engineers, attorney title examiners, and other technical staff skilled in real estate matters. 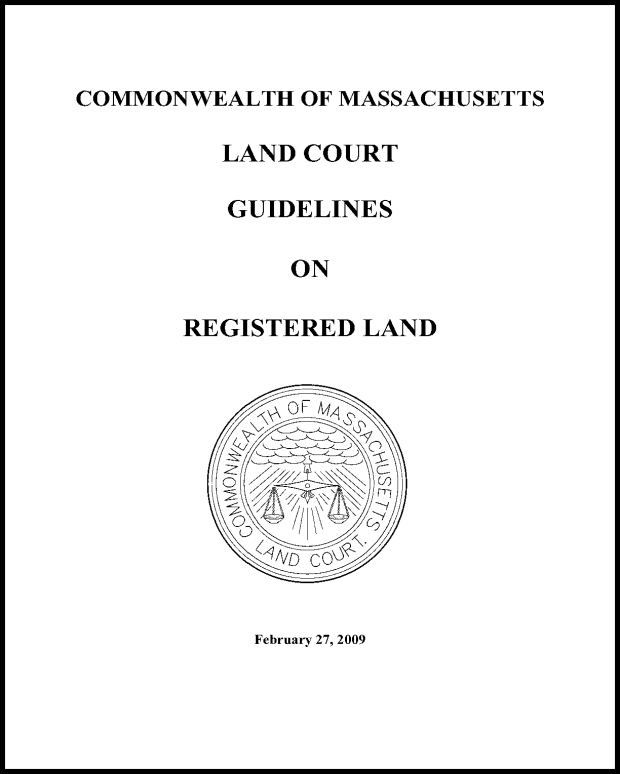 The Land Court Guidelines on Registered Land were first issued in May 2000 and were last fully revised and recompiled in February 2009. However, the Guidelines are not static. Over time, the Guidelines and corresponding forms have been supplemented and updated.  To ensure you are referencing the latest guidance and forms, review the Land Court Guidelines, Registered land memos from the Chief Title Examiner, and forms under Access registered land court forms and instructions. 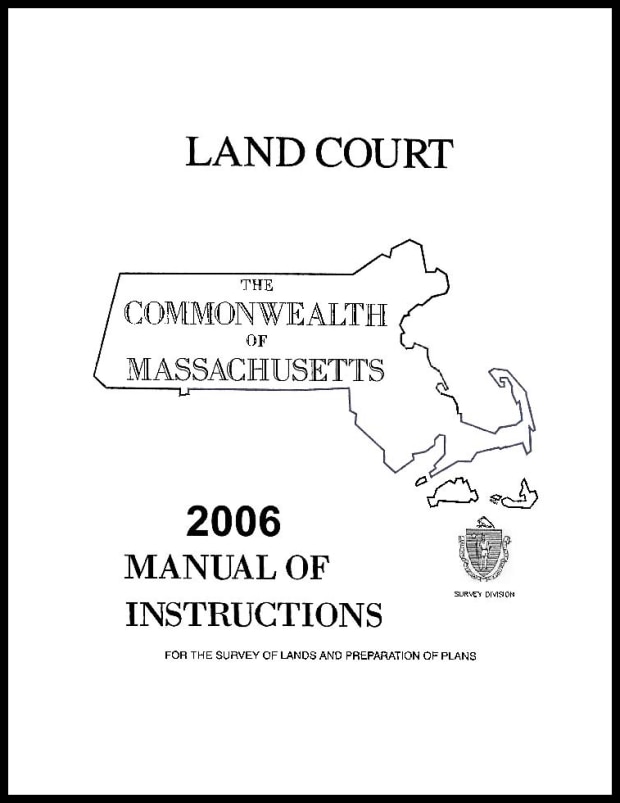 The Land Court 2006 Manual of Instructions for the Survey of Lands and Preparation of Plans is issued for the information and guidance of land surveyors preparing surveys and plans for registered land to be filed in the Land Court.  It is intended as a guide to the minimum requirements for what is commonly referred to in this commonwealth as a “Land Court Survey.”  It is not intended as a text for surveyors nor as a standard for all property line surveys.

For Land Court Survey plans, compliance with these instructions is mandatory, and no survey or plan will be accepted for filing with the court unless these requirements have been fulfilled to the satisfaction of the Land Court’s Survey Division.

The Plan Number is the manually entered sequence number which comes from the Plan Number or Land Court Case Number that appears on the Certificate of Title.

The Sequence Number is the sequence number of the SBQ cases filed in that month in that year for that same plan number.

Additional Resources for Look up your Land Court case online

The Land Court has created several forms, templates, and instructions for case filings related to registered land. You can find these forms and templates in the Registered land court forms and instructions section of the Land Court’s forms webpage. Forms and other related information may be updated or revised over time, so be sure to check the Land Court’s forms webpage before filing with the court to ensure you are using the latest versions.