The eastern coyote can be found through Massachusetts, except on the islands. This medium-sized predator can thrive in suburban, urban, and rural areas. 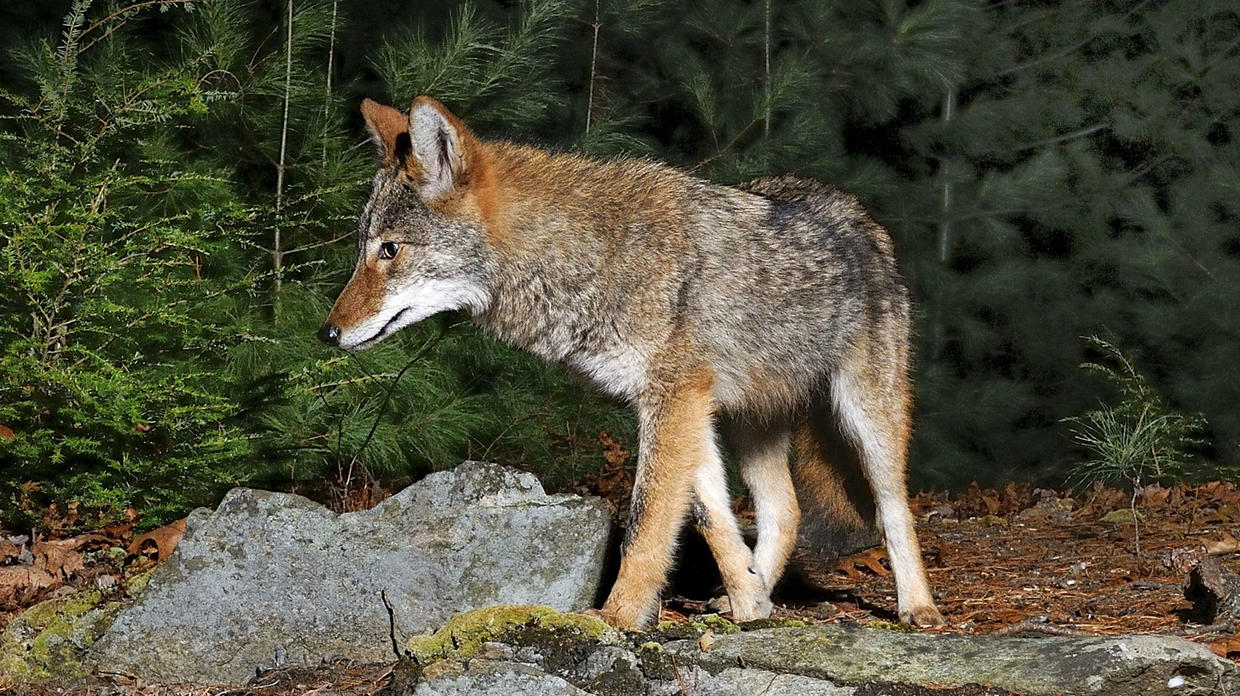 The eastern coyote is well established throughout Massachusetts except on Nantucket and Martha’s Vineyard. A medium-sized predator, it is an opportunistic feeder and extraordinarily adaptable to a wide range of habitats. Coyotes thrive in suburban, urban, and rural areas. They will utilize whatever food is naturally available, including small animals, birds, insects and fruits, as well as artificial sources such as garbage, pet food, birdseed, and compost.

Eastern coyotes are an important and valuable natural resource in Massachusetts. They are classified as a furbearer species, for which a management program and regulated hunting and trapping seasons have been established.

Get tips for preventing conflicts with coyotes here.

The eastern coyote resembles a medium-sized dog in body size and shape, but has longer, denser fur and pointed, erect ears. The tail is long, black-tipped, and bushy. Typical coat color is a grizzled gray but can vary from creamy blonde to red or nearly solid black. Typical weights for females are 33–40 pounds, while males typically weigh 34–47 pounds. A very large male may weigh in the neighborhood of 60 pounds, but such an animal is exceptional. Coyotes often look heavier than they are because of their thick fur.

An adult male and female will actively maintain a territory that may vary in size from 2 to 30 square miles. Breeding season peaks in mid-February. They give birth in a den to 4–8 pups in April or May. Coyotes maintain seasonal social units that consist of the adult pair and the pups until the pups disperse on their own in late autumn.

Coyotes are typically shy and elusive, but they can frequently be seen individually, in pairs, or in small groups where food is commonly found. They remain active year-round and do not hibernate. Coyotes communicate by vocalizing, scent marking, and through a variety of body displays. It is common to hear them howling and yipping at night, or even during the day in response to sirens and other loud noises. When one hears a family of coyotes howling, it's easy to think the area is overflowing with coyotes, but it's usually just a few coyotes with their pups. Coyotes do not howl to announce a kill; this would attract other wild animals. Coyotes howl because:

Coyotes are opportunistic feeders, meaning they will feed on whatever is most readily available and easiest to obtain. Their omnivorous diet consists of a variety of foods including rodents, rabbits, deer, birds, insects, reptiles, fruits, and berries. They will scavenge roadkills, rodents, and birds killed by cats, as well as garbage and pet food left outdoors. In suburban areas, they have been known to prey on unprotected pets, including house cats and small dogs.