To get a learner's permit, driver’s license, or Mass ID in Massachusetts, you’ll need to provide proof of citizenship or lawful presence, a Social Security number, and Massachusetts residency. Learn what documents you can use below.

The Department of Homeland Security (DHS) has extended the REAL ID full enforcement
date from October 1, 2021 to May 3, 2023, due to the ongoing COVID-19 pandemic.

Beginning May 3, 2023, every air traveler 18 years of age and older will need a REAL ID
compliant driver’s license or identification card, or another TSA-acceptable form of
identification, for domestic air travel and to enter certain federal facilities.

You’ll also need to decide between a Standard driver’s license/ID and a REAL ID driver’s license/ID. REAL ID is a federal ID that you can use to fly within the United States or enter federal buildings. To get one, you’ll need to provide additional documentation and come into an RMV service center. Learn more about REAL ID and whether or not you need one below.

REAL ID is a Federal Security Standard for IDs that was created in 2005 as a result of increased federal security measures after the September 11, 2001 terrorist attacks.

Do I have a choice of driver license/ID types?

The cost to obtain a REAL or Standard driver's license/ID card is the same. 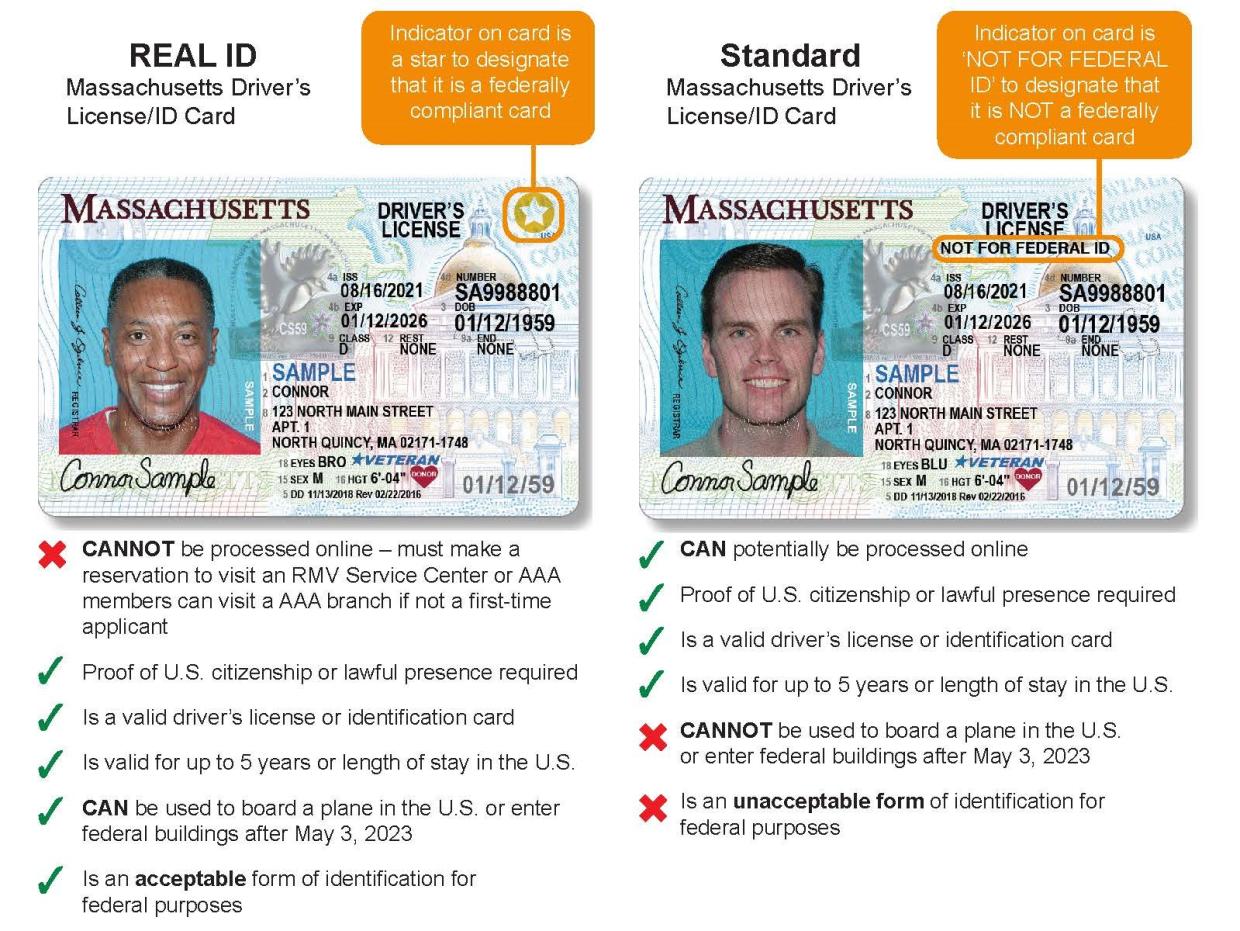 What is a Standard driver's license/ID?

What is a REAL ID driver's license/ID?

Key Organizations for REAL ID or a Standard driver’s license/ID?

Get Ready Online! All driver's license and ID transactions can be started online to save time.

You can save time at an RMV Service Center by starting any driver's license or ID transaction online. You can even finish some online.

If you can’t finish online, at the end of the application you’ll get a summary of your application and a list of documents you’ll need to bring to a service center.

Use the RMV's Online Service Center to:

Note: You can renew your driver's license/ID up to one year in advance of your expiration date.

Once you’ve decided if you want a REAL ID or Standard driver’s license/ID, get the right documents together. You’ll need to prove your:

All documents must be originals, photocopies and laminated documents will not be accepted.

A document cannot be used to prove more than one requirement.

NAME MUST MATCH for REAL ID

If your current name doesn’t match the one that appears on your lawful presence document(s), you must prove your legal name change in order to qualify for a REAL ID driver’s license/ID card. If multiple name changes, documentation for each name change must be provided. You will need to provide one of the following:

For a Standard driver’s license/ID card, a proof of name change document is not required.

1 document from this group for either REAL ID or a Standard driver's license/ID.

Lawful presence means that you’re legally living in the United States according to federal immigration laws. All U.S. citizens and lawfully permanent residents have permanent lawful presence in the U.S.

Non-U.S. citizens who are studying, working, or living temporarily in the U.S. may have temporary lawful presence that may vary in length.

For non-U.S. citizens, you need to provide valid, verifiable immigration documents as well as proof that you've been granted a legal stay in the U.S. for at least 12 months. Your license or ID will expire when your legal stay is over.

Whether you’re getting a REAL ID or a Standard driver's license/ID, you’ll need one of these:

Note: The federal government allows for some exceptions to those in temporary protected status (TPS). See Department of Homeland Security's website for current countries designated for TPS.

1 document from this group for either REAL ID or a Standard driver's license/ID.

You must have a valid Social Security Number (SSN) to apply for any learner's permit, driver's license, or ID card. The RMV will validate the SSN you provide against computer records at the Social Security Administration (SSA). If you do not have an SSN, you may request an application for one by calling (800) 772-1213.

If you’re getting a Standard driver’s license/ID, you’ll only need to provide your valid SSN.

If you’re getting a REAL ID, you’ll need to bring 1 of the following documents displaying your 9-digit SSN:

If you do not have an SSN, you should apply for one at a Social Security office as soon as possible. If you are denied an SSN, you may still qualify for a Massachusetts driver's license or ID card if you can meet other identification requirements. However, to prove that you applied for an SSN, you must present the written denial notice the SSA provided you. The RMV requires your SSN or denial notice to confirm your identity and to maintain your license and driving records.

Note: All CDL applicants must have an SSN.

To prove Massachusetts residency, you’ll need a document showing your current residential address. A P.O. Box isn’t acceptable. Neither is a document mailed “in care of.”

You’ll need 2 of these documents for a REAL ID. Standard driver's license/ID applicants need 1 of the following:

Other acceptable forms of federal ID for flights

You may also use an active passport, passport card, or even a Global Entry card to fly domestically. You’ll also be able to use these TSA-approved documents to get through airport security:

Additional Resources for Other acceptable forms of federal ID for flights