CZ-Tip - Learn What Lurks in a Massachusetts Tide Pool

Find ways to get to, protect, and enjoy the coast with tips from the Massachusetts Office of Coastal Zone Management (CZM).

As the tide recedes along the shore, isolated pools of seawater collect in low spots and form tide pools. Tide pools are typically found on rocky shorelines where water gets trapped between the rocks, but can also form on sandy or mixed sediment shores where seawater collects in depressions at low tide. Tide pools provide habitat for many marine plants, algae, and animals. They serve as temporary shelters (or prisons!) for creatures stranded when the tide goes out and more permanent homes for species adapted to survive the stresses of changing tides, waves, salinity, temperature, and oxygen. Given that Massachusetts has more than 1,500 miles of coastline, you don’t need to go far to explore the diverse world of tide pools. This tip covers common plants and animals in a Massachusetts tide pool, invasive tide pool species, some of the best tide pool spots in the state, and suggestions for having a responsible, hands-on tide pool experience.

For a printer-friendly version of this tip, see CZ-Tip - Learn What Lurks in a Massachusetts Tide Pool (PDF, 2 MB).

Life in a Tide Pool

Tide pools provide a glimpse into the daily interactions of marine life. Here you can witness fierce battles between predators and prey, exemplary (yet borderline weird) displays of survival, and quirky methods of reproduction and regrowth. The following are a few examples of common plants and animals in Massachusetts tide pools with highlights of some of their more uncommon characteristics. 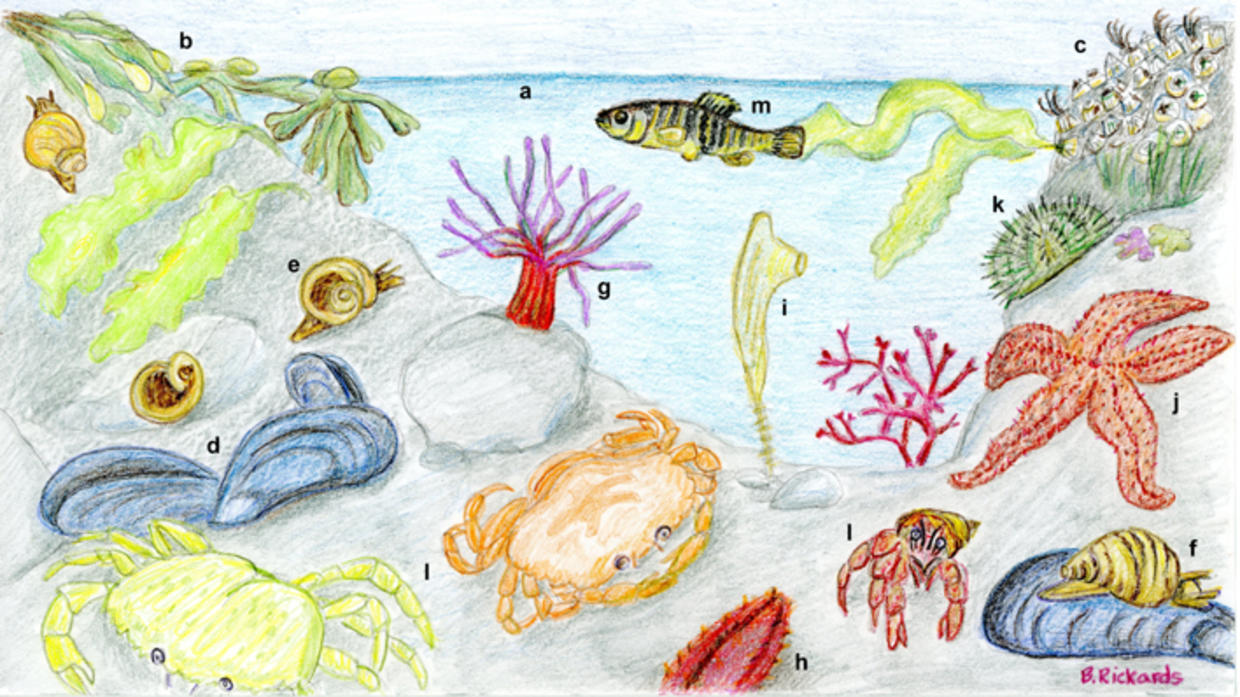 a. Plankton - Named for the Greek word for “drifter” or “wanderer,” plankton are the tiny plants and animals that float in the ocean with the currents. The tiny plants are called phytoplankton and they produce their own food through photosynthesis, a process that also releases oxygen into the air (it is estimated that 80% of the oxygen on Earth is produced by phytoplankton). The tiny animals are the zooplankton, some of which remain zooplankton all their life while others grow to become strong-swimming, non-plankton adults. (Fun fact: There can be 50,000 plankton in a gallon of sea water.)

b. Bladder Wrack and Other Seaweeds and Algae - Bladder wrack and knotted wrack, two common seaweeds in a tide pool, use air bladders to float when the tide is in (giving them access to sunlight and creating a forest under the water) and then lay flat on the rocks when the tide is out, forming a thick cover for other species. Sea lettuce is the green alga that has bright green silky sheets and ruffled margins. Irish moss (the small reddish-purple, fan-shaped seaweed) and other species of red algae are abundant where they can be submerged for most of the day. (Fun fact: Simple seaweeds may have been the Earth’s first plants.)

c. Barnacles - When barnacles are young, they are free swimmers and resemble tiny shrimp. Once they find an appropriate place to settle down, they glue their heads to a rock and begin the process of building their shells. The result—pointed shells with doors that click open and shut (and that are known for their scrape-inducing characteristics on unprotected skin). When the barnacles open, feathery legs extend out of the shells and sift the water for food, namely plankton. (Fun fact: The adhesive property of the glue that barnacles make to attach to rocks is being researched for use in dental work.)

d. Blue Mussels - Also known as the common mussel, these edible mollusks typically live between the high-tide and low-tide line, often just beneath the knotted wrack and bladder wrack. They have a slender foot for temporarily holding themselves in place but use their tough byssal threads to more permanently adhere to the rocks. By spinning and cutting these threads, mussels can also use them to move. (Fun fact: Mussels can use byssal threads to tether and immobilize species, such as the dog whelk, to avoid being preyed upon.)

e. Periwinkles - These are the snails that you find peacefully grazing on seaweed and other plants. Periwinkles move slowly on one foot and scrape up food with a coiled tongue. When the periwinkle pulls itself into its shell, it will close a little trap door called an operculum. (Not-so-fun fact: The common periwinkle, a non-native invasive species, has out-competed some native species, altered the distribution and abundance of algae on rocky shores, and even converted soft-sediment habitats to hard substrates by preventing the accumulation of sediment and algal cover.)

f. Dogwinkles/Dog Whelks - Though similar to periwinkles, these somewhat longer, pointier, and whorled sea snails are ferocious carnivorous. They feed on periwinkles, mussels, barnacles, and clams by grinding a round hole right through the shells with their drill-like tongues and sucking out the animal inside. (Fun fact: The color of the New England dog whelk depends on what it eats—those that consume mussels are dark reddish-brown and those that eat barnacles are white or yellowish-brown.)

g. Sea Anemones - The sea anemone may look harmless, but it is a fierce predator. The petal-like arms or tentacles on this animal contain stinging capsules that paralyze prey, such as shrimp and sea stars. When alarmed, the anemone will pull the tentacles in and shrink down to a small blob. The anemones that are common to Massachusetts do not have enough stinging power to harm humans. (Fun fact: A sea slug is the only animal that can eat the stinging tentacles of the anemone.)

h. Sea Cucumbers - Even though they are named after a vegetable, sea cucumbers are animals. The tube feet that cover their body are used to attach themselves to rocks and other surfaces, and the modified tube feet around their mouth are used to capture food such as zooplankton. The most common sea cucumber in New England is the orange-footed, which grows up to 12 inches long. (Fun fact: Dried sea cucumbers are considered a delicacy in Asia.)

j. Sea Stars (aka Starfish) - It is easy to recognize sea stars with their spiny skin and star-like shape (typically with five arms, though some species have more). Each of these arms contains an eye that is sensitive to light. The tube feet on the underside of the sea star help the animal move and feed. The sea star has the ability to pry apart two halves of a mussel shell, push its stomach out its mouth and into the mollusk to digest the animal, and then pull its stomach and the mussel contents back in! (Fun fact: Not only can a sea star regrow a lost arm, but an arm can regrow the sea star body.)

k. Sea Urchins - Often found submerged in the deeper parts of the tide pool, sea urchins are noted for their long spines, which help fend off predators. Under the spines lies a hard outer body and tubed feet that help the animal move. When the urchin dies, the spines fall off. Sea urchins use their beak-like mouth to voraciously feed on kelp, though they will also feed on plankton, periwinkles, and even barnacles and mussels. (Fun fact: Sea urchins will react immediately if something touches them by pointing all of their spines towards the area of provocation.)

l. Crabs (PDF, 3 MB) - The most common crab in New England is the non-native green crab, an invasive species that lives in crevices in the rocks, in kelp, or under submerged rocks. The Asian shore crab, another invasive and voracious predator, competes with the green crab and native crabs for habitat. The native rock and jonah crabs can often be found under rocks deep in a tide pool. Spider crabs may occasionally be found in a tide pool—they are the ones camouflaging themselves with algae. Hermit crabs, which have no hard exoskeleton and actually look like tiny lobsters with a hook-like abdomen, inhabit discarded periwinkle shells for protection. (Fun fact: Crabs can re-grow missing legs and claws.)

m. Mummichogs and Other Fish - Small fish, such as mummichogs (also known as killifish or salt water minnows), tautogs, blennies, naked gobies, and rock gunnels, may occasionally get caught in a tide pool. Fortunately, most of these fish are well adapted to changes in oxygen, salinity, and temperature and can survive the tidal cycle. (Fun fact: Some mummichogs will walk across the rocks on their fins to get back to the ocean.)

Some of the creatures that inhabit Massachusetts tide pools are travelers that have overstayed their welcome. Marine invasive species—plants or animals that have invaded marine ecosystems beyond their natural or historic range—can jeopardize the ecology and economy of the Bay State by out-competing native plants and animals and reducing biodiversity. To learn more about invasive species, such as the European green crab and various species of sea squirts, visit the following resources. 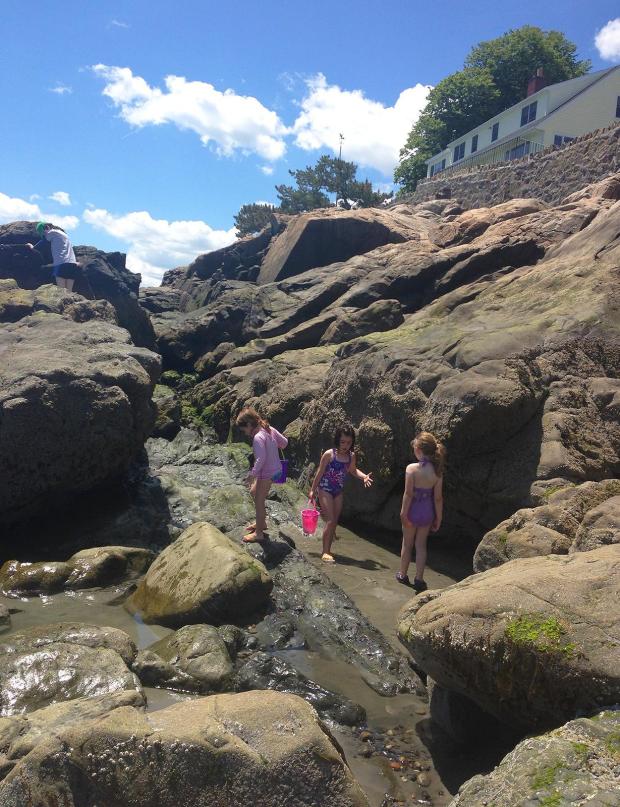 Tide pools can be found in many nooks and crannies along the coast, but if you are looking for some notable tide pools loaded with diversity, check out the following locations and links. Don’t forget to confirm that the tide will be low before you head out—see the Massachusetts Marine Trades Association website for tide charts all along the region’s coast.

Though tide pools are an excellent, hands-on way to learn about diverse marine life, the critters need to be handled with care. Here are a few tips for being responsible at the tide pool.