Wild turkeys, the official game bird of Massachusetts, thrive in a variety of habitats across the Commonwealth, including in urban areas. 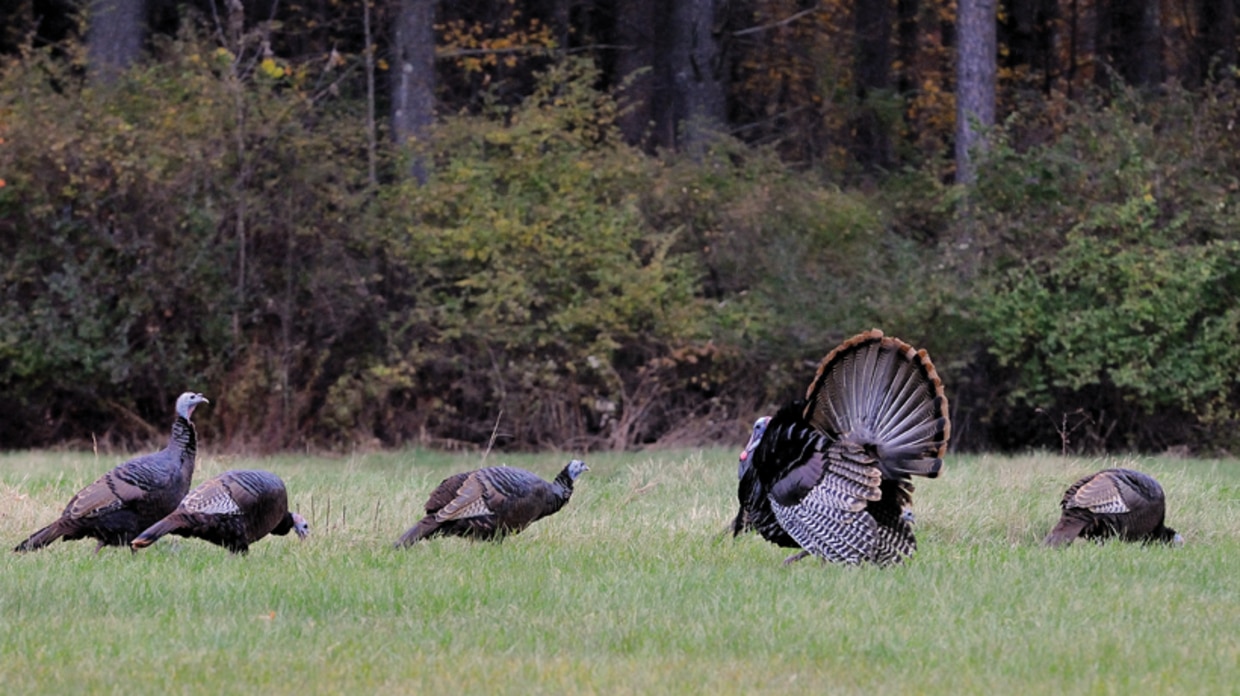 Before European colonization of the Americas, the wild turkey was widespread in Massachusetts. Due to habitat loss, turkeys were extirpated from the state, and the last known native bird was killed in 1851. In the 1970s, MassWildlife biologists trapped 37 turkeys in New York and released them in the Berkshires. The new flock grew, in an ideal mixture of agricultural and forested lands, and by fall of 1978 the estimated population was about 1,000 birds. As more birds moved in from adjacent states, turkeys soon ranged throughout most parts of Massachusetts west of the Connecticut River. In-state transplants, conducted until 1996, continued to expand their range into central, northeastern, and southeastern areas of the state. In 1991, the wild turkey was named the state’s official game bird. Today the populations are estimated at  between 30,000 and 35,000 birds! Under careful management, the future looks bright for turkeys. Sportsmen, naturalists, and other wildlife enthusiasts welcome their return.

Wild turkeys are an important natural resource in Massachusetts. They are classified as game birds, for which a management program and regulated hunting seasons have been established.

Find tips for preventing conflicts with turkeys and what to do with aggressive turkeys here.

The wild turkey is a strikingly handsome bird; black to blackish-bronze with white wing bars, blackish-brown tail feathers and a blueish-gray to red head. “Toms” or male wild turkeys weigh about 16–25 pounds. They sport a hairlike “beard” which protrudes from the breast bone. When a tom is strutting, its head turns bright red, pale white, or vibrant shades of blue. Females, called hens, are smaller, about 9–12 pounds, and are generally less conspicuous, typically dull brown with a blueish-gray head.

Wild turkeys are active during the day; roosting in large trees at night to avoid predators. In residential areas, it is not uncommon for turkeys to roost on railings, roofs, or sometimes on vehicles. Gobbling, during breeding season, usually starts in March and can last through May. This is when the males puff out their feathers, fan their tails and “strut their stuff.” Hens lay eggs after the first mating. The nest is a shallow, leaf-lined depression on the ground, and contains 12 to 15 eggs. Hatching occurs after an incubation period of 28 days. Broods usually appear in the first week of June. The young poults are active as soon as they hatch. Predators such as foxes and hawks may take a few young turkeys, and cold spring rains can easily chill the poorly-feathered young birds. Young turkeys remain with their mother for at least 4 to 5 months. Turkeys learn from each other, often by imitation, and by associating with older, more experienced birds. They remember the layout of their home ranges and the location of various foods.

Wild turkeys seasonally exploit a diversity of food items, including plant material, seeds, nuts, berries, insects, and invertebrates. In the fall, they feed on acorns, beech nuts, hickory nuts, and seeds. In the winter, turkeys avoid areas with deep, fluffy snow. During the summer, turkey poults rely on insects that are extremely protein rich, which enables the small poults to grow and mature quickly. Turkeys scratch the ground searching for food.

Wild turkeys are habitat generalists and thrive in a variety of environments in Massachusetts. They utilize agricultural lands, forests, and suburban and urban habitats. Areas with many different types of habitat types are probably the most productive for turkeys because they provide an optimal mix of food and cover across the range of seasons experienced in Massachusetts. Turkeys in suburban and urban areas rely heavily on bird seed located in and around bird feeders and can become quite habituated to specific locations.

Wild turkeys live in flocks organized by “pecking order.” Each bird is dominant over or “pecks on” birds of lesser social status. Turkeys may attempt to dominate or attack people that they view as subordinates. This behavior is observed most often during breeding season. Once bold behavior is established, it can be very difficult to change.