This page is the primary source for 2000 Census data. All of MassGIS' holdings for the 2000 decennial Census can be found here.

The US Bureau of the Census developed and now distributes the Topologically Integrated Geographic Encoding and Referencing System (TIGER) extract data sets as part of the 2000 Decennial Census. These files are available nationwide and serve as a geographic framework for Census summary statistical and demographic data. EOEA has obtained these files and has reprocessed them into Arc/INFO format and the Massachusetts State Plane Coordinate System to match the existing MassGIS data base.

The Census Bureau developed the "TIGER/Line" geographical database to support its census enumeration and publication programs starting with the 1990 Decennial Census. Linework contained in these files includes the boundary features that the Bureau uses in preparing its data tabulations, including roads, streams, and political boundaries. Much of this linework is comparable to the 1:100,000 scale Digital Line Graphs (DLGs) produced by the U.S. Geological Survey, and in fact DLGs of roads and streams were the source of much of the linework compiled outside of metropolitan areas. Unlike DLGs, the TIGER/Line data includes feature names and, in metropolitan areas, ranges of street addresses. Street name and address attributes facilitate the process of "address-matching" or "geocoding"-- linking addresses with geographic coordinates in a GIS.

The TIGER network of lines forms the boundaries of "census block" polygons, the smallest units used by the Census Bureau in tabulating its data. Census blocks are typically the size of city blocks: in fact, they often are city blocks, but they can be bounded not only by streets but also by other linear geographic features in the TIGER files including streams and political boundaries. Each of these polygons is assigned a census block number in the TIGER file which is used to reference tabular data published by the Census Bureau.

The tabular data files ("matrices") published by the Census Bureau, not the TIGER files themselves, contain the demographic summaries produced as a result of the 1990 Census. However, in the reprocessing of TIGER files for use at MassGIS, a few selected data attributes were extracted from these matrices and incorporated into the MassGIS Census datalayers.  (only pop and logrecno)

MassGIS has extracted and reprocessed data from the original TIGER files for use in its Geographic Information System. The reprocessed Census datalayer has been converted into the Massachusetts State Plane (NAD83 Meters) Coordinate system. The data have been extracted into six (6) statewide layers and are being distributed in Shapefile format, as well as a series of demographic tables:

These datalayer were produced from the post-census release of the 2000 TIGER/Line files for the fourteen counties of Massachusetts, as well as periodically released demographics reports and summary files. The raw data can be downloaded from the U.S. Census Bureau website in the following locations:

and then converted into polygon (blocks) and arc (TIGER linework) shapefiles using ArcView3.3. The individual county shapefiles were merged together to form a single statewide shapefile. The block groups and tracts shapefiles were created by dissolving the block shapefile.

These three fields uniquely identify each block, blockgroup, and census tract in the country while also providing a means of extracting a given polygon’s place in the census geographic hierarchy.

https://www.census.gov/data/datasets/2000/dec/summary-file-3.htmlThe TIGER/Line file geography is inherently stored at the finest resolution of the census data, the block level. To derive blockgroup and tract geography shapefiles, the statewide shapefile of blocks was aggregated by dissolving upon the Bg_id and Ct_id values respectively. Copies of the unmodified geography (which extends into the ocean for coastal areas) were also edited by interactively removing all offshore ocean polygons with a population of 0. This method was chosen over a true “clipping” of the data by the existing MassGIS State Outline in order to preserve the topographical integrity of the census data while providing a more pleasing coastline for display purposes. Both the unedited and “clipped” versions have been made available for download (see image at left).

In the block-level datalayer, fields representing the state legislature districts, the 108th congressional districts, and Massachusetts cities/towns were included to facilitate the extraction of statistics at those levels of geography. These do not exist in the blockgroup and census tract files because those boundaries do not always follow the same boundaries of the political entities (i.e., some blockgroups cross town boundaries). Several fields included with the raw TIGER/Line data that designated other units of aggregated geography such as voting districts, urban areas, and other non-standard county subdivisions were dropped from the attribute tables of the shapefiles. There are presently no plans to include these delineations in the datalayers.

A unique identifier was included in the primary attribute tables of the geography files to facilitate linking to demographics reports released periodically by the U.S. Census Bureau, as well as the selected tables MassGIS itself has made available through arbitrary extractions. In each of the block, blockgroup, and census tract attribute tables, the field LOGRECNO is included. This is the same field used within the demographic profiles and Summary Files 1 and 3. The values for LOGRECNO were determined as follows:

The different summary levels represent the different combinations of the geographic hierarchy. (See Summary Level Sequence Chart in the technical documentation of SF1 and SF3 in Adobe .PDF format.) Any joins or links of census-derived demographics tables to the datalayers should be done using LOGRECNO as the common field.

The TIGERTOOL process used to produce the polygon block-level geography also produced the arcs associated with linear census features. The linework used to create the census blocks has its own separate set of arc attributes that describe characteristics relating to the roads networks, some water features, political boundaries, and associated feature names/address ranges.

When the county-based shapefiles were merged into a statewide shapefile, duplicate arcs that fell along county boundaries resulted. To eliminate these duplicate arcs, each pair of segments with the same unique centroid location coordinates was identified. The attributes of one arc were transferred to its counterpart, and the duplicate line was then deleted, leaving a single, fully-attributed arc along all county boundaries. Aside from the removal of duplicate arcs after the merging process, the linework remains largely untouched. Most of the original attributes are intact and unmodified.

MassGIS has elected to provide shapefiles with scaled-down attributes, with demographics information available in a series of related tables. Numerous tables have been extracted from the census reports, as well as from other sources. The tables have all been converted into DBF format and separated into three sections, one section each for data at the block level, at the blockgroup level, and at the census tract level. To produce these tables, Summary File 1 (SF1) and Summary File 3 (SF3) were acquired from the U.S. Census Bureau website in the summer of 2002. SF1 consists of 39 attribute table files while SF3 has 76 table files. (Each file contains a subset of the hundreds of demographics tables tabulated by Census 2000). Both also have geographic header information stored separately to facilitate linking to the data. These tables were extracted and the .uf* extensions were renamed to .txt, allowing import into an Access database created for each summary file. Using the data dictionaries (Chapter 7 -> Identification Section -> Table (Matrix) Section) in the technical documentation of SF1 and SF3 as a guide, queries for arbitrary sets of attributes at the appropriate summary level were conducted. These queries were exported into .dbf tables and the field names were changed to somewhat more meaningful values to facilitate their use. Lookup tables that explain the contents of every field have been created for each of the three geographic entities. The lookup tables contain the following information:

All demographics tables contain the LOGRECNO field to use for joining to the polygon shapefiles. Descriptions of the tables and links for download are found on the Web pages devoted to each relevant shapefile (Blocks, Block Groups , Census Tracts ). Also note that the LOGRECNO field may be used to join any demographics tables obtained directly from the Census Bureau to any of the shapefiles MassGIS provides, at the appropriate summary level (block, block group, tract).

Users are reminded that the tables provided by MassGIS -- though ready to use with with the shapefiles and formatted with meaningful field names -- represent a subset of the demographics data compiled by the Census Bureau. The complete set of data currently available may be downloaded from the links in the "Source" section above

Please note that using the data directly from the Census Bureau may require considerable processing. Database experience and at least a familiarity with the contents of SF1 and SF3 (see their technical documentation) are strongly recommended to ensure their proper use. 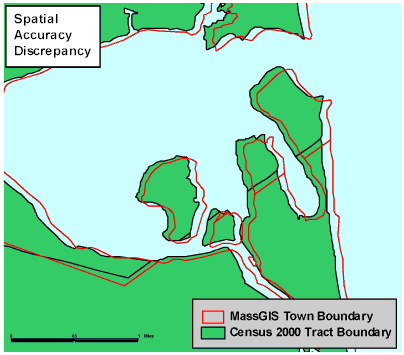 The development of a nationwide, standard 1:100,000 scale geographic data set for the 1990 Census has been hailed as the "backbone" of a federal geographic data infrastructure. The TIGER files are a unique resource, containing a wealth of geographic data attributes unavailable in earlier data sets such as the 1:100,000 scale Digital Line Graphs published by the U.S. Geological Survey. The link between the TIGER files and Census Bureau data -- and potentially with data to be published by other federal agencies -- makes TIGER data an attractive option for GIS users. Furthermore, the relatively low cost of Census Bureau data and its availability online and at depository libraries makes TIGER data easily accessible.

The geographic accuracy of the Census 2000 linework does not follow the same standards as set forth for other datalayers developed by MassGIS. There will likely be small discrepancies in the location of census features when overlaid and compared to other data in the MassGIS library. Please be aware of these differences when performing analyses involving levels of spatial accuracy that exceed the census data specifications. Such discrepancies become more apparent at larger scales. A good example of this is in the vicinity of the town of Newbury’s coastline, where a significant shift between the TIGER boundaries and the MassGIS town boundaries is noticeable.

MassGIS recommends that when mapping Census blocks, block groups and tracts, users should display the TIGER-based linework for base map features (hydrography, roads, trains, town boundaries) distributed by MassGIS (see list of layers above). Due to the large volume of data, and in order to preserve the original linework developed by the Census Bureau, MassGIS does not intend to edit or make corrections to the TIGER linework.

The data presented here could not have been compiled without the assistance of the Regional Office of the Census Bureau in Boston, as well as the Donahue Institute. Their familiarity with the Census data makes them ideal points of contact for more detailed questions pertaining to the acquisition, maintenance, dissemination, and analysis of Census 2000 data.

MassGIS will periodically update its Census data in correlation with public releases by the Census Bureau. A re-release of the 1990 Census data in a standardized GIS format for multi-year comparison purposes is planned, but no timetable currently exists.

For more information about the Census products and technical specifications, please visit:
http://www.census.gov/main/www/cen2000.html

For information specifically about the TIGER/Line files, see:
http://www.census.gov/geo/maps-data/data/tiger-line.html

Thanks, your message has been sent to MassGIS!