Learn about the Sacco & Vanzetti: Justice on Trial exhibit at the John Adams Courthouse.
Skip table of contents

The Sacco and Vanzetti: Justice on Trial exhibit on the trial of Nicola Sacco and Bartolomeo Vanzetti and its aftermath is now open at the John Adams Courthouse. 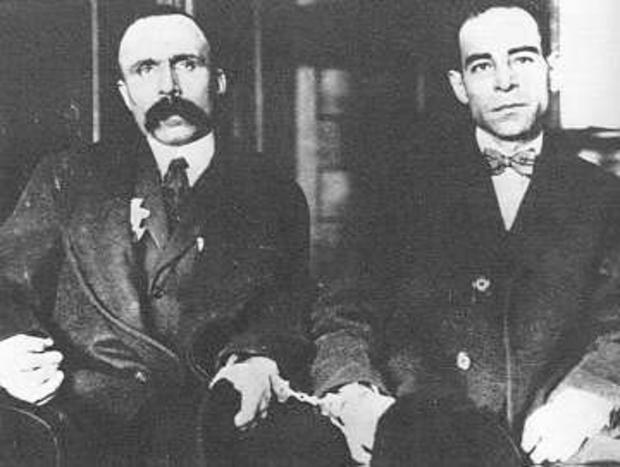 The exhibit is designed to aid the understanding of this crucial episode in American history, and the importance of our striving always to be, in the enduring and inspiring words of the Massachusetts Constitution, "a government of laws and not of men."

Open file for Exhibits at the John Adams Courthouse

The 1920's trial and executions of Italian anarchists Nicola Sacco and Bartolomeo Vanzetti trouble and intrigue us decades later. Experts continue to debate whether one or both men committed armed robbery and murder. On one subject, however, there should be no debate. Sacco and Vanzetti did not receive a fair trial. Sacco and Vanzetti were charged with committing robbery and murder at the Slater and Morrill shoe factory in South Braintree. On the afternoon of April 15, 1920, payroll clerk Frederick Parmenter and security guard Alessandro Berardelli were shot to death and robbed of over $15,000 in cash. Eyewitnesses reported that two men committed the crimes and then escaped in a car containing two or three other men. Sacco and Vanzetti were arrested several weeks later on a trolley car. Both were armed, and Sacco possessed a flyer announcing that Vanzetti would speak at an upcoming anarchist rally. No other arrests were ever made; none of the stolen money was ever linked to them or recovered. The arrest and subsequent trial of Sacco and Vanzetti occurred at a time of great tension and unrest in the United States. World War I (the United States entered the war in 1917) and the Bolshevik (Communist) Revolution in Russia (1917) both contributed to anti-immigrant sentiment. Prejudice was particularly strong against newcomers who espoused the radical ideas of anarchism, communism, or socialism. The period of 1919-20 came to be known as the "Red Scare" and was marked by numerous labor strikes, widespread fear of radicals, and a series of bomb attacks against government officials, among them United States Attorney General A. Mitchell Palmer. The United States government responded with a series of raids (known as the "Palmer Raids") during which thousands of suspected radicals were arrested in over twenty states, including Massachusetts.

Although Sacco and Vanzetti were never implicated in acts of violence, they were Italian immigrants and avowed anarchists. Their trials for armed robbery and murder occurred in this atmosphere of social tension and turmoil. The trial judge permitted the prosecution to present extensive evidence about their anarchist ideology, immigrant background, and refusal to register for the military draft during World War I. On July 14, 1921, the jury convicted both men.

The rules that governed review of trial proceedings contributed to the unfairness of the proceedings. The trial judge had sole authority to decide the defendants' repeated and compelling motions for a new trial. He denied them all. Appellate rules in effect at the time denied the Supreme Judicial Court the authority to review the strength of the evidence presented at trial. The Commonwealth of Massachusetts executed Sacco and Vanzetti on August 23, 1927.

From the 1920s to the present, this case has inspired books, movies, plays, poems, paintings, and music. The photo below, taken on March 9, 1923, was the basis for a famous portrait by artist Ben Shahn. Filmmaker Peter Miller premiered his documentary about this case in 2006.

This exhibit is designed to aid the understanding of this crucial episode in American history, and the importance of our striving always to be, in the enduring and inspiring words of the Massachusetts Constitution, "a government of laws and not of men."